Reshard Langford cleaned up a lot of messes. - Photo by Mike Zarrilli/Getty Images

One of my small pleasures are the weekly retro Billboard Top 40 countdowns on SiriusXM. (Another small pleasure is knowing TOOTBLAN made it into the MLB.com glossary, but never mind that.) The 1960s one always includes some extras. One is the "Bubbling Under" song of the week, which was the one that finished #101 on the charts. Sometimes they’re actually pretty good, and you can’t help but wonder why it was some obscure nothing that peaked at #80.

But lo and behold, during a recent 1969 countdown, this was making its chart debut at #101:

By mid-September it would reach #1 (for better or worse) and stay there for four weeks. Even the radio DJ was like "what is this doing down at #101? oh well."

It’ll also be camping out in your head for the next four hours, so I’m sorry about that.

My point (I have one!) is that sometimes things get overlooked at first. Remember when Bobby Johnson would sign some random 2-star recruit, and then suddenly it’s Jordan Matthews or whatever? Same thing. And given that, I decided to mine the past back to 1980, and find ten guys who maybe just missed the Top 100. I’m sure there were a lot more pre-1980, but that era is so different I don’t know how to fairly judge it.

Anyway, don’t view this article as a criticism of the Top 100 voting. View it as a celebration of ten other guys who maybe deserved a second look.

Edwards started his career as a QB before moving to RB as a sophomore. His career rushing totals are modest — 692 yards on 197 carries — but his backfield receiving totals are otherworldly. After catching 43 passes in 1982, he caught 97 passes for 909 yards in 1983 (and, in the most "because Vanderbilt" thing ever, scored zero TDs).

Edwards’ 1983 total led the entire NCAA. His teammate Chuck Scott joined him in the Top 10 with 70 catches of his own. Meanwhile, the nearest total on any other SEC team was 52 catches by Eric Martin of LSU. Edwards literally doubled up the receptions of every other SEC WR. I have no idea what all those wishbone coaches were thinking at the time, but I bet it would have been a fun interview.

He caught 60 more passes in 1984, once again leading the SEC, and good for eighth nationally. He ended his Vanderbilt career with 200 receptions, an SEC-leading career total at the time.

Woods was a local product from Gallatin, known to fans in the 80s as "Goo Baby" for reasons I don’t know (if you know the origin of his nickname, please share).

While George McIntyre’s teams were baffling the early 80s SEC with the forward-thinking notion of a pass, Woods was quietly plugging along, actually running the ball and keeping opposing defenses honest. He was a workhorse over his 4 seasons, carrying the ball 619 times for 2,490 yards, good for fourth all-time in Vanderbilt history. He also added 48 receptions his first two years.

Woods had a cup of coffee with the New England Patriots in 1987, appearing in 2 games. 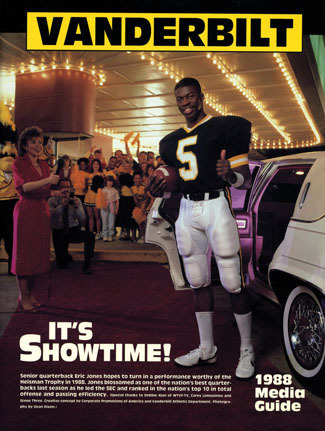 Tell me that media guide cover isn't awesome. You can't.

(Aside: Old media guide covers are seriously the best. Check out the ones available on archive.org. Jamie Winborn hovering over Vanderbilt Stadium like Godzilla! The Bomb Squad digging a well for some undefined reason! Look at that David and Goliath basketball one from 1950! You could write a whole silliness article on these.)

...or if only Watson Brown had another 10 DeMond Winstons.

Winston came out firing on the defensive line, rolling up 138 tackles and 7 sacks his first two seasons. After Chris Gaines graduated in 1987, Winston moved to MLB to anchor the defense. He spent his junior season adjusting, only (?) accumulating 122 tackles, before rolling through 1989 with 169 tackles (70 solo) and 5 sacks.

The Saints drafted Winston in the 4th round in 1990, and he appeared in 50 NFL games over the next 4 seasons.

Harris first showed up on the SEC radar his sophomore season, hauling in 45 receptions for 653 yards and 6 TDs. All of those were Top 5 SEC totals in 1989. After switching to RB his junior season, Harris tore up the field in 1991. In 11 games, he tallied 229 carries for 1,103 yards, a Vanderbilt single-season record that stood for over two decades. He was also a prolific kick returner, returning 74 balls for 1,614 yards over his career.

Post-Vanderbilt, he was drafted in the 3rd round by the Houston Oilers as a DB and kick returner. In a 12-yard NFL career, he played in 183 NFL games, starting 92 of them. His final NFL stats include 626 tackles, 11 INTs, and over 5,500 kick return yards.

In 2011, he was named an SEC Legend by the Southeastern Conference. 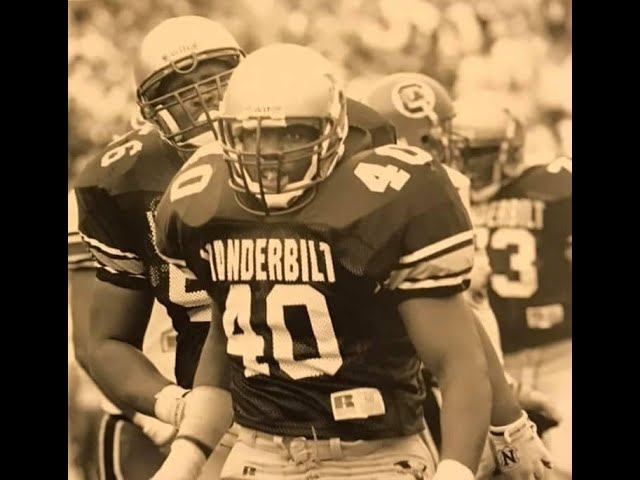 His LB duo with Shelton Quarles isn’t as well remembered as Jamie Duncan and Jamie Winborn, or Jonathan Goff and Marcus Buggs, who was inexplicably listed a DB in the Top 100. Both still did their part to keep games close while Gerry DiNardo’s 1993 offense was passing for 0 TDs (and 13 INTs, because of course). They deserve credit for that.

Collins appeared in 3 games for the Cincinnati Bengals in 1995, and I believe he played on practice squads for another couple of seasons.

Ah, the personal entry. Johnson was a tiny 5’7", 178-pound waterbug back with speed for days. The problem was, he was stuck playing in the 1990s, when Gerry DiNardo and Rod Dowhower were trying to abolish the entire concept of offense. That meant defenses could stack 9 guys on the line of scrimmage, and so they did every single play.

Despite this obvious handicap, as anyone who’s watched a Vanderbilt game from this era can attest, Johnson scampered for 877 yards in 1994 and miraculously ran for 1,072 yards in 1995. It was the last 1,000 yard season for a Vanderbilt running back until 2011. If only he’d had a chance to play on a team with a functional passing game.

I still think he was the best Vanderbilt RB I’ve seen. 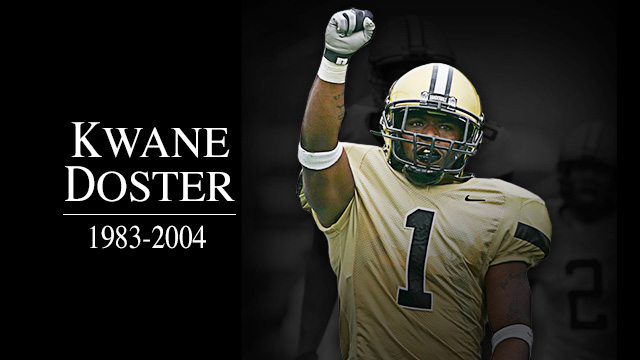 I don’t think I have to type much here.

Doster kicked off his career in style, setting a team freshman rushing record with 798 yards, and becoming the first Vanderbilt player to ever win SEC Freshman of the Year (over teammate Jay Cutler, no less). Although his offensive usage dropped some in 2003 and 2004 as Bobby Johnson realized that oh hey, this Cutler kid can pass, Doster’s kick return numbers stayed high. In his three seasons, he tallied 1,759 yards in kick returns, along with his 1,621 yards rushing.

Tragically, he was gunned down during Christmas 2004 by a scumbag during a drive-by shooting. Sometimes, I still wonder what 2005 would’ve looked like with Cutler at QB, Doster at RB, and a freshman Earl Bennett at WR. The Kwane Doster Community Center stands in Tampa, Florida today in his honor.

I have tried to avoid commenting on the actual Top 100 list anywhere else in this piece, but from any reasonable perspective — stats, talent level, or popularity contest — Kwane Doster’s omission is baffling to me.

Langford was a timebomb in the secondary, showing up on the All-SEC Freshman Team in 2005. He’s most remembered for flying up and stuffing RBs — 171 tackles and 16.5 TFLs from his safety spot — but he also picked off 11 passes, returning them for 216 yards and a TD.

Everyone remembers DJ Moore and Myron Lewis at CB, but Langford was their equal at safety, and the three combined with Ryan Hamilton and Darlron Spead to produce probably the best secondary in Vanderbilt history. His work off the field also deserves a hat tip, as he spent his summers mentoring kids at the Martha O’Bryan Center.

The pros eventually paid attention. Although he went undrafted, he managed to latch on with the Kansas City Chiefs and put together a 3-year NFL run.

Injuries never let him reach his full potential, but I'm not sure any Commodore ever had a freshman season as exciting as Warren Norman’s. Rushing for 783 yards (along with 19 receptions) would be noteworthy, but it was his kick returning that made everyone take notice. In 2009, he rolled up 1,050 yards of kick returns, a then-SEC record. Three of his returns went for TDs, and a fourth was called back against Army thanks to a completely unnecessary hold. He also broke Herschel Walker’s SEC freshman all-purpose yardage record, which dated back to 1980.

Unfortunately, a broken hand against Arkansas and repeated knee injuries kept Norman from ever really being the same on the field, and ended his career before his senior year. Nonetheless, no one who watched his freshman season has forgotten exactly how much fun he was to watch, or how much potential was there.

And that’s that. Thanks to all of these players, along with Greg Zolman, Brandon Barden, Music City Bowl MVP Brett Upson, and so many others that I’m sure still linger in the back of our minds.