Vanderbilt is shaking things up on the roster after a disappointing 0-2 start according to the team's latest depth chart. Pass rusher Caleb Azubike will return to the defensive line, while a true freshman makes his first appearance amongst the quarterback ranks.

Head Coach Derek Mason is shaking things up in advance of this week's game vs. Massachusetts.

His third depth chart of the season includes plenty of surprises, including a key position change, a pair of confirmed starters at wideout, and a new face at the bottom of the quarterback pecking order. 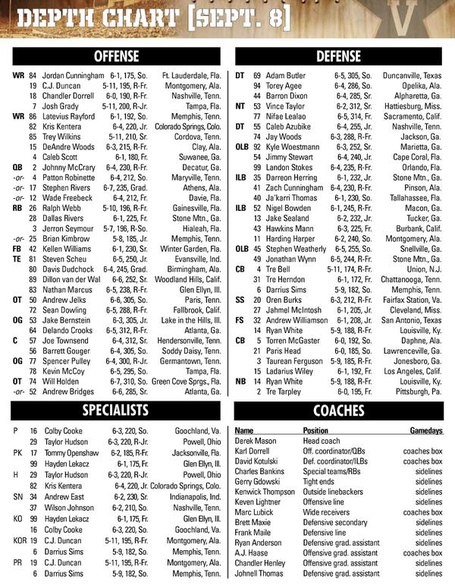 Redshirt freshman Johnny McCrary is listed as the team's number one quarterback, but he's also got the "-or-" designation that suggests that the starting spot is still up for grabs. McCrary had been listed there last week but failed to see a single snap while #3 QB Stephen Rivers played the entire game. The September 8 depth chart also marks the debut of true freshman Wade Freebeck, who is listed at the bottom of the queue. Freebeck was a four-star recruit who has worked hard to add weight and prepare himself for NCAA play. However, it's still too early to know if his passing game will translate to the field this early in his young career - or if this team's staff is willing to burn his redshirt in the midst of a rebuilding season.

The defense will welcome a familiar face back to the defensive line, according to this week's listings. Caleb Azubike manned the DE spot in his first two years on campus and developed into a fearsome pass rusher. He'll return to the line as a hybrid defensive tackle after spending the first two weeks of the season as an outside linebacker in Mason's 3-4 scheme. The junior recorded a pair of sacks in last week's loss to Ole Miss.

Mason's third depth chart is also the first in which he's named starters at wide receiver without tagging them with the "-or-" designation. Sophomores Jordan Cunningham and Latevius Rayford will start at wideout this week. The pair have looked solid in flashes, but the team's inability to complete passes and dependence on short plays to the tight end have kept them from having a significant impact for the 'Dores.

Finally, junior Brian Kimbrow has been bumped down to third/fourth string at tailback. The speedster has recorded just one carry for the team this season and that ended with a fumble. He didn't see the field at all against Ole Miss and this week's depth chart has confirmed just how big of a doghouse Mason and his staff have built for the tailback.