Derek Mason will get his first taste of an SEC rivalry this weekend when his Vanderbilt Commodores host Mississippi approximately three miles from campus at LP Field. Vandy and Ole Miss have put together one of the most competitive and compelling east/west pairings in the conference over the past decade thanks to two surging programs and some entertaining - and occasionally unexplainable - contests between the two teams. The 'Dores have put together a 6-4 record against the Rebels over the past 10 years, but last week's results have put the momentum firmly in the visiting team's favor for Saturday.

To get a better idea of what Vandy will be up against, we enlisted the help of an expert. JuCo All-American is an author at Red Cup Rebellion, SBNation's Ole Miss blog. You may know him from his post-game recaps, his player of the week awards, or as the Ole Miss writer who isn't Robert Goulet, a drunk kitten, or a pirate child. He was gracious enough to answer all my questions about the Rebels to help get us ready for Saturday's showdown. Here we go:

1. Bo Wallace seems to vacillate between being in-his-prime-gunslinging-Packers-QB-Brett-Favre and old-and-possibly-senile-Jets-QB-Brett Favre. What's the catalyst that determines which Bo Wallace we'll see in a given half? How is he able to flip the switch from ineffective to awesome so easily?

If only the Ole Miss coaches knew.

Bo Wallace has the potential to do great things. He can place the ball well at times, and his arm appears to be much stronger than it was last season, when he was recovering from a major shoulder injury. In the fourth quarter against Boise State, he was magnificent. He hit receivers downfield in stride. He noticed what the safeties were doing. He just dominated the game.

But then there were also the first three quarters. Bo threw one horrific interception where he stared at a covered receiver (tight end Evan Engram) on a hook route and then just threw to him anyway. He also threw two picks to safeties deep when he was being too aggressive. Many Ole Miss fans think he just wanted to show that his arm is better. That backfired of course.

Just like you did, in its first game, Ole Miss had three quarterbacks play. They were simply all named Bo Wallace. The Bo Wallace who played during the first two quarters was ugly. The Bo Wallace in the third was alright. In the fourth, he was electric. I imagine we’ll continue to see a mixture of the three. Ole Miss fans simply have to hope it’s more of the last Bo.

2. Robert Nkemdiche was the number one recruit in the country two years ago and he's been solid for the Rebels despite a quiet statline. Is he living up to the Rebels' expectations on the defensive line? What can Vandy fans expect to see from him - and his brother - on Saturday?

Generally, Robert is beloved by the Rebels. He didn’t have a statistically dominant freshman year, finishing with 33 tackles, 3 sacks, and 8.5 TFL. Toward the end of the season though, the light came on. He was spectacular against Georgia Tech in the Music City Bowl, and his dominance continued Thursday night against Boise.

Nkemdiche finished with just three tackles but had at least three quarterback hurries despite playing a team who was focused primarily on quick passes to the flats. He just stayed in the backfield for most of the night despite being double teamed. At times, Nkemdiche can fight through double teams with relative ease. Other times, he appears to be easily blocked. I don’t quite know what accounts to those things, but that’s the way it is.

He is likely to make several plays that make your jaw drop, as he does in most games. Ole Miss fans cherish that, but we’re also hopeful that he will begin to actually make the big plays instead of simply account for them and have other defensive players get the glory. It is in Ole Miss’ best interest as a program for Robert Nkemdiche to become a superstar.

3. Rank these Codys in order of how much Vandy fans should fear them: A. Cody Rhodes B. Cody Prewitt C. Cousin Cody from Step by Step D. Cody Canada, singer of the now sadly defunct back Cross Canadian Ragweed.

3b: How dangerous is a player like Prewitt against a program with instability at quarterback? 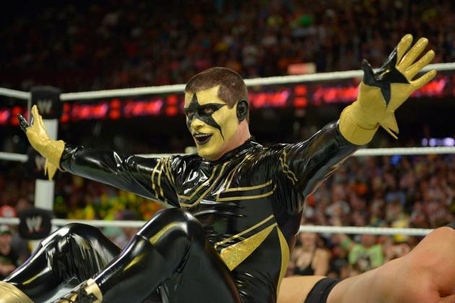 You certainly can’t rank anyone ahead of Stardust when it comes to fear-inspiration. After him though, there’s Cody Prewitt, Cody Core (6’3" 200 lb. receiver who had 110 yards and 2 TDs against Boise) and then Cody from SxS (who was an imbecile but an athletic imbecile) and Cody Canada (who I haven’t heard of until today).

Ole Miss fans were the last people to come around to Cody Prewitt (save for Mississippi State fans who think every Rebel is tied for the worst player of all time). Perhaps it’s because we saw the growing pains he went through in his freshman and sophomore seasons. By the time he was very good as a junior, we had already seen enough to dub him bad in coverage. Then he led the SEC in interceptions and was named an All-American despite having many more interception opportunities go through his hands. Prewitt had always been a hard hitter, but last season he was more than that.

Against Boise, he had two huge hits and a pick. We have a weekly poll on our site deeming someone the "Rebel of the Week." Prewitt got just 14% of the vote. People just expect him to do great things at this point. Looking back on the Ole Miss – Vandy game last season, Prewitt was out of position a good bit against Matthews, and Ole Miss fans assumed he was just bad in coverage. It turns out Matthews was just awesome. Who knew?

4. Ole Miss returned much of their talent on offense, but you'll be missing a pair of glue guys in the now-graduated Ja-Mes Logan and Jeff Scott. Who will step up to take their place, and can their replacements have the same kind of impact Logan and Scott had against Vandy last year?

Those two were very good players, and Donte Moncrief was a spectacular receiver. Against Boise, the receivers stepped up in the second half, and the ball was distributed among many, with three catching touchdowns. Cody Core, who I talked about earlier, was a big surprise as many Ole Miss fans had written the junior off as little more than an occasional role player. He was a member of Hugh Freeze’s first signing class, one that was quickly thrown together. He has played sparingly over the past two seasons, having been moved to safety at one point last season. Against Boise State however, he had one electric 71 yard catch and run where he left the Broncos behind. We had heard about his speed/size ratio being enviable, but it was nice to finally see it in action. I didn’t notice him doing a lot of running anywhere but straight, but he may be good at that as well. I have no idea.

Soon after the Vandy game, Jeff Scott got hurt, and his injury nagged him all season. Because of that, we saw a committee form which included sophomores Jaylen Walton and I’Tavius Mathers at running back. Both did well as the season wore on, though the entire offense sputtered in the final two games of the season. Against Boise State, the rushing offense was non-existent, with the Rebels boasting 13 first half rushing yards. Thirteen. Things got better, but it was still kind of yucky. Ole Miss fans have their sights set on redshirt freshman Jordan Wilkins to be the big back this offense has never had at its disposal. He may be up to the task, but it’s asking a lot of a freshman.

5. Finally, what's your prediction for Saturday's game?
5b. How many quarterbacks do you think Vandy will use?

There’s a bit of back and forth early before Ole Miss pulls away in the second half. Bo Wallace has an adequate day, but the Rebel running backs continue to struggle. Defensively, Ole Miss puts tremendous pressure on a quarterback who just isn’t up to the task.

b. Is there any reason to think it will be more than two? Surely they can’t put a freshman who threw two picks in three throws back out there against a much better defense. Right? Right?