Vanderbilt Depth Chart: Robinette to Return at QB Against Georgia?

Quarterback Patton Robinette is listed as the starter on Vanderbilt's depth chart, but the Commodores are still unsure if he'll be healthy enough to return against Georgia. Defensively, Caleb Azubike shifted back to outside linebacker to face the 'Dawgs.

Share All sharing options for: Vanderbilt Depth Chart: Robinette to Return at QB Against Georgia?

Patton Robinette is listed as the presumptive starter against Georgia on this week's depth chart - but it's still not clear if he'll play against the Bulldogs.

Robinette, who suffered a possible concussion against South Carolina and was maybe kinda-sorta injured earlier in the season, was placed first at the quarterback position for the 'Dores. He shares that spot with "-or-" designee Wade Freebeck. Freebeck started against Kentucky and completed only eight passes in a 7-17 loss. It appears that Robinette will get the call if he's healthy enough to practice by Thursday - a protocol the team employed last week. 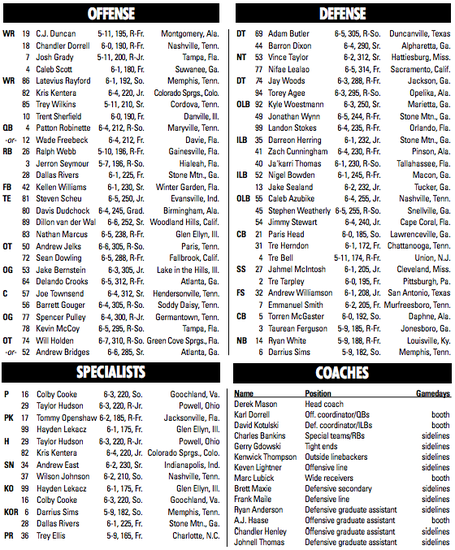 There were some other minor changes slated for the Vanderbilt depth chart. Caleb Azubike, who had found success as a pass-rushing defensive tackle, will move back to outside linebacker. That shift will take OLB Stephen Weatherly out of the starting lineup and push DT Jay Woods back into it. Kyle Woestmann is healthy enough to reclaim his starting spot at the other OLB slot. However, strong safety Oren Burks is not expected to play in Saturday's matchup.

There was less activity on the offensive side of the ball. Senior Andrew Bridges may have found his way back into the starting rotation at right tackle thanks to Vanderbilt's abjectly awful play in the trenches against Kentucky.