Vanderbilt will travel to Kentucky on Saturday in search of their first conference win under Derek Mason. Here's what the new Commodore coach needs to know about his SEC East rivals.

Share All sharing options for: Better Know an SEC Opponent: The Kentucky Wildcats

The School: The University of Kentucky

Ranking: The formulas have Kentucky rated 80th in the Real Time RPI (10 spots behind #70 Vanderbilt) and 77th in Warren Nolan's rankings (Vandy is, sigh, 110th).

Location: Lexington, Kentucky. Home of the world's largest basketball-specific arena and "also probably a football stadium or something."

All-time vs. Vanderbilt: 41-41-4. LET'S GET THIS TIEBREAKER DONE RIGHT BOYS. These two teams have been playing against each other since 1896, when football was better known as "Bert-bert."

Trivia: Vanderbilt currently has a winning head-to-head history against just one team that's currently in the SEC. Name them.

In the Last 10 Years vs. Vanderbilt: 6-4. Vanderbilt won three in a row under James Franklin by a total score of 100-14, so Derek Mason's got some catching up to do.

The Last Time We Saw These Guys: The Wildcats made the mistake of playing a Franklin team in November but got off to a fast start when JoJo Kemp scored on a two-yard touchdown run in the first quarter. Then, Vandy blocked the extra point, returned it for a safety, and Kentucky never scored again. Vanderbilt (led by Patton Robinette) 22, UK 6.

Is Vandy Favored?: Oh, geez, no. Kentucky by 15.5. South Carolina didn't even cover that spread.

Most Potent Offensive Threat: Garrett Johnson. Johnson, a true freshman wide receiver, gave QB Patrick Towles a home run threat in the Wildcats' game against Florida. The 5'11" speedster hauled in six passes for 154 yards and a pair of touchdowns against a Gator secondary that has more athleticism and experience than the Vandy backfield. If the Commodores can't show better coverage than they did against South Carolina last week then Lexington fans will be treated to the sight of Johnson running all by himself deep down the field.

Most Potent Defensive Threat: Regie Meant is an actual football player and not just a villain from Where in Time is Carmen San Diego?. He's also got a pair of sacks this season. He might not play a lot, but... Regie Meant.

Matchup to Watch: Patrick Towles vs. the Vandy secondary. Towles has returned to the UK lineup in a big way and averaged more than 300 yards passing in his three games this season. The redshirt sophomore threw for 369 of those in a 3OT loss against Florida, but that gaudy number also came with three interceptions and a low completion rate (53.3 percent). He'll have the chance to redeem himself against a Commodore secondary that is growing each week but still struggling to shut down opposing passers. Towles will have the green light to throw the ball, and it will be up to Vandy's defensive backs to prove that they won't be beaten deep this weekend.

Interesting Fact: "Kentucky" comes from an Iroquois word for "Land of Tomorrow." Just remember, every time you take a sip of Bluegrass-bred bourbon, you're drinking to the future! 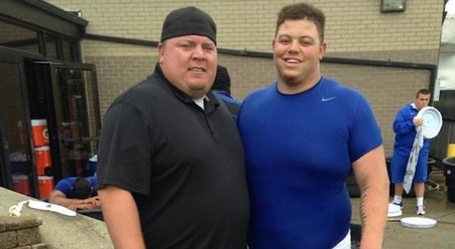 If Kentucky wins, we: ???. Kentucky is a better team in 2014 than they were in 2013 and Vanderbilt is clearly worse. Any notion of this being a probable win for the Commodores went out the window around the time that Ole Miss was burying the 'Dores, but to suggest that this game isn't winnable is defeatist and inaccurate. The Wildcats are going to put up a fight, but Vandy has a lot to build on after last week's loss. So who comes out ahead in a battle of teams reeling from moral victories? Tough call.