Coach Derek Mason released his depth chart for Saturday's game against Kentucky, and it features only two quarterbacks - Patton Robinette and Wade Freebeck. See who's starting below.

Vanderbilt cut their quarterback listing to a season low on Tuesday when they published their depth chart for Saturday's game at Kentucky. Patton Robinette will be the team's starter and true freshman Wade Freebeck, who played well against South Carolina, is his backup. 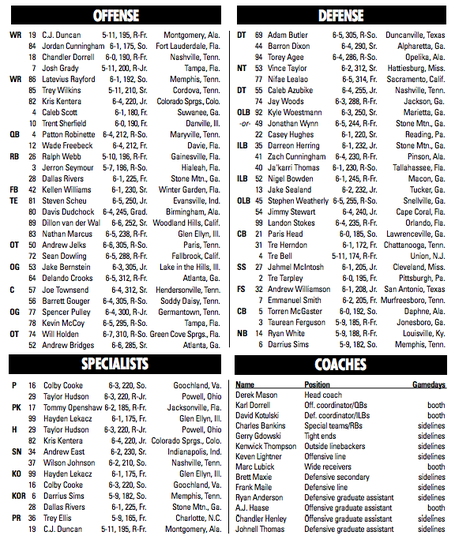 There were other changes as well. C.J. Duncan is now a starter at wide receiver. The man he replaced, Jordan Cunningham, missed last week's game against Carolina after having a minimal impact versus UMass. Outside linebacker Kyle Woestmann may be slated to return from injury against the Wildcats, but his status is uncertain due to the "-or-" designation between him and last week's starter Jonathan Wynn. Additionally, oft-picked on cornerback Tre Bell has been slid down to third team cornerback. Paris Head will start in his place and true freshman Tre Herndon seems likely to see some playing time in the secondary as well.

Missing from the sheet entirely is tailback Brian Kimbrow, who was suspended indefinitely for "conduct detrimental to the team." Kimbrow had been relegated to the bottom of the depth chart after fumbling in his first carry of the year. The junior is a talented athlete with tremendous speed, but his inability to contribute as a pass blocker or as a reliable receiver out of the backfield kept him from the field the past two years. His future with the team is currently up in the air.

Vanderbilt is currently a +15.5 point underdog to the Wildcats. We'll see if the presence of Robinette at quarterback helps shift that line in Vandy's favor this week.