Vandy goes on its first official roadtrip of the year this weekend, and as rabid as we are as fans, I'm also realistic enough to know that a lot of us will be watching this from the comfort of home. With that in mind, this week we shift from tailgate food to gameday food. What's the difference? Nobody really knows.

Share All sharing options for: Anchors Aweight: Duck Nachos and The Paris Manhattan

Today we will take a couple of old favorites, nachos and The Manhattan, out for a makeover. 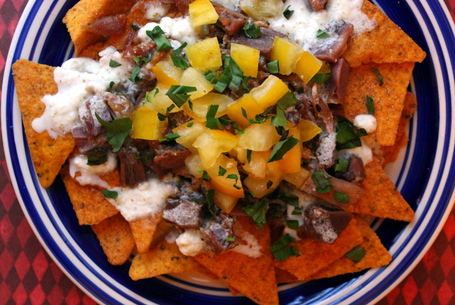 Tortilla chips + cheese + microwave = nachos. At least that was the starting point for me as a kid, and still a pretty reliable friend when money is tight and there is beer to be absorbed.

As I got older, I got a little more adventurous, adding jalapenos, salsa, sour cream, ground meat - basically, whatever I could find that seemed to fit the theme. The pinnacle of all this came in college, when at some point we built a dish we lovingly referred to as "Turbo Death Nachos." I don't recall what exactly went into this amalgam, but I do recall feelings of regret and no desire to record the ingredients for posterity.

Those were the days when my stomach was made of iron and my palate was as subtle as an Adam Sandler film. Now, I approach my food knowing that I have to get more out of less (damn slow metabolism). For me, that is usually an exercise is decontruction.

Without going too deep into a discourse on culinary philosophy, a good dish is going to hit most of your taste senses - sweet, sour, bitter, salty, and umami. Looking at basic nachos, we get the salty and umami aplenty, and usually a small dose of sweet from the corn chips. We add peppers, and we can get the bitter (and some heat), and sour cream, well that should be obvious. So now we have pretty much a complete dish. How do we make it better? Crank all of the components up to 11, that's how.

In some ways, it is just that simple; make everything more intense, and you'll have a better dish. The trick is keeping everything balanced and making everything work together so you get a well-rounded flavor profile. If that sounds like a lot of work for a plate of nachos, well, it is. But that's what people like me are here for, to obsess over things until we can come up with something new, like Duck Nachos.

This dish is loosely based on something a friend of mine described to me from his travels. Truthfully, I don't remember where he had it or anything other than they used duck confit to make nachos, and that sounded like a crazy enough concept for me to try to make it work.

All of the basic components of nachos are here, but we've either pushed them up a little or tweaked their use. Sweet potato tortilla chips (found in the hippie organic section) up the sweetness. Duck confit pushes the umami and the salty. Goat cheese comes in to both add the sour and ease off the umami that would come from a traditional cheese like Monterrey Jack. And the addition of green peppercorns adds a different type of heat, and also that hint of bitter. What we end up is a gourmet take on an old standard, and one that packs a lot of punch. I made a plate of these, thinking I'd put the whole thing away like normal nachos. I was done after half, quite pleased but unable to even think about another bite. This is definitely a dish for sharing.

A note on ingredients before we get started. One, if you don't have duck confit, and don't feel like going through the whole process, use cooked chicken thighs. The effect won't be quite the same, but the results will still be good. You could also use breasts, but the flavor just isn't the same. Dark meat has a lot more going for it, and is cheaper to boot. If you haven't gotten the memo on boneless-skinless thighs, take the time to try them. Every chicken dish you have will be better, I promise.

Two, green peppercorns aren't terribly hard to find if you have a local Asian grocery, and you probably do. They are the black peppercorns you are used to, just brined instead of dried. They are insanely potent, like their dried brethren, but with a softer texture. If you can't find them, use freshly ground black pepper instead. You may have to adjust slightly, but everything in a recipe should only be a guideline anyhow. If the end result tastes good, then you've done it right. If not, that is why God gave us hot sauce. 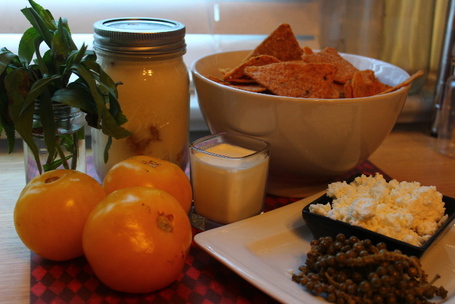 Start by making your cheese sauce. Combine goat cheese, peppercorns, and about half the cream in a blender. Pulse a few times, just enough to break up the peppercorns and combine the ingredients. Add remaining cream gradually, pulsing the blender, until the mixture is smooth and pourable. You want the consistency to be similar to that of a cheese sauce ("queso cheese" or "cheese cheese" in English) in a Mexican restaurant. If you overblend, you'll get whipped cream, which is good but not for nachos. Taste and add a little salt, but not as much as you think. The duck is plenty salty.

Next, warm up your meat. I happened to have a jar of confit stuck in my fridge from another project, but if you don't have a fridge full of weird stuff, use chicken as noted above. Warm a little duck fat/shortening in a sauce pan. Chop your poultry into small pieces -- the flavor is pretty intense -- and add to the hot fat. Leave for 2-3 minutes, then move off of the heat. Do not drain unless you are worried about cholesterol, in which case you shouldn't be eating nachos.

Meanwhile, core, seed and dice your tomatoes. If you feel comfortable with this process, chop your tarragon and move on to the next paragraph. If you always curse dicing tomatoes, read on. There are two mistakes people make when cutting tomatoes, one global, and one local. Globally, your knife isn't sharp enough. Actually, none of your knives are sharp enough. You never sharpen them, you only hone them occasionally and even for that you just kind of make scraping noises on your steel. Do yourself a favor and learn how to sharpen your knives. Or at least do what I did and buy an electric sharpener. It isn't as effective, but it is better than what you are using now. Locally, never chop tomatoes. Always slice. I learned this lesson in an odd way. I was watching a demo for a knife that "never dulls!" and "can cut a shoe!" and "does your taxes!" and wondering what the catch was. The guy pulled out an "ordinary" knife and mutilated a tomato, then pulled out the knife he was peddling, fresh from cutting a Buick in half, and made beautiful slices. What was going on? Well, with his knife, he drew the tip of the knife against the board, letting the knife ease into the tomato and gently slicing. With the competition's knife, he bore down like he was doing chest compressions, and the tomato turned to goo. The lesson? His knives are probably still shit, but his technique was pretty good. So slice, even when you dice, and your tomatoes will be lovely. Now, chop your tarragon however you want, because it isn't going to fall apart under pressure. 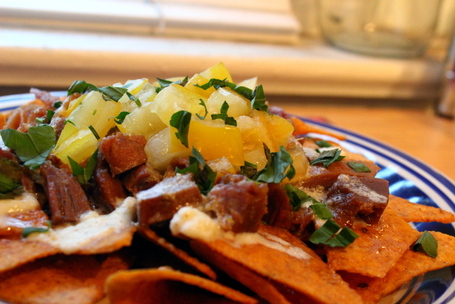 Time to assemble. This should be easy, but I'll walk you through it. Chips on plate, followed by meat. If you get some of that lovely duck fat dripping all over your chips, you win. Pour your cheese sauce over top, followed by tomatoes (sliced not destroyed). Finally, a liberal garnish of tarragon. And I do mean liberal. I didn't talk about this, but the tarragon is the Dude's rug of this dish, really pulling everything together. I'll save the whys and hows for another day, because I'm thirsty now.

I'll start by giving credit where it is due. This recipe is a simplification of one from a great little book called Drinkology Eats. It probably has a higher recipe:word count ratio than one of my articles, but it does have some great ideas for party food, cocktails, and general debauchery. Honestly, the authors are probably better qualified to write this column than me, but they don't work as cheap.

The Paris Manhattan is basically a Manhattan made with Lillet, a French aperitif wine not unlike Vermouth. It does have a hint of citrus, and it is more herbaceous than any vermouth. Wikipedia tells me it has quinine as well, so if malaria is still rampant in your province, this is the tipple for you. In any case, it makes a damn fine cocktail, well matched to lower end whiskeys that could stand some added depth. I've also tried the serving suggestion on the back of the Lillet bottle, mixing club soda with the wine and a squeeze from one of my omnipresent limes. You'd have to drink a lot of them to get right and proper, but it is a delicious and refreshing drink nonetheless.

Also of note, apparently there is another drink of the same name out there, this one containing St Germain. I'm sure the floral notes are lovely and more pronounced than our drink for today, but I'm staking a claim for this to be the one true Paris Manhattan owing to my purchasing the book long before I ever heard of St Germain.

In keeping with the original recipe, I'm using Cherry Bitters in this drink. I really like most of what I've had from Fee Brothers, but their cherry isn't the best. It works fine in this recipe, but for other drinks it can taste a bit medicinal. Their Aztec Chocolate Bitters, on the other hand, are magic. A few dashes in the most pedestrian bourbon will make it utterly quaffable, and it is a brilliant substitution in this cocktail as well. I'd have renamed the whole thing and listed it instead had I not already taken the picture and drank all of my remaining Lillet. 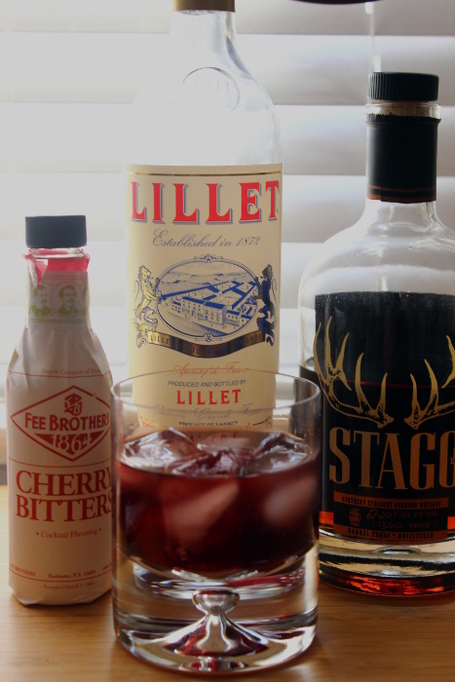