The Commodore Review: How Vanderbilt Really Looked in Their 34-48 Loss to #15 South Carolina

Vanderbilt lost by two touchdowns, but this team gained a lot more despite falling to South Carolina. Can the Commodore offense continue to build and grow in 2014?

Share All sharing options for: The Commodore Review: How Vanderbilt Really Looked in Their 34-48 Loss to #15 South Carolina

Vanderbilt lost a conference game at home by two touchdowns on Saturday. So why are Commodore fans suddenly feeling good about Derek Mason's team and their 1-3 start?

It all has to do with progress.

The Commodores showed signs of growth in their 34-48 loss to South Carolina. They never gave up despite several opportunities to revert back to the team that got mollywopped 41-3 against Ole Miss. Vandy soldiered through the losses of their starting quarterback and left tackle to deliver the most complete offensive showing Mason has directed in Nashville. Patton Robinette and Wade Freebeck took advantage of some complementary playcalling to lead this team to nearly 400 yards of total offense.

That doesn't sound like much on its own, but consider this; in Vanderbilt's first SEC game, they managed just 167 yards with Stephen Rivers behind center. Robinette and Freebeck nearly quadrupled this team's passing output from that miserable contest two weeks ago. The Commodores battled until the final bell and showed signs of growth - particularly from the true freshman Freebeck - even as USC sprouted a late 21-point lead. By my count, there were no fewer than four times when this team could have turtled up and waited for next week:

Instead, this team never crumbled and took every mistake as a teachable moment. That development wasn't as apparent on defense thanks to the mismatch of a polished SC receiving corps and a young Vandy secondary. Even so, the Commodores can survive some struggles while Mason installs his 3-4 defense and a gaggle of inexperienced defensive backs learn on the fly.

Saturday's result was a loss, but it was an inspiring one. Like Andrew and VandyImport have already noted, a performance like that is something that both the team and the fans can build on. Let's hope that Mason and his staff and move these guys to the next step forward this weekend against Kentucky.

Wade Freebeck grows up. So THAT'S why Derek Mason was eager to burn this kid's redshirt. Vanderbilt could have folded when Robinette headed to the locker room in the first quarter, but this team came together to fight under Freebeck. The freshman made some rookie mistakes - staring down a receiver for a telegraphed pick-six was the most notable - but he showed off the accurate touch that put him on this team's radar for 2014.

Look at that play above. Freebeck stands in the pocket, steps up in the face of a big hit, and then delivers a perfect 35-yard strike to Kris Kentera. The game may have been in South Carolina's hands at that point, but the true freshman still proved that he can move the ball against an SEC opponent's starting defense. He still has plenty to learn - and he's still behind a healthy Robinette on the depth chart - but his play on Saturday was strong enough to make Vanderbilt fans feel better about a quarterback position that was a trainwreck two weeks into this season.

Ralph Webb and Jerron Seymour provide key offensive support. The power platoon turned up to gain 129 yards on 25 carries on Saturday night. More importantly, they created enough of an offensive threat to keep Carolina on their toes and open up opportunities for Robinette and Freebeck to find receivers downfield. The two tailbacks give Vanderbilt a versatile ground game, and they'll only get better as Webb grows and Seymour continues to recover from injury.

/falls over while returning kick.

Steven Scheu shows off his chops. The narrative going in to the 2014 season was that Scheu had the physical makings of an NFL tight end but hadn't put together the production to back it up. On Saturday, the junior hauled in three catches for 83 yards to eliminate some concerns about the latter. The big target has shown a penchant for finding seams in opposing defensive schemes and presenting a target for Vandy's developing quarterbacks. Scheu now leads his team in all major receiving categories and has gained more yards in 2014 than he had in 2012 and 2013 combined. With Vanderbilt in dire need of offensive weapons, the junior has stepped up in a big way.

Patton Robinette's injury. Robinette's commitment to driving this team to a 14-0 lead has to be commended. Unfortunately his hard-charging play pushed an already-bruised body past its breaking point. Robinette stayed in the game to hit C.J. Duncan with a third-down touchdown pass, but left soon after due to concussion-like syndromes. He may or may not return this week against Kentucky, but Derek Mason can't be happy about another week of speculation about his sophomore quarterback's health.

That passing defense. South Carolina was a series of overthrows and dropped passes away from scoring 60+ points against Derek Mason's secondary. While Paris Head made a difference in his first meaningful playing time of the season, the Gamecocks showed that Tre Bell is still vulnerable as a young and developing cornerback. Dylan Thompson had an assortment of targets downfield each time dropped back to pass, and when it became clear that he wasn't connecting on his deep passes he switched to an effective midrange game that kept South Carolina rolling.

JUMP ON THE DAMN BALL. South Carolina lost three fumbles and recovered two of them despite being outgunned around the ball in both situations. The team botched another potential fumble recovery in the second half that ended up being ruled an incomplete pass. Vandy created several opportunities to turn things around after Carolina had grasped the momentum, but their inability to capitalize on those chances ultimately doomed their comeback effort.

Vanderbilt's official recount of the score:

They don't believe in you, Kris Kentera! 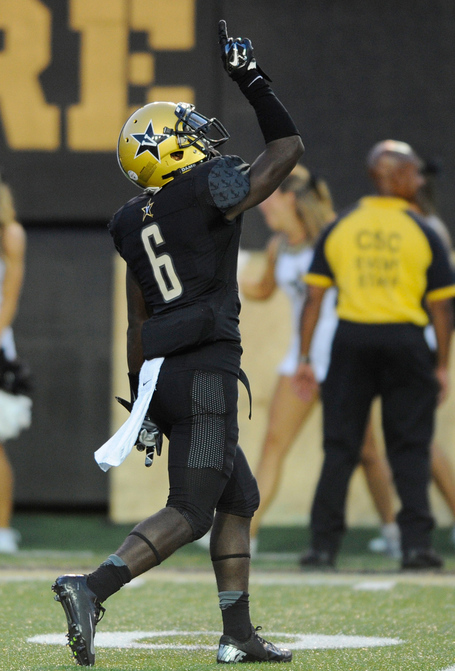 The PiBB Ice Player of the Week: Darrius Sims

There were several strong performances from the Commodores on Saturday - Webb, Freebeck, Scheu, Adam Butler, and Nigel Bowden all deserve consideration. However, it couldn't be anyone but the guy who took two kickoffs to the house to ignite Vanderbilt's newfound feistiness on the football field. Sims got Vandy fans excited with his potential as a true freshman. Now he's cashing in on that talent to lift this team when they needed a spark the most.