Derek Mason saw his hot hand at quarterback, and he's going to stick with him. Sophomore Patton Robinette will start for Vanderbilt this weekend against South Carolina.

After a busy week three (and Vanderbilt's first win under Derek Mason), the Commodores' depth chart has settled itself for week four. Patton Robinette, who led Vandy to their first three offensive touchdowns of the year, will return to the spot he occupied in week one as this team's starting quarterback. Wade Freebeck, the true freshman who started against UMass before being pulled for Robinette, will be the team's primary backup. 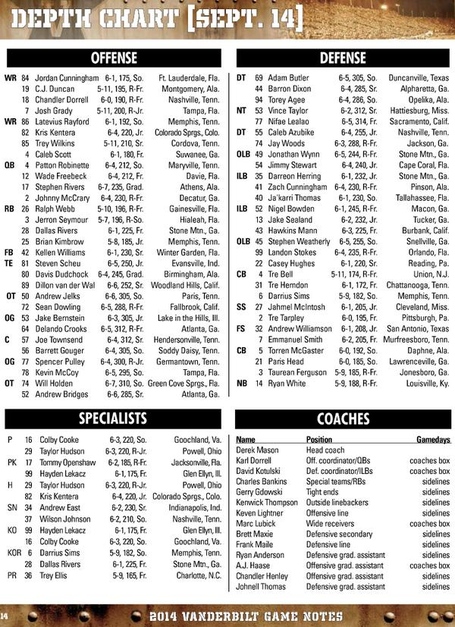 Mason ditched the "-or-" designation to make Robinette the official starter on Tuesday. Other than that, the team's offense remains mostly the same from last week. Will Holden is now officially the team's starter at right tackle, but the sophomore had been easing his way into that role throughout the season. Jordan Cunningham will remain a starter at wideout despite some pressure after C.J. Duncan's four-catch, 72-yard performance against the Minutemen. Ralph Webb and Jerron Seymour will be the team's 1-2 punch at running back.

Things were a bit less clear on defense. Vince Taylor appears to be ready to return to the team after missing last week's contest thanks to a pregame injury, but safety Oren Burks isn't listed on the Vanderbilt depth chart. The 'Dores haven't revealed the reason behind his absence, but losing Burks would be a big blow for a young team that has relied on the redshirt freshman's strong play up the middle. Jahmel McIntosh, a solid veteran who has the talent to handle starting duties, will take over at the position.

The defense is also missing Kyle Woestmann, who will be replaced by Jonathan Wynn at outside linebacker. Wynn had six tackles last weekend, including a sack. Woestmann left the UMass game early due to injury and did not return.