Alright, let's not get that enthusiastic just yet. - Christopher Hanewinckel-USA TODAY Sports 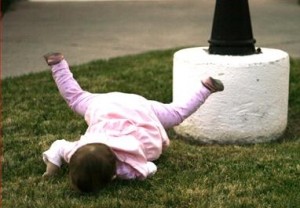 You gotta learn to walk before you can run... or eke out a win vs. an iffy MAC opponent

I’m fresh out of animal metaphors (kinda shot my wad by using ‘hedgehog cabaret’ this early in the season… donkey recital…? … damnit), but nobody in their right mind would describe that victory as pretty. We once again underperformed against an inferior opponent. We needed late game heroics and superb special teams play to scratch out a result against a bad MAC squad. We relied on the errant foot of an apparent 12-year-old kicker to avoid disaster. The consequential play was so morbidly tragic that Adam Butler felt compelled to console a non-injured opponent. But we won. If we don’t think that’s an improvement, we’re crazy. More to the point, if we don’t think the fight that this team demonstrated despite the way this season has started is an incredibly positive sign, we’ve jumped the shark. After perusing the comments section this weekend, however, I’m a bit concerned about those latter possibilities.

It’s natural to kvetch about the Wile-E.-Coyote-qualities of our offense (I’m counting that as an animal metaphor) or the gaping holes in our secondary we’ve witnessed the last three weeks. It’s also natural, cathartic, and perhaps justified to place the entirety of blame for those things on the coaching staff. But we’re too educated (and emotionally hardened, nay, emotionally tortured) of a fanbase to fall victim to those pedestrian trappings. With that in mind, I’m going to change my tone a bit from preaching patience to imploring evidence-based opinion holding. The particulars of how we’re improving can wait for another week, preferably after we’ve beaten a decent opponent. May have to earmark that one for 2016. Instead, I’d prefer to address the very understandable, but perchance not entirely warranted, angst we’re expressing towards this experience of "being bad at football right now". Strap in, this is about to get reeeeeally unpopular. Like, Lane Kiffin returning to the sideline at Neyland Stadium this October unpopular (who isn’t excited about that?1?!?).

Let’s start this off with a bang.

**A Statement Guaranteed to Lose the Crowd**:

I think we’re too easily and quickly marginalizing Karl Dorrell. … ::crickets:: … Hey, where’s everybody going? Yes, we still have major issues on that side of the ball, and many of them certainly involve our offensive coordinator. Yes, he was glacially slow to modify the playbook and the pro style system seemed incompatible with our personnel. Yes, we made a mess of the QB situation. Yes, at first glance it looks like we’re now cooking s’mores over Freebeck’s redshirt. Yes, his coaching résumé isn’t spotless. Addressing those points in order:

Offensive woes – I won’t belabor the youth and lack-of-Jordan-Matthews talking points, but we’re kidding ourselves if we think those issues don’t matter or that he has significant control over them. I agree with what you’re probably thinking, that quality coaching involves taking whatever players you’re given and putting them positions to be successful. That’s absolutely true, but after two woefully inept attempts at calling an exclusively vertical passing and inside running game, he’s evolving. The offense looked far better this week, and playing an inferior opponent doesn’t account for the severity of the turnaround. As evidenced by the lack of blood streaming from my eyeballs during our possessions, it was better. Hell, I’ll go so far as to call it "watchable".

Playbook modifications – We wanted more variety, particularly with things that this offense is accustomed to and have worked in the past (wildcat, sweeps, misdirection, bootlegs) and he delivered, albeit fairly tardy. We wanted to go more run-heavy and use that to draw in their secondary to facilitate the pass, and he delivered (40 runs, 23 passes). As for the pro system, once Patton got the ball moving with more college-style sets we starting dropping in bits of our original vertical passing game. During the 4th quarter alone that yielded three separate plays where our WRs or TEs had 3-5 yards of separation behind the defense. Patton simply underthew all three of them by about 10 yards; fortunately Duncan is a freak of an athlete and tore the ball away from their best defensive player. That’s been the one consistent knock on Robinette: arm strength. You can put some of that on the QB coach and OC, I guess, but it’s difficult to teach a guy to have a cannon. Despite our general lack of size and speed outside, elements of the pro-style concept can be successful for us when combined with more creative playcalling, and Dorrell seems to be embracing that… slowly. Yet we’re still calling for his head.

(Author’s Note: It’s not lost on me that I have now – in three consecutive weeks – vouched for, then denigrated, and now supported some aspect of the pro style offense we instituted. Hypocrisy, thy name is VenerableSlinky. ::waves hands in circles:: You feel sleepy and remember nothing of my previous comments, carry on believing what I’m now selling.) 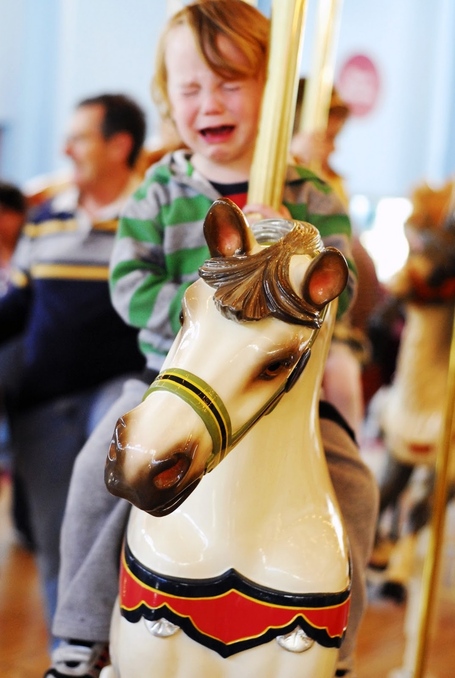 We just want to get off this ride before the vomit happens. Credit: Angie Weldon

Think back to two weeks ago. Following the Great Three Quarterback Experiment of 2K14 we were just hoping to see one guy get the nod and to have the staff stick with him for four quarters against Ole Miss. That’s exactly what they did, but – other than the Chris Weber references we were allowed to make after the phantom timeout fiasco – it didn’t bear much fruit, to say the least. We were then clamoring for Robinette to get another chance. As discussed by another poster, during postgame interviews Mason and Patton confirmed that the gameplan was to use both Freebeck and Robinette during this game, but Patton simply took the bull by the horns and Dorrell stuck with what was (finally) working. So, they sortof did what we were hoping in that regard as well.

Like my blood pressure during that final defense stand (eh, gave up 95 yards in 60 seconds… defensive informal protest?), this constant QB rotation is far from ideal. And I agree with many of you that burning a kid’s shirt needs to be a conversation between the coaches, the player, and his family. But early playing time is something both coaching regimes have recently sold to recruits and most kids would choose an opportunity to be a 4-year starter over the possibility of never getting the chance to step on the field. I would hope we didn’t waste a year of Freebeck’s eligibility for 2 passes, so there’s a good chance that we see more of him this year. Robinette is clearly the starter against South Carolina, but this is the one time I will ever say this: a 2-quarterback system may be a good idea for us this year. Despite having just shed most of my football credibility and many pieces of my soul by uttering that statement, I think it may be our best chance of moving the ball on a consistent basis.

We’re blessed with the gift of hindsight when evaluating these decisions. But at least from the stands under gameday time-pressure, stress, and a need to get anything out of the offense, it’s been difficult to fault the coaches for not having complete faith in any of these guys under center. Patton’s performance has likely changed that a good bit, but I don’t think we’ve seen the last of this QB merry go ‘round. So keep your wits close and your flask closer.

Dorrell’s coaching pedigree – An oft referenced factoid is that he’s failed upwards throughout his career (speaking of Lane Kiffin…). But he hasn’t. His overall record at UCLA was 35-27. Not spectacular, but he did have them ranked as high as #7 late one season, #11 during another, and defeated #2-ranked-USC at one point. His worst season was 6-7 and his best was 10-2. Sure, 2013 as the QB coach of the Texans was pretty craptastic as Matt Schaub got injured and finished with a QB rating of 73. But a year earlier with Dorrell in the same position they went 12-4 and Schaub went to the Pro Bowl. He’s done reasonably well throughout most his career and has had flashes of truly great success. Are there more innovative offensive coordinators out there? Yup. But there are also people like me out there with nonsensical animal analogies (and Ted Cain).

A quick note: someone else explained this earlier, but I feel it bears repeating. Re: the failed first half two-point conversion as evidence that this staff doesn’t know what they’re doing. Mason addressed it in the postgame. The swinging gate alignment on an extra point is designed to be an on-field judgment call based on the defense’s response. On Saturday the staff told the guys to just kick it every time no matter how the defense lined up, but someone on the field missed that memo. Again, communication issues are certainly on the staff, but that’s fixable and not indicative of a dearth of football knowledge. These coaches have been in the business for an average of about 20 years; they’re too smart to chase points in the 2nd quarter, at least give them that much credit.

I am absolutely not defending every action that the staff – Dorrell in particular – has taken thus far, because whoa nelly have there been some issues. I am, however, trying to offer some perspective on what they’ve been faced with and the things working against them. Seriously, how do we lose 4 reviews involving scoring plays in 3 weeks? I don’t care if 3 of them were the correct call, that’s still horrifyingly bad luck, especially when the Rivers and Frohnapfel fumbles might as well have been the exact same play.

That victory was the first tiny step towards this ugly duckling turning into a 320-pound brutal swan. It won’t be a steady molting process (there may not be enough craft beer in the Southeast to get me to halftime of the Georgia game), but let’s all try to take an aerial view of this program. 18-year-olds aren’t known for consistency and attention to detail, let’s cut them some slack week-to-week. Same goes for the coaches. They’re not doing a perfect job, but they’ve shown signs of improvement and are better than we’re giving them credit for. 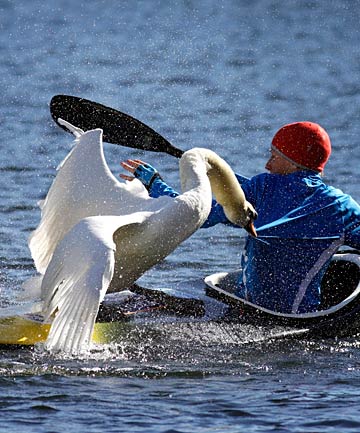 I fully endorse our lack of contentment with squeaking by inferior competition, and the analysis/wit on this site is head and shoulders above any other. But let’s never get so jaded by success that we don’t take any enjoyment out of wins, no matter how many skid marks they leave. The players and the staff need our support, and that’s only going to expedite the timetable of being legitimately back in the SEC East scrum. We should also never give anyone a free pass, because we now demand excellence, but let’s keep our reproach within the limits of data and reason.

As for this weekend: one heartfelt Spurrier visor toss, that’s all I’m asking.