The Commodore Review: How Vanderbilt Really Looked in Their 34-31 Win Over UMass

It wasn't pretty, but it was a win. Vanderbilt needed all 60 minutes to defeat UMass at home, but they got some key strides forward from an embattled offense. Can first-year head coach Derek Mason learn from this team's first victory in 2014?

Share All sharing options for: The Commodore Review: How Vanderbilt Really Looked in Their 34-31 Win Over UMass

Any win you can walk away from, right?

Vanderbilt's win over UMass rated somewhere near Don Mossi when it comes to passing the eye test, but it's undeniable that this team made some key improvements after a 78-10 start to the season. For one, the offense scored a touchdown - three, in fact - and produced a reliable option at quarterback. The defense was carved up early, but they responded when this team could no longer afford to give up points and held the Minutemen scoreless over the final 25 minutes of the game.

It was a much-needed step in the right direction, but it was also a three-point home win over a team that hasn't cracked the top 125 in three years of FBS football. As much as Vanderbilt needed a win on Saturday, the Commodores can't afford to celebrate for more than a few seconds. Derek Mason's team rolled in to last week's game as a 17-point favorite. With nine minutes left to play, they trailed by 11.

For all the progress that this team made, they still had to rely on a young Minuteman squad to give this game away. Special teams turned out to be UMass's undoing. A blown assignment allowed Stephen Weatherly to block a fourth-quarter punt without even extending his arms.

Approximately nine minutes later, with the game on the line, kicker Blake Lucas skimmed a 22-yard field goal off Adam Butler's forearm and 15 feet left of the goalpost to clinch this game. While the 'Dores don't get to create either opportunity without a big defensive effort, it's clear that UMass's inability to get out of their own way was costly on Saturday.

Vanderbilt can't afford to be the team that spotted 2-25 UMass (2012-2014) a 14-0 lead when South Carolina comes to town. They can't be the team that allowed the Minutemen to drive 55 yards in one minute with the game on the line either. But, if they can be the team that utilizes a talented running game and a passing offense that won't put undue strain on its developing quarterbacks then they can compete with the Gamecocks. That may be asking a lot based on what we saw in the first two weeks of this season, but Saturday's win shouldn't just be a learning experience for these players. Derek Mason had plenty of teachable moments of his own that afternoon.

Ralph Webb answers the call. We've been complaining about Webb's usage through the first two weeks of the season. On Saturday, Derek Mason responded by giving the freshman 26 carries - and Webb came through with the first 100-yard rushing game of his college career. The redshirt freshman looks like he'll be this team's feature back for the next three-to-four years. Having him lead a platoon that features Jerron Seymour, Dallas Rivers, and the eventually-exhumed Brian Kimbrow will give this team a major offensive weapon well into the future.

Patton Robinette steps up. SEC Network announcers kicked up a dust storm three weeks ago when Robinette was pulled against Temple when they worried out loud about the sophomore's confidence and whether he could recover from the slight of ceding snaps to Stephen Rivers. It turns out, he could. Robinette didn't make many big plays with his arm - in fact, his biggest gain through the air was an interception that C.J. Duncan ripped from Randall Jette's hands - but he displayed the poise and mid-range passing game that this team needed to be successful on Saturday. The General finished the game with 182 total yards, 15/21 passing, two touchdowns, and zero turnovers. That kind of efficiency can supplement the young passer's developing deep game if he can keep that pace up against SEC opponents.

Stephen Weatherly and Caleb Azubike. Azubike is better as a lineman than a pass-rushing linebacker, but a big part of why the Commodores could shift him back to the trenches is the play of sophomore OLB Weatherly. Weatherly showed why he's a cornerstone of this team's future on Saturday. He scored a pair of touchdowns (a called-back fumble return and a punt block/scoop/score) that energized and rallied his team. Meanwhile, Azubike played the bulk of his snaps at defensive tackle for the second straight game and responded with a pair of sacks (for -16 yards) ...for the second straight game. Their play helped lessen the impact of losing DT Vince Taylor to a pregame injury.

CJ Duncan. Four catches, 72 yards, and this. Good lord, this: 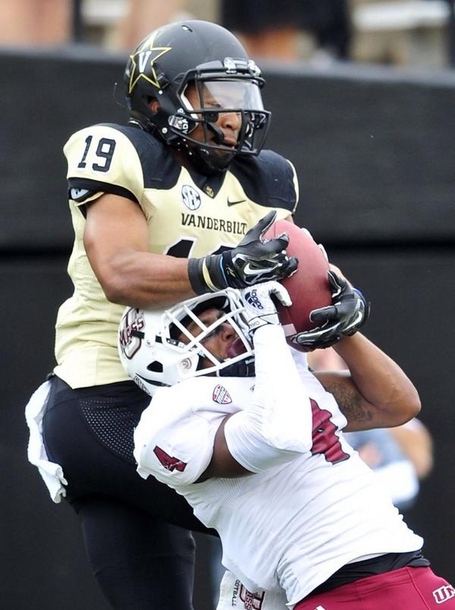 That pass defense. Blake Frohnapfel only threw for 205 yards, but he was aided by several penalties in the secondary that helped extend drives. Additionally, Frohnapfel was able to keep UMass rolling by gaining 7+ yards on six different third down situations, negating many of the early stops this team was able to glean behind a solid pass rush. If the Minutemen can do that on a regular basis, just think what Dylan Thompson and a high-powered South Carolina offense will be able to do this weekend if the Commodores can't improve.

Stupidly steadfast playcalling. Everyone knew that UMass was liable to run a fake punt when they faced fourth-and-five from their own 47-yard line in the first quarter. The Commodores paid that no mind, opting to send the wolves after Minuteman punter Brian McDonald. That left Rodney Mills wide open on the right side of the field, and McDonald had just enough time to hit him with a pass. Two laughably bad tackling attempts later, UMass led 13-0. It was a bad lapse that shot this team's morale into the basement early.

On the plus side, Vandy's aggression led to Stephen Weatherly's blocked punt and touchdown in the fourth quarter. At least the two canceled out.

Vandy's ill-fated two-point conversion in the second quarter was going to earn a spot on this list as well, but Mason noted that this was a player audible at the line of scrimmage. That doesn't mean it wasn't terrible, but at least it makes marginally more sense.

Wade Freebeck. Not his play - he did as well as expected as a player in his second month of college football. This is about the coaching staff's decision to burn his redshirt for one quarter of NCAA play against Massachusetts. If these coaches knew Robinette was a viable option at QB, why play Freebeck at all? Is there some sort of bizarre bet floating around the rich pricks of Nashville regarding how many quarterbacks this team can play before October?

The PiBB Ice Player of the Week: C.J. Duncan.

Webb and Robinette were great. So was Stephen Weatherly. But Duncan's extraordinary play - against a cornerback who is bound for the NFL - singlehandedly prevented a Vanderbilt loss.