Kevin Stallings has coached some Vanderbilt legends in his tenure at Memorial Gym. Today, you get the chance to bring them all together to create the best 5-on-5 team you can - but stipulations apply...

Share All sharing options for: Fantasy Friday: Creating the Best Vanderbilt Basketball Team - On a Budget

You're about to go to war on the basketball court. You can pick six players from some of Kevin Stallings's best teams to represent you - but you've got to do it on a budget. With whom do you ride?

That's the story for our first-ever Fantasy Friday. You've got the opportunity to create the Tune Squad of Memorial Gym, but you'll have to do it on a budget - and you can only pick from guys who played for Coach Stallings in Nashville.

The premise of the game is simple. You have $21 to spend on a pickup basketball team that you're taking to the most prestigious 5-on-5 tournament in the world. There are 30 former Commodores to choose from - six at each position. Each player comes from the Stallings era, which means that as cool as it would have been to trot Clyde Lee or Jan van Breda Kolff out there, they've been excused from these proceedings. Any player who played for the 'Dores after the 2000-2001 season was eligible for this exercise. From there, I picked the top six ballers from each position to create a basic list of players and prices; feel free to argue with my haphazard selection process in the comments. 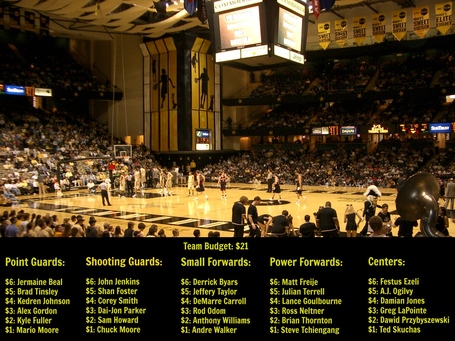 Logic suggests you'd want one player at each traditional spot along with your sixth man, but nothing is stopping you from throwing out a lineup where Dawid Przybyszewski and Ted Skuchas are holding down the backcourt while Damian Jones, A.J. Ogilvy, and Festus Ezeli put in work up front. You probably won't win many games, but you'll have rebounds and blocks set for life.

The players have been arbitrarily ranked and assigned a free agent cost based on those rankings. Some of the small forwards are guys who played up front in small ball lineups. Some of the point guards are hybrid shooting guards. Not every player fits into their category neatly and there are almost certainly some players that I left out; this is not a comprehensive ranking of every athlete in the Stallings era, but this is what we're working with.

If you can't see the picture above, here are your choices:

Here's how my team looks:

And we've got an extra dollar to spend on a can of St. Ides for the walk to the arena.

Now it's your turn. Assemble your best six and let us know what you came up with in the comments.