Are Robinette, Webb, and Cunningham the new Rodgers, Stacy, and Matthews? Is Vanderbilt ready for the 3-4 defense? Is Temple a full tier better than UMass? What exactly is "Wet Het"? We take a closer look in today's preview.

Share All sharing options for: Thursday Predictions: Temple at Vanderbilt

The Derek Mason era begins on Thursday night - but unlike in years past, the Vanderbilt Commodores won't have to stare down a conference foe under the bright lights of Dudley Field. Instead, the 'Dores will face a lightly-regarded Temple team in a game that ranks down in the bottom third of Mason's toughest contests this fall.

While Temple may provide the stoutest test of Vandy's non-conference schedule, there's a reason that a Commodore squad that's replacing 13 starters from last year's opener is a 14-point favorite. The Owls suffered through a 2-10 season in 2013 that featured losses to teams like Fordham and Idaho. While they were able to keep many of those defeats close (five came by seven points or less), they still rated as the 125th best team in the country. Temple won't roll over - in fact, they have a dynamic young quarterback who led them to a respectable finish last season after emerging as a starter - but they rate closer to Kentucky than Georgia on the wide range of Vanderbilt's threats in 2014.

That's good news for a Vandy team that has questions in every aspect of the game. On offense, they'll have to figure out whether Patton Robinette is this team's quarterback of the future. On defense, they'll have to wait and see if Mason's 3-4 defense translates to wins in Nashville. On special teams, the 'Dores have to replace field goal specialist and kickoff fission scientist Carey Spear. Finally, on the sidelines, we'll all be waiting with baited breath to see if Mason is ready to lead an SEC program as its head coach.

That's a lot of depressing questions to ask immediately after the strongest span of Commodore football since the first World War. The new regime can keep that revolution alive by introducing the Owls to a black and gold buzzsaw this evening, but it won't be an easy task. Vandy will be calling on new safeties, cornerbacks, linebackers, and wide receivers to help guide sophomore quarterback Patton Robinette (three career starts) to victory. Can Mason earn a victory in his first game as the head coach of the Commodores?

Christian D'Andrea: Temple looked like they'd provide a solid defensive test for Derek Mason at the end of the 2013 season, but losing their leading receiver and biggest scoring threat (Robbie Anderson) certainly hurts the Owls. Quarterback P.J. Walker should be able to find some success against a debuting Vandy secondary early on, but I'm betting that an aggressive blitz package and a shaky TU offensive line keeps him from completing too many passes. As an angry Temple commenter mentioned yesterday, his passing skills rise above being merely cromulent, and he plays the game like a more mobile Ausytn Carta-Samuels. The biggest question will be whether or not Mason's team can stop a running quarterback once he breaks free of the pocket. Walker gained 332 yards on the ground last season and can rip off big carries when opportunities present themselves.

The Owls were only outscored by two aggregate points in the seven games Walker started last season. They scored 31.4 points per game with him behind center after scoring just 15.8 in the five contests in which he sat or came in for relief duty. The sophomore quarterback has the skill to put points on the board and make this a tougher matchup than many Vandy fans are expecting.

Stopping Walker would go a long way in redefining these Commodores as a defensive team. James Franklin's teams never had an answer for mobile quarterbacks or the read option. Chopping that leg out from underneath the SEC's explosive offenses would give this team several more opportunities to win conference games. If Walker finds running room and is able to consistently extend drives with his legs then it may be an early warning sign that sends Mason and his crew back to the drawing board.

Offensively, this game will revolve around three relative newcomers - Ralph Webb, Patton Robinette, and Jordan Cunningham. While questions remain about Robinette after an up and down redshirt freshman campaign, Webb and Cunningham have me more excited. If those two can live up to expectations then they could carry any quarterback to a win over Temple. Given last year's performance against Austin Peay, we know that JC can rise to the occasion against overmatched opponents. Webb is more of an unknown, but his all-around game should help take pressure off Patton's shoulders. Expect a few hiccups at first, but the 'Dores should be able to tap into their talent to dispatch the Owls.

In the end, this one probably looks a bit like last year's UMass game, only with a bit more fire in front of a raucous Thursday night home crowd and an opponent who can actually punch back.

The Pick: Vanderbilt 33, Temple 20. Temple was good at losing close games in 2013, but Vandy - and Derek Mason - need to make a statement. It may not be the emphatic win that many fans are hoping for, but Temple may be overlooked in this one thanks to their emerging young quarterback.

The SEC Upset Pick of the Week: Utah State (+6) over TENNESSEE. On Sunday, we are all Aggie fans. Here's hoping that Chuckie Keeton can dismantle some of Butch Jones's masonry in Knoxville.

Andrew VU '04: Derek Mason will attempt to drag the team coached by Dr. Steve Brule Temple Head Football Coach Matt Rhule umm... Administration Specialist, Head Football Coach Nadia Harvin, into "Deep Water," thus getting their Het Wet. Temple's been preparing for this all off-season, though, and have adopted #WetHet as their rallying cry.  Will our deep water approach get their het wet? All but assuredly. Will we be ready for their wet het? We shall see. 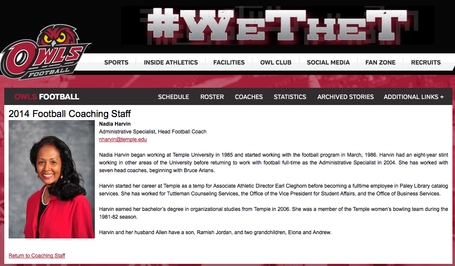 Coach Harvin, apparently, is the first female Division I Head Football coach, and frankly, has done so with surprisingly little fanfare, which, while odd, is a positive development for female coaches working in men's sports. Recently, when Greg Popovich named former WNBA star Becky Hammon as an assistant coach of the San Antonio Spurs, sports news agencies were tripping over themselves to cover this story, peppering the airwaves with nonsense like, "Can a woman really command the attention of a team of grown men" and "When they have to banish her to the woods five days monthly, how will the team fare down a member of its coaching staff?" Supporters of Hammon openly wondered if there ever would be a day when a woman would be given a coaching opportunity in a men's sport and the news would not revolve around her being a woman.

In Administration Specialist, Head Coach Nadia Harvin, they appear to have gotten their wish. Truly, this is a banner moment for proponents of equality in the workforce.

She's certainly qualified, as her resume indicates she's paid her dues, working under seven head coaches while at Temple:

"She has worked with seven head coaches, beginning with Bruce Arians."

Further, despite being named Head Coach, this football lifer has decided to adopt a dual role as her own Administrative Specialist. As most head coaches are perfectionists, it's surprising Harvin is the first to take the "If you want anything done, you have to do it yourself" mindset to the duties of an administrative specialist.  I support it, and will be rooting for Harvin and her boys when they're not playing Vanderbilt.

The Pick: Vanderbilt 17, Temple 3. Though P.J. Walker is certainly a perfectly cromulent quarterback, his het will get far too wet to function against Mason's gritty 3-4 defense. Both touchdowns will be scored by the defense.  As will both field goals.

The SEC Upset Pick of the Week: Wisconsin (+5.5) over LSU. This will be a bloodletting.

VandyTigerPhD: This is a great first game for the new Mason system. It will not be an easy game, but one we should be in control of the entire time.  We can't sleep on em, but we can certainly experiment.

I'm actually really looking forward to this game. Not just because it's the first game, but because we'll get a chance to evaluate the depth of the team. I'm looking forward to seeing second and third team guys get involved early and waylay any concerns that we all have about depth. You know, because that's always a weakness for us.

The Pick: Vanderbilt 28, Temple 10. The new defense is able to cover the passing attack nicely.  A 3-4 embiggens the smallest pass rush.

The SEC Upset Pick of the Week: Wisconsin (+5.5) over LSU. I gotta agree with VU04 on this, that this isn't a push is shocking.  Going to be a close game.

VANDYIMPORT: This is the day we have needed since we got back from Birmingham. It's been a long offseason and we didn't even really get to enjoy the fruits of our victory. Since then it's been nothing but recriminations, changes, uncertainty and impatience for the day we could finally get back to action. (Winning a national title in another sport helps with distraction. Thanks guys.) But this is really a new start. New defensive scheme, all new DBs and WRs, new place kicker...on paper, it's not unreasonable to expect a step backward from last season. Am I reasonable? No I am not. We have things SOV never had after a coaching change: superior athletes, depth and conditioning, and a team and school and fan base that expect to win games we ought to win. And we ought to win this game, make no mistake.

The SEC Upset Pick of the Week: West Virginia 27, Alabama 21. SABAN AIN'T THE MAN FOR THE JOB PAWWWWWWWWWWWWWLLLLLL!