Joe Townsend may be the best center in the SEC. Will 2014 be the year he finally gets some love? Next to him, Jake Bernstein and Spencer Pulley bring some experienced talent back to the Vanderbilt offensive line.

Vanderbilt's season opener is just a day away, and that means that the Commodores are a little over 24 hours away from breaking in a new offense under head coach Derek Mason and offensive coordinator Karl Dorrell. A handful of new stars will get most of the credit if the 'Dores explode for 30+ points against Temple, but the key to the game will be in the trenches where Vandy is returning five players with starting experience. Today, we'll look at the grown men who will be clearing running lanes and keeping the center of the field clear for Patton Robinette.

Joe Townsend (6'4", 312 lbs): Townsend is one of the best offensive linemen in the SEC, but he's rarely singled out by the media. Why? Because he's good enough at his job that you don't have to know his name. Townsend was massive in his efforts to keep defenses away from Patton Robinette and Austyn Carta-Samuels last fall. He's an intelligent center who identifies defensive shifts and adjusts on the fly to deflect pressure from the pocket. While Andrew Jelks may have more raw talent, there isn't a steadier player on the team. A big season in 2014 should clear the way for Townsend to hear his name called at the 2015 NFL Draft. 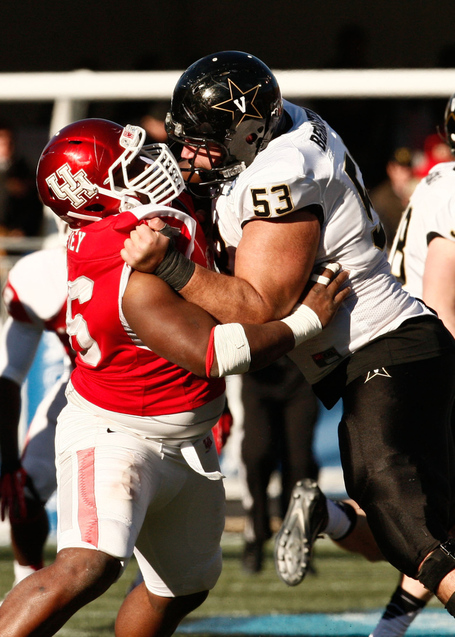 Jake Bernstein (6'4", 306 lbs): Bernstein can play both guard roles on the offensive line, but he settled in at left guard last fall and will help Andrew Jelks protect Robinette's blindside this fall. He gets low and is able to drive defensive linemen back from the line of scrimmage, but he's also fast enough to get into the secondary and clear space for his tailbacks. He's been a huge key to the team's success thanks to his physical style and ability to pancake defenders - the 'Dores have gone 15-3 in the last two seasons when he's started.

Spencer Pulley (6'4", 300 lbs): Pulley plays a bit quicker than Bernstein, allowing him to succeed as a run blocker when let loose against opposing secondaries. That ability to keep lanes open at the second level was key to Jerron Seymour's emergence last fall. He's solid against pass rushers as well, but he's stronger as a player moving forward than he is adjusting to defenders around the pocket.

Barrett Gouger (6'4", 305 lbs): Gouger, a sophomore, earned playing time in 10 games last season and filled in mostly as a reserve guard for the Commodores. He has the athleticism to slide to tackle if needed but may be more comfortable on the interior side of the line. He gets low on his blocks and is tough to move at the point of contact but still has to adapt to playing against faster defensive linemen.

Kevin McCoy (6'5", 295 lbs): McCoy's strength and footwork helped him become a dominant lineman versus high school opponents, but he hasn't yet earned the opportunity to show how those skills have translated against a stronger breed of athlete. He can explode from a three-point stance to move defenders out of the way, but he also has the footwork and strength to drop back and keep pass-rushers from penetrating the pocket. He saw limited time in two games last fall, and while he's improved as a blocker, it may be difficult for him to earn more snaps this season thanks to the depth in front of him.

Delando Crooks (6'5", 312 lbs): Crooks spent last season bulking up for the Commodores and now appears ready to handle his first season of on-field duty against SEC teams. He's got the size and strength to be an NCAA lineman, but he'll have to prove that he can stand up to the pressure that opposing defenses will throw at him this fall. He's quick enough to get upfield and create space for his tailbacks at the next level and he should have plenty of opportunities to make a case for playing time under Karl Dorrell's watch.

Bruno Reagan (6'3", 315 lbs): Reagan isn't just a talented offensive lineman - he's also a decorated high school wrestler (heavyweight champion in Tennessee as a junior) who is also proficient in judo. So, if the whole football thing doesn't work out for him, he'll have a shot at making a name for himself in an MMA landscape that is shallow on legitimate heavyweight talent. He's already added 25 pounds from his high school days and has the strength and balance to upend defenders and use his leverage to clear them out of the way. He's a tough physical blocker who may need time to up his pass blocking skills before making an impact for the Commodores.

Ryan Brockway (6'4", 285 lbs): Brockway, a third year walk-on, has yet to see the field in his Vanderbilt career. It'd be nice to see Mason and his staff give the senior some snaps this fall, but if that doesn't happen he'll still be a valuable part of Vanderbilt's scout team.