Obstensibly, this is a preview of Arkansas football for 2014. More realistically it's just an excuse to volley 800 words at Bret Bielema's fat head.

Share All sharing options for: SEC Football Previews: The Spiteful Wisconsin Resident's Breakdown of Arkansas and Their Meathead Coach

Full disclosure about this Arkansas preview - it's coming from a man who now lives in Madison, Wisconsin.

If you don't know anything about fall in Wisconsin, here's the basic premise. It's two weeks where the leaves change followed by a month when grown adults pretend that 45-degree days are still t-shirt weather. Madison gets national credit for being a counter-culture landing pad like Austin, TX or Portland, OR, but all that really means is that our hippies devolved into hipsters faster than most cities. But hey, if you like weaving in and out of traffic caused by idiots biking through a snowstorm or getting sideswiped by Subaru Outbacks so covered in political bumper stickers that you can't tell what the original paint color might have been, then Madison is the place for you.

There are bright spots, however. No state in the country does beer like Wisconsin, and there are few things that pair better with excessive drinking than football. Camp Randall Stadium is a testament to both. The cheers that emanate from the student section make the entire grandstand smell vaguely of brandy and hops. An airtest of Madison's sewers after a Badger game typically comes in at 18 proof. The legislators at the Capitol might be the most partisan, divided group of politicians in the country, but they can all agree on two counts; old fashioneds are a football drink, and Iowa sucks.

At the center of all this from 2006 to 2012 was Bret Bielema, a defensive coordinator turned head coach who led the team to three Rose Bowls and won none of them. He ditched the Badgers before their third trip to Pasadena for the humid southern climate of Fayetteville, leaving a Big Ten champion for a program coming off a 4-8 season. With that in mind, let's get to our slightly-biased, meathead flavored preview of the University of Arkansas Razorbacks. 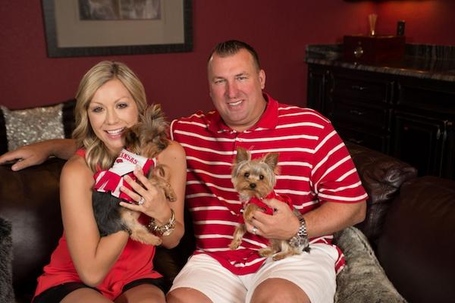 The Coach: Bret Bielema, a man who proved that the only difference between the southern sheriff stereotype and a midwestern white trash dad one is the quality of his tank top and a slick drawl. For Bielema, "Woo Pie Sooie" isn't just an unfortunate typo, but a way of life. The former Iowa lineman had approached local-legend status in Madison before abruptly giving up on a Big Ten Title Game mainstay to help superglue the fractured shards of Bobby Petrino's old program back together.

Bielema's departure caused Wisconsin to pull the husk of Barry Alvarez out of storage for the 2013 Rose Bowl; by the time the administration had finished rehydrating him they'd already lost to Stanford. Badger fans responded by tactfully eliminating all the Korbel brandy within a 10-mile radius of Pasadena. Needless to say, Sconnie fans have yet to find a forgiving place in their hearts for the former coach. Given the popularity of the student section's "Eat shit - Fuck you" chant it seems unlikely that the two sides will find peace in the coming years.

That hostility reached new levels in 2013 when Coach Bielema's lovely wife Jen (above) took a swipe at Badger fans after Wisconsin lost to Arizona State in headscratching fashion thanks to some terrible officiating.

This led to a flood of angry tweets from the UW fans who were still sober enough to type, a nine-game losing streak for the Razorbacks, and a tragically underused #Irony hashtag.

Coach Bielema will certainly deny that his wife's actions have no bearing on his coaching, but just look at that picture above. Does the man holding two dressed-up terriers really look like the kind of person who can say no to his two-factors-too-hot wife? If Mrs. B ends up losing sleep due to the trolling tweets of Badger fans again this fall, you can bet that it'll chip away at #BERT's on-field leadership.

As far as actual gameplanning, Bielema has proven that you can win conference titles behind an offensive line of hosses, a dynamite tailback platoon, and a game managing quarterback ...in the Big Ten. The coach wins games by grinding down opponents and then scorching the earth underneath their worn-out carcasses on his way out. His teams scored 45 or more points against conference opponents nine times in his final three years with the Badgers, a ridiculous margin for a run-first offense. He has yet to score more than 34 points in a game in his short tenure in Fayetteville, so we have yet to see if this strategy will translate in the Southeastern Conference.

But don't take my word for it. Here's what my die-hard UW friend Matt had to say about the coach. Please note that this entry had to be cut down because the first three minutes of his spiel was just incoherent swearing:

Apparently not learning their lesson with the Bobby Petrino scandal, Arkansas hired known frat boy scumbag Bret Bielema to lead them back into contention in 2013. Opening the season against a murderer's row of Louisana Lafayette, Samford, and Southern Miss, it seemed as though Bielema had returned to his early Wisconsin coaching form as he ripped off three straight wins. Unfortunately, his untimely clock management skills and standard failure to win big games (2-4 Bowl Games, losing records against OSU, PSU, and MSU) caught up with him immediately upon entering SEC play. His razorback squad failed to win a single conference game and had such masterpieces as a 0-52 drubbing at Alabama (#karma). This year does not look much more promising as the Razorbacks open as 21 point underdogs at Auburn. Alas, Vandy will have to watch Bielema be fat, fall over, coach from afar as the Hogs do not appear on the schedule.
- Matt, University of Wisconsin graduate, yelling enthusiast.

The Offense: Arkansas scored more points per game than just two SEC teams last season - the Florida program that put up all of 20 points against Georgia Southern and a Kentucky team that was pulling stick figures from the back window of Mark Stoops's SUV to fill in at quarterback at the end of the season. Vanderbilt, a team whose offense basically boiled down to "throw it towards Jordan Matthews's half of the field and hope for the best," outscored them by nearly 10 points per game. Quarterback Brandon Allen committed fully to Bielema's Wisconsin ideals by forcing the Razorbacks to run the ball 75 times per game. He completed less than 50 percent of his passes in the midst of a passable Dustin Sherer impersonation last season.

Things stand to get better because the Hogs can run the hell out of the ball. Jonathan Williams and Alex Collins combined for 1,926 rushing yards last season. That's impressive when you consider that they were both only sophomores and borderline incredible when you consider that they were the only legitimate offensive threats that Arkansas's opponents had to worry about. They'll be back for 2014, but they're just one ill-timed Jen Bielema hashtag away from being the Natural State's first ebola patients.

Oh, and they lost their All-SEC kicker to the NFL. So Vanderbilt and Arkansas have that in common.

The Defense: Gave up 52 points in back-to-back weeks and allowed Samford to take a third-quarter lead on them, but it's still better than the passing game. Trey Flowers is strong enough to bring down a rhinocerous in the open field and leading tackler Alan Turner also returns to shore up the safety position. The Razorbacks sent a handful of good players off to the real world on a nine-game losing streak (Chris Smith, Robert Thomas), but they should be able to rely on a solid defense next year. Good thing the SEC has been known for its pitchers' duels over the last few seasons.

Season Projection: 3-9. Are they a better team than this? Probably. Games against Nicholls State and UAB are surefire wins. Matchups with Mississippi State, Texas Tech, Northern Illinois are all winnable. However, the SEC West is beastly and, well ...#karma can be a funny thing.