Pick Your Poison: Which Vanderbilt Quarterback Had the Best Single Season in the Post-Cutler Years?

Vanderbilt hasn't had much stability at quarterback since Jay Cutler left - but that doesn't mean that there haven't been strong seasons by Commodore passers in the meantime. Today's exercise: pick one Vandy QB from one standout year. Who do you choose?

Share All sharing options for: Pick Your Poison: Which Vanderbilt Quarterback Had the Best Single Season in the Post-Cutler Years?

With less than two weeks to go before the 2014 football season starts, all eyes are on Vanderbilt's quarterbacks. Patton Robinette, Johnny McCrary, and Stephen Rivers are all hitting the home stretch of a competition whose victor will earn the starting role behind center.

They'll be the next link in a chain of passers that has been growing stronger and stronger after the drop-off that followed Jay Cutler's departure. Though the 'Dores have yet to see one of their quarterbacks drafted into the NFL since Smokin' Jay, they have gleaned some big performances from their signal callers in the years passed. There have been some lean years, but players like Chris Nickson, Jordan Rodgers, and Austyn Carta-Samuels have all strung together solid seasons while wearing old gold at Dudley Field.

That led to another Fantasy Friday (since moved to Sunday thanks to the SEC Network and Vanderbilt basketball's travails) question. If you could only pick one quarterback from one season from any full-season Vanderbilt starter, who do you choose. For the sake of argument, let's simplify it to this - the rest of the roster doesn't matter. You have Zac Stacy at tailback, Earl Bennett and Jordan Matthews split wide, and five Wesley Johnsons along the offensive line. You need to win one game against a marauding crew of space aliens who are threatening to lock your Wesley Johnsons up in an intergalactic amusement park if you lose. Which quarterback, based on their best season as a Commodore, will you run with?

Here's a look at your candidates and their best season with the Commodores: 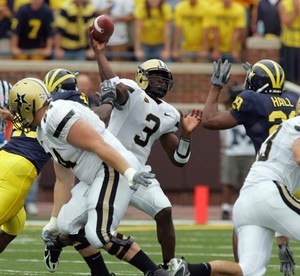 Pros: Nickson is the only player on this list to have been named to an All-SEC team, earning third-team honors for the 2007 preseason after his succesful first year as a starter. He didn't live up to those expectations, but we'll always remember 2006 as a glimmer of hope in an otherwise bleak era. Led the team in both rushing, passing, and scoring (24 combined touchdowns). Biggest win came against Georgia.

Cons: Won only five games and turned the ball over too much. Developed a skittishness in the pocket that would later define his Vandy career. Lost to Tennessee.

Pros: Replaced Chris Nickson as starter when Nickson's body decided getting hit 30 times per game was less fun than it seemed. Added stability and toughness to the quarterback position and kept Vanderbilt competitive late in a 5-7 season. Ran QB sneaks to perfection.

Pros: Had a positive TD:INT ratio. Was solid both times he had the time to plant his feet in the pocket.

Cons: Won two games. Forced to throw everything off his back foot while running for his life. Lost snaps to the immortal Jared Funk. Lost to Tennessee. Inspired a series of these: 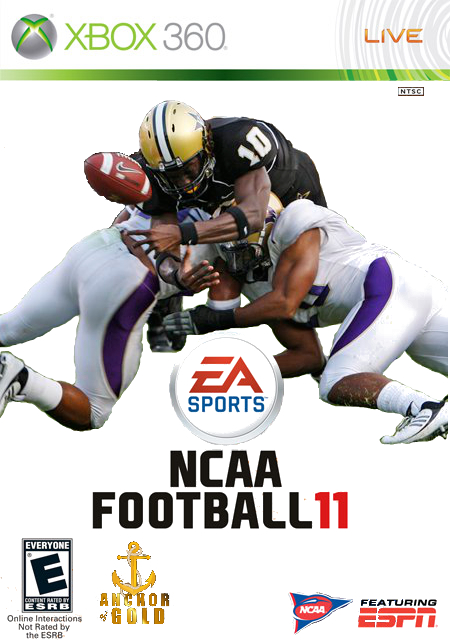 Pros: Threw for the most passing yards of any Vanderbilt quarterback since Cutler. Led Vanderbilt to a nine-win season and shook off a poor bowl performance in the previous year. Showed off improved composure and helped unlock Jordan Matthew's potential as he developed into the most prolific receiver in SEC history. Beat Tennessee.

Cons: Struggled to get his offense moving against the NCAA's halfway decent teams. Had Zac Stacy there to take much of the defensive pressure from his shoulders.

Pros: Was able to catch opposing defenses off guard the first few attempts.

Cons: WHY DID TAILBACK ZAC STACY THROW 10 PASSES AS AN UPPERCLASSMAN??? 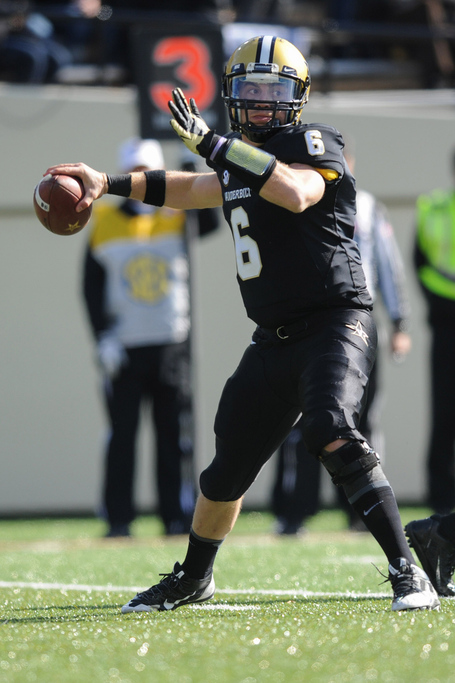 Pros: Played with a broken freakin' neck torn ACL. Threw for more 300-yard games in an injury-shortened season (three) than Rodgers did in his career (zero). Completed more than two-thirds of his passes. Helped turn Jonathan Krause back into a home-run receiving threat. Off-the-field leadership was a major boost for the team. Beat Tennessee (with some help). Was likely to have 3,000+ passing yards if not for his injury.

Cons: Could typically be counted on for one head-scratching interception per game. Missed 3.5 games and had his mobility severely limited due to his bum wheel.

Three players stand out. Nickson was the best all-around athlete but he didn't have the wins that Rodgers and Carta-Samuels had. Rodgers had a prolific senior season but still had his shaky moments. Carta-Samuels had a big arm and a bigger heart, but he never made it through a full season with the Commodores.

Knowing all that, who is your pick to lead the post-Cutler all-stars?