Vanderbilt will have to replace Andre Hal and Steven Clarke, but a cache of young standouts are ready to step into the spotlight. Can Paris Head, Torren McGaster, and Darrius Sims keep Vandy's tradition of strong play in the secondary alive?

Despite recent coaching turnover, Vanderbilt has built up a legacy amongst its cornerbacks in the golden era of SEC football. Players like D.J. Moore, Casey Hayward, Myron Lewis, and Andre Hal have all helped turn the Vandy secondary into no-fly zones for opposing quarterbacks over the past decade. Now, the Commodores will have to turn to young prospects to fill the starting roles that Hal and Steven Clarke left behind after graduating.

Fortunately, Derek Mason has a stocked cupboard with which to work. Three freshmen stepped up to add key depth in 2013 on their way to major roles in 2014. Paris Head, Torren McGaster, and Darrius Sims all had an impact on Vandy's 9-4 season and will compete for the two spots atop Mason's depth chart at CB. They'll have a handful of true and redshirt freshmen behind them to round out the Vandy roster.

It won't be easy to replace the entire Commodore secondary, but a defense stocked with proficient pass rushers should make things easier for Vandy's cover corners this fall. Here's who Mason and his staff will be working with along the sidelines in his first year as head coach.

The Presumptive Starter (at Safety)

Oren Burks (6'3", 212 lbs): Burks wasn't listed in last week's preview of the safety position because he's listed as a defensive back on the official Vandy roster online; a move that was probably a minor error after the redshirt freshman was moved from linebacker to safety this spring. He's impressed Derek Mason due to his size, physical play, and penchant for staying with receivers through lateral cuts. His ability to make plays from sideline to sideline should ease his transition to the new position since he was already a quick, undersized linebacker coming out of high school. His career could mirror Karl Butler's in reverse and he has the tools to contribute for four straight years in Nashville. Burks has the skill to be a hard-hitting deterrent against both the run and the pass. 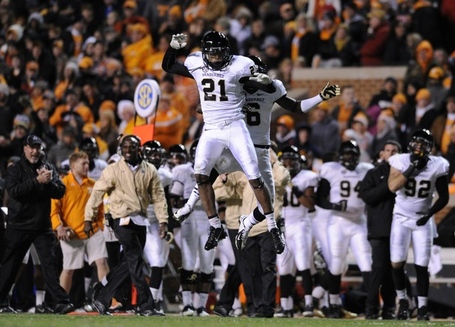 Paris Head (6'0", 185 lbs): Head emerged as a ballhawk in his first year of eligibility and should have the inside track at a starting spot in the defensive backfield this fall. His performance against Tennessee (two interceptions) earned him SEC Freshman of the Week honors and led to his first career start in the following game against Wake Forest. He has great instincts when the ball is in the air, often turning at the precise moment when a play needs to be made and then following through. He doesn't have elite straight-line speed and he's not the natural tackler that Torren McGaster is, but his ability to create plays and sniff out route changes will make him extremely valuable for the Commodores.

Darrius Sims (5'9", 182 lbs): Sims found the field as a true freshman in 2013 thanks to his explosive athletic talents. While he made the biggest impact as a return specialist, the Memphis native also contributed as an extra defensive back in nickel packages last year. He uses his fast-twitch lateral movement to press opposing receivers in coverage and work effectively as a shadow downfield. The knock on Sims is that he's smaller than both Head and McGaster and will be playing for a defensive-minded coach who has a history of riding with big, physical cornerbacks.

Torren McGaster (6'0", 192 lbs): McGaster made an immediate impact for the 'Dores as a redshirt freshman, earning a start against Texas A&M and playing a valuable reserve role throughout the season. He may be the most thorough tackler amongst Vandy's sophomores and he uses his size and strength to bring down opposing ballcarriers near the sidelines. That physical play should make him a valuable resource for this new coaching staff - Mason's corners at Stanford last season all clocked in at around six feet tall and 200 pounds.

Tre Bell (5'11", 172 lbs): Bell redshirted last season after coming to Nashville as a lithe four-star corner from New Jersey. He's a high level athlete who can lose a step when on an opposing receiver's cut and then get it right back thanks to some absurd acceleration and a football IQ that helps him identify plays as they develop. However, Bell is still adding muscle to a frame that is smaller than many of his colleagues at defensive back. He'll have to prove that he can be a disruptive presence against the pass to make up for the difficulties he'll have bringing down bigger ballcarriers. He looked like a much smoother cover-corner this spring, and those improvements could put him in a major role for the 'Dores in the fall.

Taurean Ferguson (5'9", 185 lbs): If this kid isn't already known as "Turd" inside the Commodore locker room then I will have lost all faith in this team. Ferguson did a little bit of everything in high school, contributing as a corner, receiver, and kick returner while emerging as a three-star recruit. The 'Dores will count on that versatility this fall. He moves well and has the ability to stick to receivers but can get outjumped along the sideline thanks to his relative lack of size (5'9"). He'll see time in packages that call for extra DBs in 2014 and will have the chance to play himself into a bigger role in a secondary that remains in flux headed towards official practices.

Ladarius Wiley (6'1", 192 lbs): Wiley may have been an overlooked recruit for many teams, but Derek Mason saw exactly what he wanted in the tall prospect. The 6'1" defensive back fits the mold through which Mason and his staff found success back at Stanford. He showed strong instincts for the ball as a high school safety and was able to jump into passing lanes as plays developed and create chaos. However, he'll be moving over to corner in his first year as a Commodore and may need extra time to adjust to the switch. While he's a strong tackler, he'll have to prove that he can stay with SEC receivers in man-to-man coverage before he sees the field.

Tre Herndon (6'1", 172 lbs): Herndon may look undersized at 172 pounds, but he plays with much more strength that his frame would suggest. Like Wiley, his size will give him the chance to fit into Mason's system from day one, though adding more bulk is still a concern. The Tennessean is a versatile defender who can fit into most schemes but he may struggle to catch up to the SEC's fastest wideouts thanks to average straight-line speed. His length and experience at CB could make him the most likely true freshman to burn his redshirt in the defensive backfield.

Bryce Lewis (6'0", 175 lbs): Lewis is another tall corner who will need to add weight in his first season with the Commodores. He can get lost on cuts and isn't exceptionally fluid laterally, but he has enough speed to close gaps and get to the ball before it reaches its target. This summer/fall's workouts will help improve that hip movement, but time will tell if his hips can catch up to the NCAA game in his first year removed from high school. Lewis is a solid tackler with good instincts for the game, so a big first impression could lead him to action as a true freshman.

Additionally, walk-ons Alex Hysong and Dane Stubbs will have the opportunity to earn some snaps this fall, but they'll face an uphill battle in the face of a deep, young core of cornerbacks in Nashville.