Bulletin Board Material: Boveda Lists Vandy at 250/1 to Win SEC Title - Worst in the Conference

I don't want to live in a world where Kentucky gets significantly better odds than Vanderbilt to win the SEC...but Boveda has the 'Cats at 100/1 and Vandy at 250/1. I guess the bookmakers there still think Woody Widenhofer is the 'Dores head coach.

Share All sharing options for: Bulletin Board Material: Boveda Lists Vandy at 250/1 to Win SEC Title - Worst in the Conference

If Derek Mason was looking for a way to fire his football team up, Bovada just provided him with a flamethrower.

The online bookie has the Commodores as 250/1 underdogs to win the SEC Championship this fall - the worst odds in the conference by a ridiculous margin. No other team started at worse than 100/1 odds.

That's right, even Kentucky -- 4-20 in their last two seasons, 0-3 against Vandy by a combined score of 100-14 in the last three -- is a significant favorite over Mason's team when it comes to lifting that championship trophy in Atlanta this December. 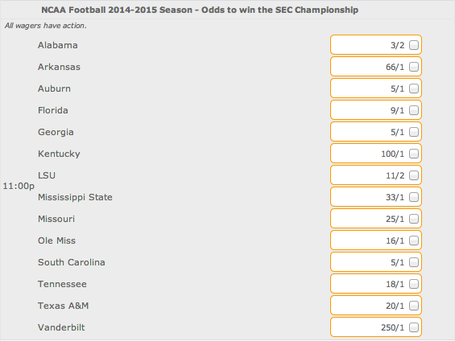 Here's a list of underdogs who got better odds than Vandy currently has to win the SEC: The Miami Marlins to win the 2013 World Series (lost 100 games). Polio vs. Jonas Salk (Salk by TKO). Homer Simpson against Drederick Tatum (Tatum by physics-defying interference by Farah slacks wearing angel).

That's a damning return to the "Same Old Vandy" mentality from Bovada's bookmakers. Vanderbilt will have plenty of challenges to overcome this season. They'll have to replace 13 starters and the most successful coach in program history this fall. However, they also have one of the deepest, most talented rosters that have ever called Dudley Field home ready to play in 2014. They'll be led by the architect of Stanford's defense and have a guy who led UCLA to five straight bowl games running the offense. Rumors of this program's demise have been greatly exaggerated.

Still, it's an indicator of the way the national mentality towards Vanderbilt has snapped back to 2002 now that James Franklin is gone. The Commodores never really got the respect they deserved under Franklin, but that ignorance never dropped to these levels. Throwing the 'Dores out as a 1388% worse bet than their arch rival Tennessee - who they've beaten in the past two years - is the kind of slight that should get this team motivated with summer practices just around the corner.

On the plus side, this is some great action if you believe that Derek Mason can turn this defense into Stanford East and that Johnny McCrary and Jordan Cunningham are the SEC's new Manziel-to-Evans combination. The 'Dores will ease into Mason's first year with an accommodating schedule as well - they get Tennessee, Florida, and South Carolina at home on top of a out-of-conference slate that's as soft as cream cheese. The 'Dores may not win the SEC, but they certainly should not be the heavy favorite to occupy the league's cellar in 2014.

Instead, they can't even sniff Kentucky, according to Bovada. That should be enough to get Darreon Herring ready to hit everyone that comes into his peripheral line of vision this fall.