Expanding the Footprint: A Look at Where Vanderbilt's Football Recruits Have Come From by Coach

Vanderbilt Head Coach Derek Mason told the media that he plans to recruit outside of the south when it comes to luring future Commodores. Was that lip service, or part of a greater overall trend for Vandy football? We look at the numbers to find out.

Share All sharing options for: Expanding the Footprint: A Look at Where Vanderbilt's Football Recruits Have Come From by Coach

On Monday, Derek Mason handled his first ever SEC Media Days press conference with aplomb. The former Stanford assistant and Pacific Time Zone native made it a point to suggest that Vanderbilt would expand its recruiting footprint outside of the southeast in order to reach the players who fit his system the best. It's not just lofty media-speak, either; we saw evidence of that in February when Mason signed high school athletes from states like Texas, California, and Pennsylanvia.

However, is that such a change from what former Commodore coaches have done? James Franklin pushed this team's recruiting into a new stratosphere over the past three and a half years by luring top recruits from across the country to his sideline. Before him, Bobby Johnson didn't have the best options when it came to high school players, but he was always willing to travel outside of the south to find an overlooked athlete who fit in his system. That leads to an important question; will Mason go above and beyond when it comes to creating new recruiting pipelines and expanding the Vanderbilt brand? Or will it be more of an extension of the recruiting that we've seen in the past 10 years?

Here's where Vanderbilt's football recruits have come from over the last decade. While the southeast has dominated the Commodore roster, it's clear that the team is making more of a focus to bring athletes from across the country to Nashville.

Barring a one year dip in 2012, Vanderbilt's recruiting has taken a greater focus towards bringing in student-athletes from outside their local region. However, non-southern students are clearly the minority when it comes to the team's roster over the past decade. 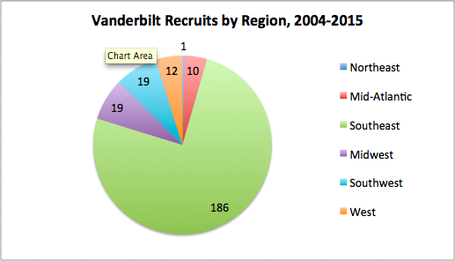 That's a huge advantage for the southeast, which is the Pac-Man that's devouring the other regions in the above pie chart. The midwest and southwest - represented by Texas for the most part - are tied for second but still provided just 10 percent of what the south produced for the 'Dores. The west, by virtue of Vandy's recent push into the area (eight recruits in the past three years), came in fourth. Last place went to the northeast - home of football hotbeds like Vermont, Maine, and Rhode Island - and its lone recruit (and six-year VU veteran) Austin Monahan.

Here's how those non-local recruiting trends look on an annual basis: 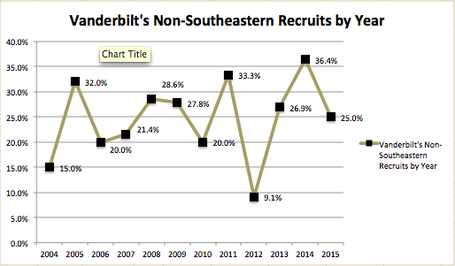 The trendline here moves in a positive direction, even with a big negative outlier in '12. That suggests that the team's shift to adding more non-southern recruits is real. Mason's 2015 number stands to rise as he lands more verbal commitments. He and his staff have feelers out with several recruits in Utah and California thanks to his ties to Stanford. After approximately six months on the job he has had the highest non-local commitment rate of any coach who has taken the helm at Vanderbilt since 2004. 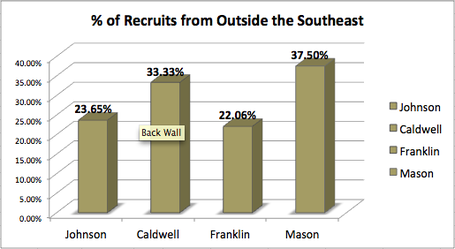 The most surprising entry on this chart is that James Franklin falls behind Bobby Johnson in terms of recruiting diversity. However, Franklin's numbers are skewed by a southeast-heavy 2012. Additionally, this chart does not take the quality of recruit into account; while Johnson cast a wide net to find two-star players who were willing to come to Vanderbilt, Franklin cemented his ties to states like Georgia and Florida to bring highly sought-after players to Nashville.

Robbie Caldwell came in second place, but there were only six players who committed while he was head coach of the Commodores. Much like his 2010 season, there isn't much significant data we can glean from it.

Derek Mason made it a point to tell the media that he plans on extending Vandy's reach on the recruiting trail. He's backed up that claim in his six months on the job so far. The head coach has used his west coast connections to lure players like Nifae Lealao, LaDarius Wiley, and Caleb Peart to the Athens of the South. While it may take a little while for those student athletes to get used to country music and oppressive humidity, they should have less trouble adjusting to the football system they have been hand-picked to lead into the future.

Next Up In College Football