Share All sharing options for: Golden Nugget's Early 2014 College Football Betting Lines Are Out; Let's All Laugh at Tennessee

On Monday, we took a look at what Bovada thinks about Vanderbilt's chances to win the SEC. The oddsmakers there were not very optimistic about Derek Mason's chances in 2014.

Things at the Golden Nugget aren't much brighter for Commodore fans, but at least we can take some schadenfreude-istic pleasure in the fact that bookies there don't have much confidence in the Tennessee Volunteers either. The Las Vegas casino recently released their opening odds for a handful of college football games for the 2014 season, and things aren't looking so good for Vanderbilt's eastern neighbors down I-40. Here's what the Nug has to say about UT's chances in their biggest games this fall.

The Volunteers will be a three-possession underdog just three games into their 2014 campaign. Butch Jones better hope that Utah State and Arkansas State can prep his Vols for a firefight. Otherwise, they'll just be fodder for Oklahoma's inevitable run to a high ranking that they'll crap away against Texas Tech, Iowa State, or someone else equally heartbreaking.

Let's see what else the Nugget has in store for Butch: 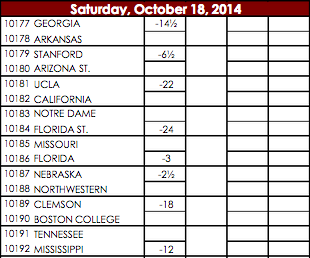 That's a nightmare three-game stretch during which the Vols will be collectively +50 underdogs in SEC play. That leads to an interesting question; does the Golden Nugget just have it in for the Volunteers? -20 to Alabama is understandable. -18 against USC is tougher to understand, especially when the Gamecocks won't have Conor Shaw or Jadeveon Clowney to pace them on either side of the ball. On the other hand, those two engineered a 21-23 upset loss to Tennessee in 2013, so maybe Vegas is assuming that the 'Cocks will turn things around now that Shaw isn't around to complete 33 percent of his passes and get injured against UT. As for Ole Miss...well, Ole Miss has had all the results that Butch Jones has hoped for while reeling in similarly huge recruits. Maybe -12 is totally reasonable.

Ooof. More tough odds. Man, is anyone in the conference even going to sniff -17 odds against a Georgia team that's breaking in a new quarterb-

Well then. It looks like Golden Nugget has it in for any SEC team from the Volunteer State. I wonder, then, what would happen if they broke down the regular season-ending matchup between these two rivals in Nashville. A push with the over/under set at .5 points? A prop bet on whether or not the two teams will combine for fewer than a dozen turnovers? +200 odds on the Norwalk virus breaking out and canceling the game altogether? 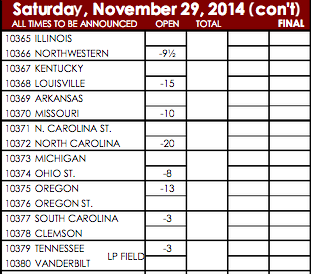 Whoa whoa whoa. -3? LP Field? Does the Golden Nugget know something that we don't here? Last I checked, Vanderbilt was going to be playing at home, the place where they beat their sphincter-drinking brethren 41-18 in 2012.

On the other hand, Bovada thought enough of the Vols to give them SEC Championship odds that were 1388% better than Vandy's; maybe we should be surprised that the line is this close. Of course, all bets are off should the game actually take place on the field where it's scheduled.