Pitching match-ups and open thread for this morning's elimination game.

To be honest, I have no idea who either team is pitching, and I'd be willing to wager both managers are going based on gut feeling rather than any sort of established Sunday starter.  For example, the man Oregon started on their last regular season game, Brando Tessar (this is a real human name, I'm told), gave up 4 runs to Cal in the first inning before being pulled.  On the season, he has 9 starts out of 13 appearances, and is 4-2 with a 4.20 ERA.

Oregon could also go with star freshman Matt Krook, who in 8 starts is 2-1 with a 1.79 ERA., though he is currently undergoing Tommy John surgery.

Xavier, too, doesn't have an established Sunday starter, so they may go with...

Ah, screw it, let's check the tweets.  Oregon has tweeted... nothing helpful, but Xavier just posted the lineup card: 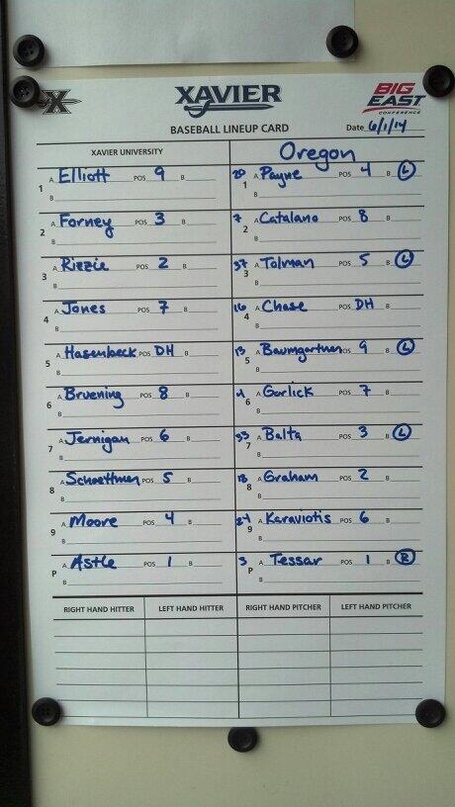 Well, that settles it.

Winner plays Vanderbilt (Vandy will be the "home" team no matter what) at 7pm on ESPN3.