Will the student become the master? Corbin's mentor, Jack Leggett, brings a team that's made its 6th straight NCAA tournament to Nashville (albeit the weakest one he's had since they last missed the tournament).

Share All sharing options for: Better Know a Regional Opponent: The Clemson Tigers

Before coming to Vanderbilt, Tim Corbin spent 9 years as Jack Leggett's right hand man.  During those years (1994-2002), Clemson made the NCAA tournament every year, with 4 - that's right, 4 - trips to Omaha.  In the 12 years that Leggett's been sans Corbin, Clemson's made the tourney a mere 11 times, with but 2 trips to Omaha.  CUE MASSIVE POST HOC ERGO PROPTER HOC LOGICAL FALLACY!  Kidding.  However, though Clemson's been extremely successful under Leggett, it's not debatable that they were even better under both Leggett and Corbin.

The good news is Corbs will know exactly what to expect from Leggett's Tigers.  The bad news is Leggett's not going to be left in the dark when we bunt with runners on first and second FOR SOME GODFORSAKEN REASON I CANNOT COME TO GRIPS WITH, make our 3 hole hitter sac bunt a runner to second down one in the 9th, or leave a starting pitcher in a few batters too long.  Like all of us, Leggett will see it coming.

Oddly enough, these two coaches have never faced each other, and if Oregon beats Clemson in tomorrow's opening game, this might just continue.

Here's to hoping Clemson has a "just happy to be here" mindset after only winning one series this year against a team slated within the 64 in the NCAA Tourney (2 wins against #25 RPI Maryland), being one of the "last 4 teams in" for this tournament, and goes two and 'que.  I wouldn't bet on it, but here's to hoping.

In case we actually have to play them this weekend, let's find out what they bring to the table, besides that rock thingy. 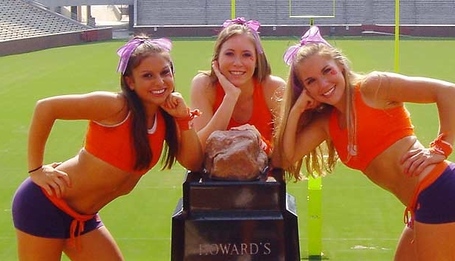 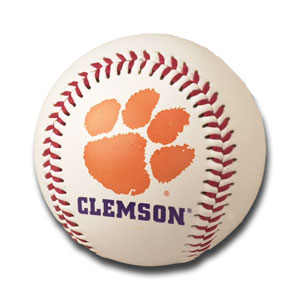 Best Win: On April 5th, Clemson took on Carlos Rodon and his pack of wolves, and plated 6 against the talented lefty (and odds on favorite for the #1 overall pick in this year's MLB draft) to take the game 6-1.  Granted, they lost the next two to lose the series, but still... 6 runs off Rodon.  That just doesn't happen.

Worst Loss: Though their most embarrassing loss was a 14-5 March 18th trolley stomping at the hands of Georgia Southern (#90 RPI), every single Clemson fan will tell you their worst loss was being swept by the South Cackalacky Game Penises 9-6, 10-2, and 5-3 in their yearly rivalry series.  *Note: I was about to make a "that left a bad taste in their mouths..." joke, but this is a classy establishment.

Pitcher(s) to Watch: They've got a pretty good pitching tandem in #23 junior RHP Daniel Gossett (7-1, 1.78 ERA) and #44 sophomore LHP Matthew Crownover (8-5, 2.26 ERA).  Baseball America ranks Gossett as the #90 prospect for the upcoming MLB draft with a fastball that can reach 95mph and a curve that's better than decent.  After that, the cupboard's not exactly bare, but they can be gotten to.

Key Stat: As I stated above, Clemson's only taken one series from a team that's going to be in this tournament.  We will be playing in this tournament, as will two other teams in our region.  This does not bode well for Clemson.