Vanderbilt was one game away from earning a first round bye. Instead, they'll face a familiar rival on Tuesday - and the loser goes home.

Vanderbilt didn't get the job done last weekend, dropping a series to #8 South Carolina at home. As a result, they'll have to play a win-or-go-home game this Tuesday at the SEC Tournament against their arch rivals - Tennessee.

Vandy couldn't keep their recent momentum alive and dropped a decisive rubber match game to the Gamecocks on Sunday, propelling South Carolina to the #4 seed and a first round bye in college baseball's toughest conference tournament. The Commodores finished 17-13 in SEC play and ended the regular season in sixth place. As a result, they'll take on a tough 11th seeded Tennessee team in Tuesday's single-elimination tourney opener. The winner will earn the right to take on a very tough LSU team one day later. 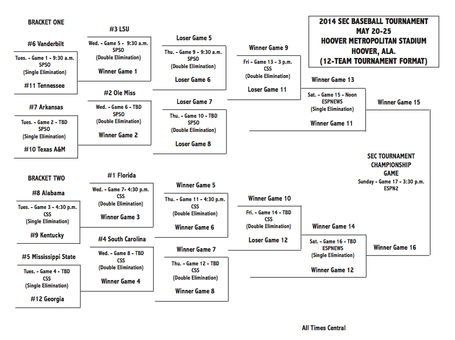 Vanderbilt and Tennessee have already met this season in a three game series. The Volunteers put together a come-from-behind effort to take the final two games of that homestand and, eventually, helped relegate the Commodores to the plebeian side of the bracket. They'll look to keep that train rolling and advance to play #3 LSU with a win. A loss to the Vols tomorrow morning would effectively destroy Vandy's shot at a national seed and could even put their opportunity to host a NCAA Tournament Regional in jeopardy.

Tennessee's recent success against the 'Dores is a bit of an anomaly. Tim Corbin's team had gone 8-1 versus UT in the previous three seasons. The Vols are 1-2 against their prospective second round opponent LSU in 2014, while Vandy is 2-1.

Vanderbilt hasn't won an SEC Tournament since 2007. Tennessee has never won the league title outright, but claimed SEC East championships from 1993-1995 thanks to the outstanding abilities of Todd Helton.

The 2014 SEC Baseball Tournament kicks off tomorrow morning at 9:30AM. We'll have as much coverage as we can cram into the workday here at AoG.