McDonald's loved American athletes so much that the company was willing to give away millions of dollars worth of food to support them in the 1984 Olympics. Of course, a Soviet boycott of those games certainly didn't help things.

In 1984, McDonald's lost millions of dollars - all for loving America too much.

The United States' second-greatest export (behind 1988 film classic They Live) bet big on the 1984 Summer Olympics. They relegated Burger King to plebeian status by outbidding the chain to become the official fat-enabler of the Games and splashed their logo across Olympic venues throughout California, hoping that the spirit of competition would drive athletes to celebrate their triumphs with a Happy Meal, a large Coke, and a smile. For comparison's sake, this was the equivalent of saving money your whole life to buy a Ferrari and then filling the gas tank up with vaseline and angry hornets.

As a result, those 1984 games juxtaposed a 3% body fat wielding Carl Lewis and a burger held together by a special sauce that turned out to just be mayonnaise, fryer oil, and the teenage angst of the kid stuck behind the counter. McDonald's owned the Summer Games in a display of brand synergy that continues to be the only thing that can give Jack Welch an erection anymore. Gold medals and Golden Arches became interwoven concepts as the burger magnate proved that the Olympics could be a moneymaker as long as organizers had the proper soulless touch. The Los Angeles XXIII Olympiad turned out to be the first profitable event for a host city that the Olympics had seen since 1932.

The Summer Olympics were set to return to America in 1984 for the first time since those fateful '32 Games, and it was MacDonald's job to show the Winter Olympics just how badly they sucked. That meant stirring up patriotism the best way they knew how - by buying off American fandom with free fast food.

McDonald's loved America, and they were going to use your grandmother's advice about finding the way to a man's heart to get there. This was the exact moment that cheering for America and cheering for diabetes became one in the same.

The premise of McDonald's promotion was a simple one. Customers earned scratch-off cards with every purchase, and each card had the name of a specific event in the Summer Olympics. If an American - any American - medalled in that event, they won their cosmically-aligned spectators free grub. A gold medal meant a Big Mac, a silver was good for fries, and bronze was the equivalent of a free drink. In the event of an American sweep, you could tell your girlfriend to put on her fanciest pair of Z Cavaricci's and join you down at Daddy Mac's, because the whole meal was on you.

The giveaway looked modest on its face. The United States had only won 94 medals at their last Olympic Games, and only 34 of those were golds. If customers were to come in with cards for free fry/drink orders, it also stood to reason that these loss leader coupons would lead to more thorough purchases for any patrons who ate more than an average middle-school female. It's also worth mentioning that the U.S. had won 0 medals in the previous Olympics due to a boycott - a number that makes McDonald's rationale seem at least a bit sensible.

You see, the Cold War claimed its greatest casualty in 1980 - some 2,500 athletes from 65 countries that had significant objections to the Soviet Union's invasion of Afghanistan. The Games had been set to take place in Moscow, and organizers believed that cutting off the incoming rush of acid-washed jeans and rock music that would have accompanied the western athletes would cripple the USSR's economy and pressure the mega-power into withdrawing its troops. Time would later show that these capitalist pigs were actually doing the powers that be at the Kremlin a favor, but the Soviets stood resolute despite the mounting political pressure.

As the war in Afghanistan waged on, the protesting countries pulled their kindergarten card. They took their ball and went home, deciding that they didn't need to party with Communists to have a good time. In fact, they were going to have their own Olympics - with hookers! And blackjack! And a fanbase best known for their prodigious aim with D-cell batteries! The boycotting athletes convened in Philadelphia for the Liberty Bell Classic that summer, and while several athletes posted results that would have won gold in Moscow, their pursuit was ultimately fruitless.

This politically-driven initiative had prevented more than 500 American athletes from plying their trade in Moscow. That dearth of athletes led to massive medal gains for communist countries and delayed Foreigner from reaching the Soviet capital for another six years. While this prolonged the careers of the boys in RATT and W.A.S.P. for a few extra years, it also lit a competitive fire under the asses of every American athlete who had been denied their chance at Olympic gold in Moscow. Holdovers from that 1980 never-was team were hungry, and they were going to have an easier path to the podium than ever before.

Unfortunately for McDonald's, the Cold War had not ended by 1983, regardless of how many cookie bouquets Ronald Reagan shipped to Leonid Brezhnev each summer. The higher-ups at the Kremlin decided that one bitch move deserved another and pulled nearly every Communist country from the '84 Games. The dominant athletes of the Soviet Union? They were gone. East Germany's record-setting swimmers and their penis-hiding swimsuit technology? Gone. North Korea's intense focus on ping pong? Also gone, though records would later show that Kim Jong-Il won platinum medals in every event while acting as his own horse during Dressage. 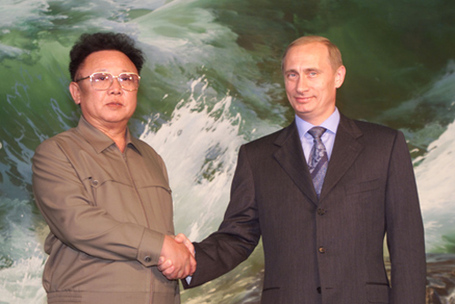 Only Best Korea was invited to the 1980 Olympic Games. via upload.wikimedia.org

That left America to compete against Romania, the Germany that cared more about the Scorpions than track and field, and a China that had yet to realize that eight-year-olds make the best gymnasts. The U.S. had 615 athletes qualify for the '84 Games. Canada, their northern neighbor for whom summer can be counted down in hours, was the only other country to send more than 400. This was presumably because bus tickets from Alberta are inexpensive.

The United States made up for eight years of pent-up Olympic aggression by stomping a mudhole on their competition and then walked themselves clean over athletes from Morocco, New Zealand, and Denmark. It was a bloodbath for McDonald's, but a banner time for anyone who owned stock in the squid ink they use to keep the chain's burger patties together. America's absence had allowed the Soviets to rack up 195 medals - including 80 golds - in Moscow back in 1980. It was a matter of capitalistic pride to beat them at their own game four years later, even if they were half a world away.

The USA took home 174 medals that year, and nearly half of them were golds. Those 83 first-place finishes were an Olympic record, though they came up short of the USSR's overall mark due to the 1980 dominance of the Soviet Ivan Drago in every weight class of boxing (citation needed). That meant that $1.30 Big Macs were flying off the shelves at an equal rate to the 54 cent fries and 50 cent sodas that were meant to be consolation prizes. Instead of hungry customers buying a three-dollar meal to capitalize on a coupon for a 50 cent soda, Americans were ordering free hamburgers, washing them down with other free hamburgers, and then sprinkling Sweet n' Low on more free hamburgers for dessert.

The exact total of how much McDonald's lost isn't clear, but it has been reported to be in the millions of dollars range. The New York Times estimated that the free food handed out was just north of "mindboggling." An executive who was gifted in the art of understatement said of the scratch cards "this is the most successful game. But also the most costly." Within just a few days of the Opening Ceremony, McDonald's franchises were reporting that they were out of stock when it came to giveaway prizes. Since these prizes were burgers, fries, and sodas, that left plenty of stores hurting when it came to serving actual paying customers. Their promotion had somehow turned out to be a more costly failure than the McD.L.T., a burger that was 90% styrofoam packaging. 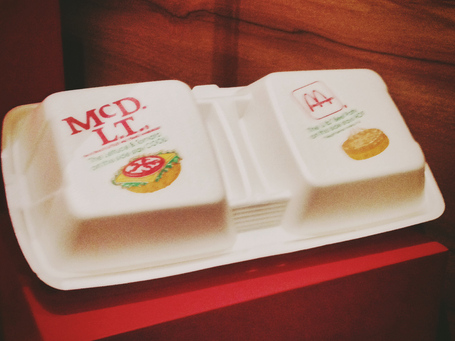 Fortunately, McDonald's learned from this costly mistake and never ran a poorly-planned Olympic-themed giveaway promotion ever again. In America.

However, Australian McDonald's franchises made the SAME BASIC MISTAKE in 2000, albeit with a bit more control over the events they chose to place on patron's scratch cards. Executives in the Oceanic continent believed they could better control their losses thanks to the nation's modest Olympic success. Those cards were loaded with events that Australians had little chance of competing in like the marathon, canoeing, badminton, and handball. Unfortunately, even the balanced competition couldn't stop the company from facing an unexpected giveaway of more than $200,000 worth of Big Macs when Aussie archer Simon Fairweather took home an upset gold in archery that summer.

The legacy of McDonald's giveaway wasn't limited just to the world of sports. This failure was immortalized by another American institution that is also synonymous with decline over time; the Simpsons. The fast food chain's terrible promotion was aped in season four's "Lisa's First Word," which flashed back to 1984 (making Lisa Simpson presently a youthful 31 years old). Back then, Krusty Burger - the official meat-flavored sandwich of the 1984 Olympics - bet hard on the Americans to lose to East Germans that were so pumped full of horse steroids that their swollen testicles were creating unexpected drag in the long jump (their men suffered from unexpected side effects as well).

The ensuing American rout nearly bankrupted the company's namesake clown. While McDonald's may not have suffered the $44 million in personal losses that Springfield's most famous harlequin did, they still became the butt of a joke in a Pantheon-level episode that includes this tremendous exchange:

Krusty (angrily sobbing): You people are pigs! I, personally, am going to spit in every 50th burger!
Homer: I like those odds!

Mickey D's eventually laughed off the losses related to a poorly-planned promotion, and their association with the Olympics has earned the brand an air of prestige in recent years. McDonald's wasn't any more hurt by the 1984 Summer Games than they were by the Arch Deluxe or the revelation that the batter used for their McNuggets is just Elmer's Glue and bat semen. The 1984 Olympic promotion was just another step on the road to becoming one of America's most bulletproof companies. Ronald McDonald would either have to be caught in bed with a dead girl or a live boy to suffer any kind of significant brand blowback in 2014.

McDonald's face-first dive into the world of Olympic competition is cited by some as the spark that lit off a powder keg of consumerism that now hangs artlessly over the games. It was the twinkle in the eye of a father whose gift to the world is a 15-second vignette where Jay Glaser and Michael Phelps are compelled to argue over five dollar footlongs. McDonald's personified the American spirit by diving headfirst into a dangerous situation with little regard for future consequences. Sometimes when you do that, you end up with the greatest country in the world. Other times, you lose millions upon millions of dollars because kids from Cyprus suck at the breaststroke.

For more delicious schadenfreude, be sure to check out the full Schadenfreude Fridays archive at AoG.