A win ensures a winning season for Vanderbilt, but more importantly, it would end Rod Odom and Kyle Fuller's Vanderbilt careers at Memorial Gym on a high note. Here's a breakdown of how the Commodores and LSU match up.

Share All sharing options for: The SEC's Worst Losses: LSU

This about sums up my Vandy/UT basketball experience: 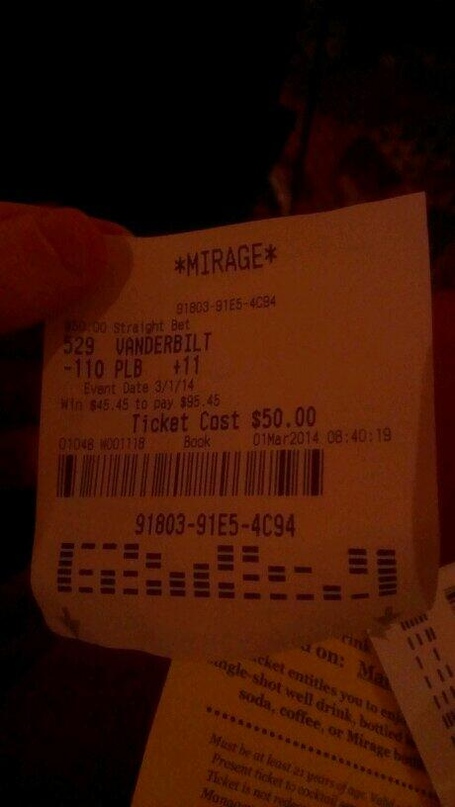 All you need to know about the Tennessee game, assuming that your body blanked it like a plate of bad shellfish, is that the aforementioned ticket above - the one giving Vandy 11 points on the road - wouldn't have been good if the UT had spotted the Commodores an extra 25 points at the start of the game.

Vanderbilt will look to rebound from one of the worst losses in the Stallings era when they take on Louisiana State on Senior Night this Thursday. Washing the taste of a rivalry game defeat won't be easy, especially against a Tiger team that is trending upwards after a series of rebuilding seasons in Baton Rouge. The frontcourt duo of Johnny O'Bryant III and Jordan Mickey have given LSU one of the most formidable one-two punches in the SEC, and they'll keep freshmen Damian Jones and Luke Kornet on their toes in the paint all night. However, the Commodores will be fighting hard to send Kyle Fuller and Rod Odom out with a win in their final game at Memorial Gym. That should give Vandy an extra push behind their home-court advantage on Thursday night.

The Tigers are a very beatable team, however. Let's take a look at how a sub-.500 Atlantic-10 team defeated them to round out the non-conference schedule earlier this year.

Worst Loss: vs. Rhode Island. (13-17, #105 KenPom, #142 CBS RPI), 70-74Other Losses: at Florida, at UMass, at Kentucky, vs. Memphis, vs. Tennessee, at Arkansas, at Georgia, at Ole Miss, at Texas A&M, at Alabama
URI, which was once kind enough to host me as a student, ruins everything. The Rams have been hot garbage for the bulk of the 2013-2014 season, but managed to sneak in a quality win during their non-conference slate by beating LSU in Baton Rouge back in January. They also demolished Richmond, 66-43, on Saturday, which further ruined my Vegas vacation (see above), but that's neither here nor there.
The Rams shot their way to a first-half lead and then expanded that to a 43-31 advantage shortly after halftime. LSU battled back to take the lead, but fouls killed the Tigers late in this game; URI didn't make a field goal in the final 5:30 of regulation, but still put up 10 points over that stretch to stave off a home-team comeback. Burly Lithuanian Gil Birutas led Rhode Island with 19 points and 14 rebounds - and doubled his number of made three-pointers for the season - in what was one of just three wins this season over a top 100 team.

Key to Destruction: Hassling LSU's guards. We mentioned how strong O'Bryant and Mickey are, but the Tigers don't have anyone in their backcourt who can bring the same kind of efficient basketball that LSU's frontcourt pairing can. Anthony Hickey and Andre Stinger are talented veterans who have made the most out of the reduced pressure that having effective big men give them. However, when URI let O'Bryant and Mickey duke it out up front without relying on excessive help defense, Hickey and Stringer struggled to make their own contested shots.

That allowed Mickey to torch the Rams (10-15, 21 points), but also held LSU's starting backcourt to a 6-21 performance from the field. Sixth man Shavon Coleman was especially flustered that night, making just two of his 10 shots. While URI had the less talented big men, their focus on shutting down LSU's little guys ended up being the difference in their upset win on the road.

Keys to the Game:

Vanderbilt needs a pair of wins to finish out the SEC season at .500. A win over either LSU or Ole Miss would also ensure a winning record for 2013-2014 - a tremendous feat given this team's recent attrition. However, the most important aspect of Thursday night's game won't be tied to any records - it'll be connected to the final game in Memorial Gym for a pair of hardworking seniors. Rod Odom and Kyle Fuller have battled through up-and-down careers to finish with a flourish in 2014. That duo deserves a win on Senior Night, and Vandy fans will expect to see the best of each player - reckless drives into the lane for layups for Fuller and momentum-shifting threes for Odom - on full display against LSU.