Kris Kentera, Caleb Azubike, Kyle Woestmann, and other starters have found new positions under head coach Derek Mason. Vandy will switch to a 3-4 defense next season, which means that DEs will now share duties at outside linebacker for the 'Dores.

New Vanderbilt head coach Derek Mason has released his positional chart with the Commodores, and it features some new positions for 2013 starters. Jeff Lockridge of the Tennesseean tweeted out this look at the team's new lineup on Monday afternoon: 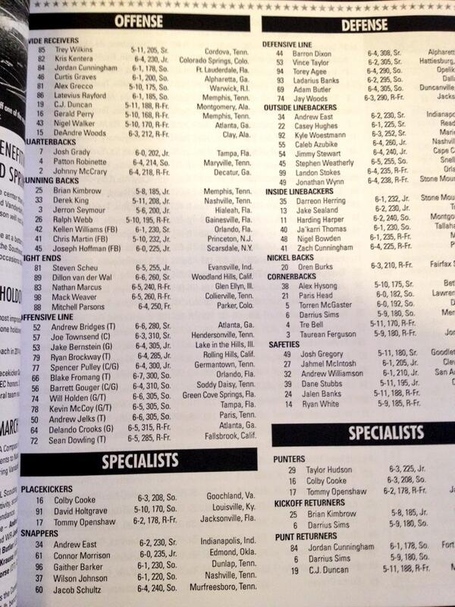 Those listings included some key changes amongst the Commodore personnel. Under Mason, Vanderbilt's defensive line corps has been reduced to only players that are primarily defensive tackles. The team's ends have been grouped in with outside linebackers as a result of Mason's preference to play a 3-4 defense rather than the 4-3 that stood as Vandy's base for the past three years under James Franklin.

That means that Kyle Woestmann and Caleb Azubike, the team's prospective starters at right and left end for 2014, are now linebackers under Mason and Defensive Coordinator David Kotoluski. Darreon Herring, who emerged as a breakout player in 2013 as an outside linebacker, has been shifted to the inside for the spring session. Redshirt freshman Oren Burks seems primed to fill Karl Butler's shoes as a hybrid LB/DB - he's the only player listed by the team as a "Nickel Back."

Mason's chart also moves H-back/tight end Kris Kentera to the receiving corps. Vanderbilt will be hurting for polished pass catchers in 2014 after losing All-American Jordan Matthews and ultimate glue guy Jonathan Krause. While young players like Jordan Cunningham and DeAndre Woods can be counted on to replace some of that production, having an established veteran like Kentera lining up by the sideline could give Vandy's young QBs a steadier target for the fall.

Carlos Burse, a former 4-star recruit who redshirted in 2013, is not listed on the team's positional chart. He is still listed as a part of the team's roster as of 3/10/2014. Senior linebacker Kellen Williams, who had 20 tackles last season, has been moved to the other side of the ball for the spring. He'll handle duties as a fullback under offensive coordinator Karl Dorrell.

Asked Mason about guys no longer on the #Vandy FB roster, including WR Carlos Burse. Didn't address it

UPDATE 2: Burse is no longer with the team.

Mason's first positional release still leaves plenty of questions about this team's makeup headed into spring football. The new coach will have a few weeks to get acclimated to his players and see who fits where for the Commodores. The team will have their first practice of the Mason era tomorrow at 3:50 CST.