It's Monday, so let's ease into the week with another round of Commodore talk. Today's topic: your favorite Vanderbilt men's basketball player.

James Siakam's rise from the deep bench to the starting lineup is one of Vanderbilt's most inspirational stories of 2014. He's overcome long odds as an undersized forward to make an impact in the SEC thanks to a non-stop motor, tenacious work in the paint, and an old school work ethic. Now, thanks to his contributions - including Saturday's 16-point, 10-rebound performance (on just three shot attempts!) to lift Vandy over Texas A&M - the Commodores are in position to finish over .500 in conference play despite having just seven scholarship players on the roster.

But is that enough to make him your favorite player?

Since last week's openthread generated some pretty good discussion, we've decided to bring it back to talk more Vandy basketball favorites. Today, let's talk it out about our favorite players to ever don the black and gold at Memorial Gym. While "Bamba" is quickly earning points on a team full of likable, hard-working players (Odom and Fuller also immediately come to mind), he's still got a long way to go before he can catch my all-time favorite Commodore. 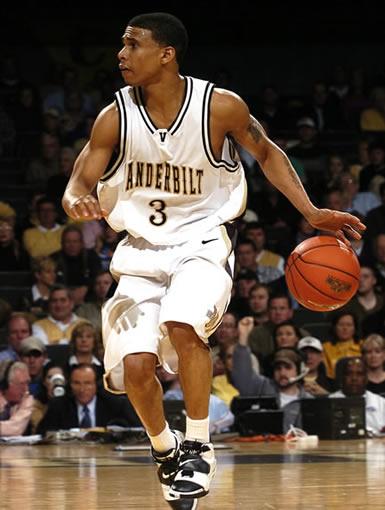 The Commissioner* played with a swagger that consumed the Commodore bench, spreading infectiously to Jermaine Beal and even manifesting in the play of Kyle Fuller. The cocksure point guard could set up an offense, but his main value was as a shooter - and under Kevin Stallings, it was a value the 'Dores wrung every penny out of. However, Gordon never gave an inch on the defensive side of the ball, either. He was strong enough to keep opposing guards out of the paint and fast enough to catch up to ballhandlers no matter how hard he was screened. His attitude made up for the fact that he was generously listed at six feet tall in the Vandy media guides.

There was the scoring, as well. The seven threes against UGA in 2008, the overlooked 12-point performance in the NCAA Tournament against Washington State, and most importantly, the 30 points as a freshman to lead Vanderbilt  over Tennessee.

Red Gordon was my gateway drug for Vandy basketball, and my years on campus directly overlapped his junior and senior seasons. My love for his on-court insanity helped convince me to start writing more on sports (including this KSK-inspired piece of immature goodness), and even eventually led me to AoG, where, if you've been paying attention, I somehow find a way to invoke Gordon's memory at least every other year.

As for the player himself? He's still Red, chucking up over seven three-pointers per game in Turkey, where he's also almost certainly introducing the culture out there to new, cutting-edge swearing techniques.

So consider this your Alex "Robot Soup*" Gordon reminder for 2014. And let us know who your favorite Commodore was in the comments below.

*not an actual Alex Gordon nickname.