Drinking is an all day affair, so cooking may as well be too.

Ah, Homecoming, when you get together with people you haven't seen in (insert multiple of 5) years, realize that (same number) years changes a person, and revert to drinking like you were 18 21 to get back to the common ground that united you so long ago. Alternately, it's a chance take measure of where we stand in relation to old rivals, going on crash diets and investing in prestigious bourbon in a vainglorious attempt at upping your standing with people you never see. No matter your approach, it is definitely a day to bring your A-game to the tailgate. It is a day for ribs.

I'm of the mind that any simpleton can make good ribs. It just takes a time, heat and pork. You can boil them like a savage, braise them like a pro, or steam them like the transcendent being that you are. A nice dry rub, a decent sauce, and you are going to have a crowd pleaser - just like everybody else. If you want to impress people, if you want to remind them you know how to party, if you want to show that girl from Lit 101 that she was as wrong about you as she was about Sylvia Plath, you are going to need beef.

From a fundamental standpoint, cooking beef ribs is no harder than cooking pork ribs. Both need a low-and-slow approach and a moist cooking method. The biggest difference is taste, namely that beef has it. That isn't to say I don't love pork, but it is "the other white meat" for a reason. Chicken can be seasoned with just about anything and slide effortlessly from cuisine to cuisine, and pork is much the same. Beef asserts itself differently, bringing that minerally goodness that shrugs off weak flavors and commands enough respect to have its own adverb. "Tastes like chicken" is a euphemism for bland, and porky is a bawdy 80's movie, but "beefy," well, that gets our juices flowing.

So how does all this translate to our tailgate? As a gastronomic cudgel, that's how. In past articles, I've talked about the importance of balance in a dish. With Chocolate Braised Ribs, we are going to go full tilt with flavors that pile on layer upon layer of umami richness, only bringing in hints of the sweet and salty to round things out.

As always, a few notes before we jump in:

For the ribs, get bone-in short ribs. I like the smaller cuts, 3-4 inches long, as they are fairly manageable. You can buy the bigger slabs and adjust your cooking time accordingly. Trim them up if there is a lot of excess fat, but don't buy any that look really lean. You want that fat around for flavor and moisture. Also, don't buy the cross-cut ribs they sell in thin slices. They do have a place in this world (most notably in Korean cuisine), but they aren't worth a damn for what we are doing.

I list cocoa nibs as an ingredient, but that may or may not be practical. Substitute half as much cocoa powder, give or take, and add it with the other spices. Nibs bring a little more chocolate flavor and a hint more bitterness. Avoid putting in straight chocolate (despite the name of the recipe) to avoid getting too sweet. In a pinch, baker's chocolate would probably work just fine. I've not tested that, but it should do what we need it to do.

On oil, you want a fairly neutral oil here. Olive oil isn't ideal because it doesn't do well under stress. I used grapeseed, but canola is ok if you have it. Peanut oil is considered neutral a lot of times, but I think it has a distinct flavor. It is also relatively expensive and doesn't bring any real advantages to this dish. Save that for stir-fry and use the bottle of Mazola your mom gave you with your Whirley Pop last Christmas.

Lastly, peppers. Puya peppers are listed, but there are a lot of peppers that would work well if you can't find them. Puya are nice because they are sweet (as hot peppers go), a nice size to deal with, and have just a hint of tobacco smell to them. They are slightly hotter, on average, than jalapenos, not quite as hot as serranos. Guajillos would be a good substitute, not as spicy but easier to find. Ancho would be ok, though I wouldn't go with poblanos for this - a dried pepper is really the way to go. If you are really in a pinch, chipotle would probably be your best bet amongst the easiest-to-find peppers. The best thing to remember is that we aren't looking for the brightness of fresh, green-colored fruit, but we aren't looking for the heat of a cayenne either. Chances are, if you live in a place with a grocery store bigger than a gas station, you'll find a suitable pepper. 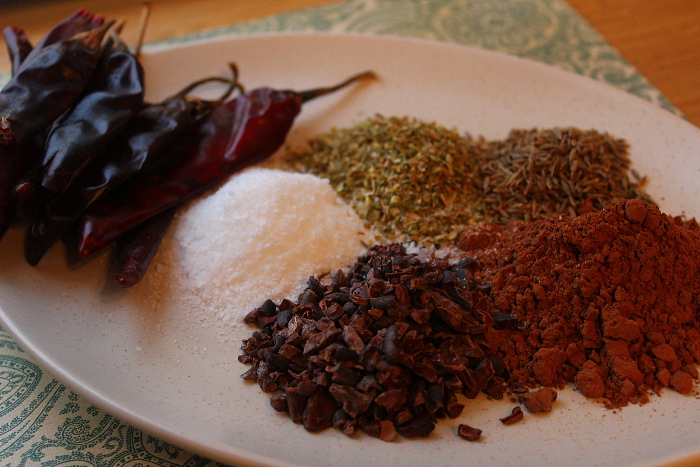 Preheat oven to 350. Mix salt and cocoa - this is your dry rub. Coat ribs liberally with rub. Heat oil over medium heat in an oven-safe pan large enough to hold all of your ribs. Normally, I'd say crank the heat up for a deep sear, but we want to watch that we don't scorch our cocoa. Add your ribs, being careful not to crowd the pan (work in batches if you need to), turning to sear all sides. Each side should take about a minute, maybe a minute and a half. Again, we want some color, but we don't want to scorch anything. Before you turn your ribs for the last time, add the cumin seeds to the oil to toast them a little (if using powder, halve the amount and add it with the other spices). Once your ribs are browned all over, add enough wine to come about 1/3 of the way up the meat. add your nibs and oregano (insert Marge Simpson reference here). Split your peppers down the middle and tuck them in between your ribs, making sure to at least partially submerge them. Cover your pan and place in the oven for 60-90 minutes, turning your ribs halfway through your cooking time.
Why the wide range of time? At this point, there are a lot of variables to consider. The thickness of the meat, the length of time you let it simmer on the stove, and how crowded your pan is all affect the cooking time. If the meat has pulled away from the bone and is tender, it is done enough. If you want them to melt, cook them a little longer. An hour was long enough for my smaller batch, but use your judgment. If your judgment is impaired, go with 90 minutes and have somebody else take them out of the oven. 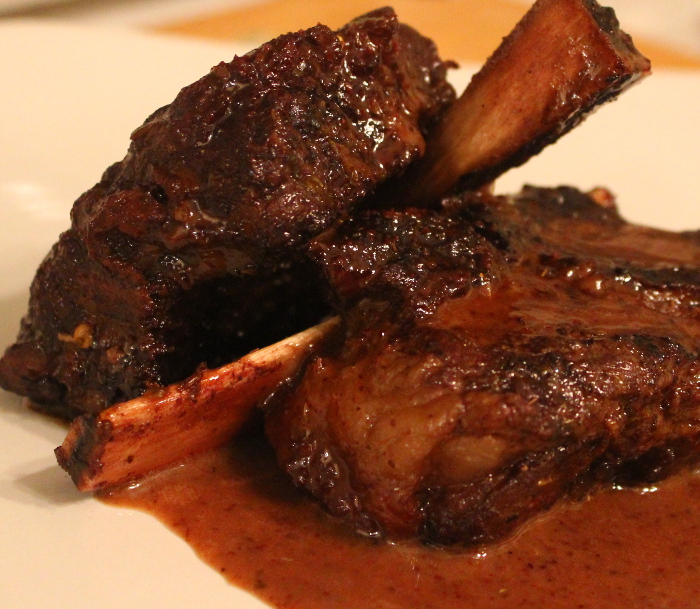 When you are happy with your beef, remove your ribs to a plate to hold. I like to finish them on a grill, which would also be a good way to warm them up for a tailgate, but it isn't necessary. We do need a sauce, though, so put your pan back over a medium flame and bring to a simmer. Add brown sugar and whisk until dissolved. Remove from heat. At this point, you have to make a decision - leave your peppers in, or take them out. Leaving them in adds flavor, but also a lot of heat. Either way, pour into a heat-proof container and blend with a stick blender (or use a stand blender, assuming it is ok to use with hot liquids). Add your butter and blend again. Taste to adjust seasoning. Pour over finished ribs and serve.

An intelligent man is sometimes forced to be drunk to spend time with his football team. -Earnest Hemmingway (not really...)

(Though he would have if he were a Commodores Fan.)

Ok, so Hemingway didn't exactly say that (and before some pedant goes nuts in the comment, yes I know he said "fools" and, no, I don't mean to equate our football team with fools. It's a joke, killjoy). But the man could drink and is often quoted - and misquoted - in reference to alcohol. There is even a drink that legend says was invented for the man: The Papa Doble.

That he drank these is pretty indisputable. What was in them, despite a lot of people claiming to know, is not. It is a basic daiquiri, amended with some combination of cherry liqueur (Luxardo Maraschino to be precise), grapefruit, and maybe simple syrup. Yes, you can post all of the articles you want telling me the exact recipe, but nobody that ever had one says they taste the same. Maybe it was the atmosphere of El Floridita, or the brand of rum, or just drinking with Hemingway, but there is plenty of evidence that the "definitive" recipe is anything but. What I can tell you is that adding 6 drops of Luxardo would do nothing to this drink, nor would the mere 1/4 oz I've seen in other variations. This recipe, cobbled together from other versions and reading way too much about a single cocktail, makes as much sense as anything else I've found.

Let me say, if you have never had a real daiquiri, start there. Rum, lime, simple syrup. Nothing like the utter shite you get at mediocre restaurants, a real daiquiri is worthy of good rum and great company. The Papa Doble rounds out the citrus with grapefruit then hints at cherry with the addition of maraschino. If you can swing it, the shaved ice really does give a refreshing "downhill glacier skiing" element to this drink. If not, serve it on the rocks and repeat until you've penned a great novel. Just remember, "Write drunk; edit sober." 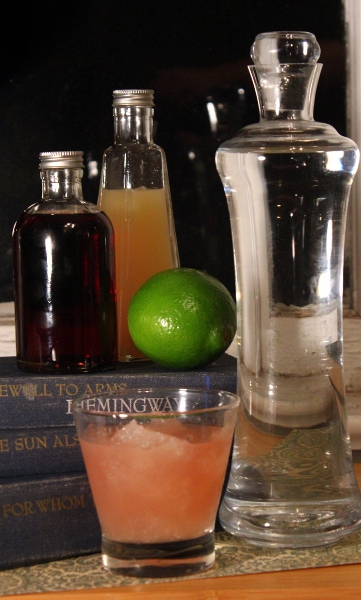