The bye week is #BoozeWeek. We drank poison so you don't have to. Then, we branded some proper insults for said poison. Join us for another installment of the King Can Taste Test.

The bye week is nearly over, but a Vandy-less Saturday gave us plenty of opportunities to keep drinking. After the rousing success (citation needed) of the first three King Can Taste Tests, the AoG community of writers took to arms to reinforce the shattered livers of Christian D'Andrea and his trusted sidekick, Gumbercules. After searching no fewer than six major metropolitan areas for 24-ounce cans of insta-blackout, Andrew VU '04, VandyTigerPhD, Dinard'oh, and Vandy Import all came through with the finest kidney potions they could purchase for $1.99.

Here's what we had to say about the drinks that define America as a country. Or, something:

What it tastes like: A Flaming Moe, light on the flaming, heavy on the Moe. Uva berry is ostensibly grape, but this tastes more like purple to me. And metal. Purple and metal. Should have called this "permanganate"

What it did to me: At first, I was just getting drunk. Then my peripheral vision failed and everything started to fade. As I slipped from conscious to sub-conscious, my existence started to focus around the soft spot of flesh behind my right ear. There was a voice there, revealing awful truths about the world. I prodded under my molars, trying to tongue-punch this skull demon into quiet, but he could not be stopped. "Greg McElroy," he taunted, "is the love child of Rick Astley and k.d. lang." After that, I don't remember anything until I woke to a mess in my kitchen, having tried in vain to recreate the works of Dufy using ramen noodles and Kool-Aid mix. It was only then that I realized I still had half a can left and a duty to fulfill. Pray for Mojo!

Rating: 2 out of 10 (awful, but still better than Heineken)

Cost: $3.35 (plus 10 cents for paper bag) at a little bodega-type market in Mountain View, California, distinguished by a truly amazing array of gentlemen's literature catering to the Asian language enthusiast OPENLY DISPLAYED RIGHT AT THE DOOR.

What it tastes like: An early-September sorority social where the only immediately-available means of spiking the punch was a bottle of Robitussin. Not the good kind with actual codeine, either.

What it reminds me of: Flu-like symptoms. That big-ass water tower in South Carolina or wherever. Zeta Tau Alpha pledge class fundraisers. Trying to impress girls with a "bellini" made of sparkling peach nectar but forgetting to peel or pit the peach before you put it in the blender, then realizing you're out of champagne so why not put some gin in the SodaStream, it's practically the same thing. Ruminating on how you started drinking Manhattans when you got to Vanderbilt and then embarked on a career of serious cocktailing for the past twenty years, while contemplating all the levels of the phrase "peer pressure."

Perfect for: Googling "buyout clause" while idly writing "Mrs. Coach Herb Hand" over and over on your sustainable bamboo desktop in your own blood.

*Full Disclosure: I went to five different Oklahoma City gas stations and one CVS before I realized why I couldn't find any horse poison. Oklahoma's the Utah of being Texas's hat. As such, it's illegal to keep any beer above 3% ABV refrigerated for the purpose of selling it. We can buy regular beer (and Oklahoma craft breweries are pretty damned good, actually), but we have to buy it at room temperature and refrigerate it at home. Until this week, when I was instructed to drink horse poison for my loyal readers, this had never been an issue. Lucky for you, until recently, I'd lived in Louisiana for nine years, and Louisiana's only liquor law is you must always have some on you.

A few years ago - well before I was writing for AoG - the King Can Challenge (Watermelon Edition) was published and the world was introduced to the concept of horse poison. VandyTigerPhD, his Jersey Shore triple popped collared brother Kyle, and yours truly saw it as a challenge to our respective manhoods. Well, I did, at least, and I can be pretty persuasive when liquor is involved. As I wasn't writing for you guys then, and I still have the pictures from that night on my phone, I figured I'd write about it now.

Trust me - a night of drinking horse poison will leave a memory as vivid now as the horror was then. I'm still shaking thinking of the full body delirium tremens suffered the following morning.

What it tastes like: A hobo's nightmare? Rock bottom? Going to The University of Tennessee? Honestly, I've got nothin.  This is ostensibly a strawberry lemonade, though it doesn't even have a remnant of either of those flavors. What it tastes like is despair. Chemical despair. Everclear and Robitussin Cherry, only those are established and recognizable flavors. It's theorized that Colt 45 Strawberry Lemonade Blast is not of this world, and our tongues cannot fully process the 4th dimensional flavors. That, or it's mixed up in a meth-head's camping trailer. Either or.

What it reminds me of: Renal failure.

Perfect for: Getting not drunk, per se, but weird. My friends tell me I started acting like a low life pretty much immediately after drinking it (despite drinking it out of a gold-rimmed crystal chalice from a brewery in Belgium). I don't remember much of that night, but I woke up with a number in my phone with the following picture attached:

When you've successfully charmed the number off a girl with what appears to be a high school Sex Ed textbook diagram of the female anatomy tattooed on her lower back, you know you're behaving as the human equivalent of a long haul trucker's Texas fu man chu. Don't tell the lady friend. Clearly, this is not her. 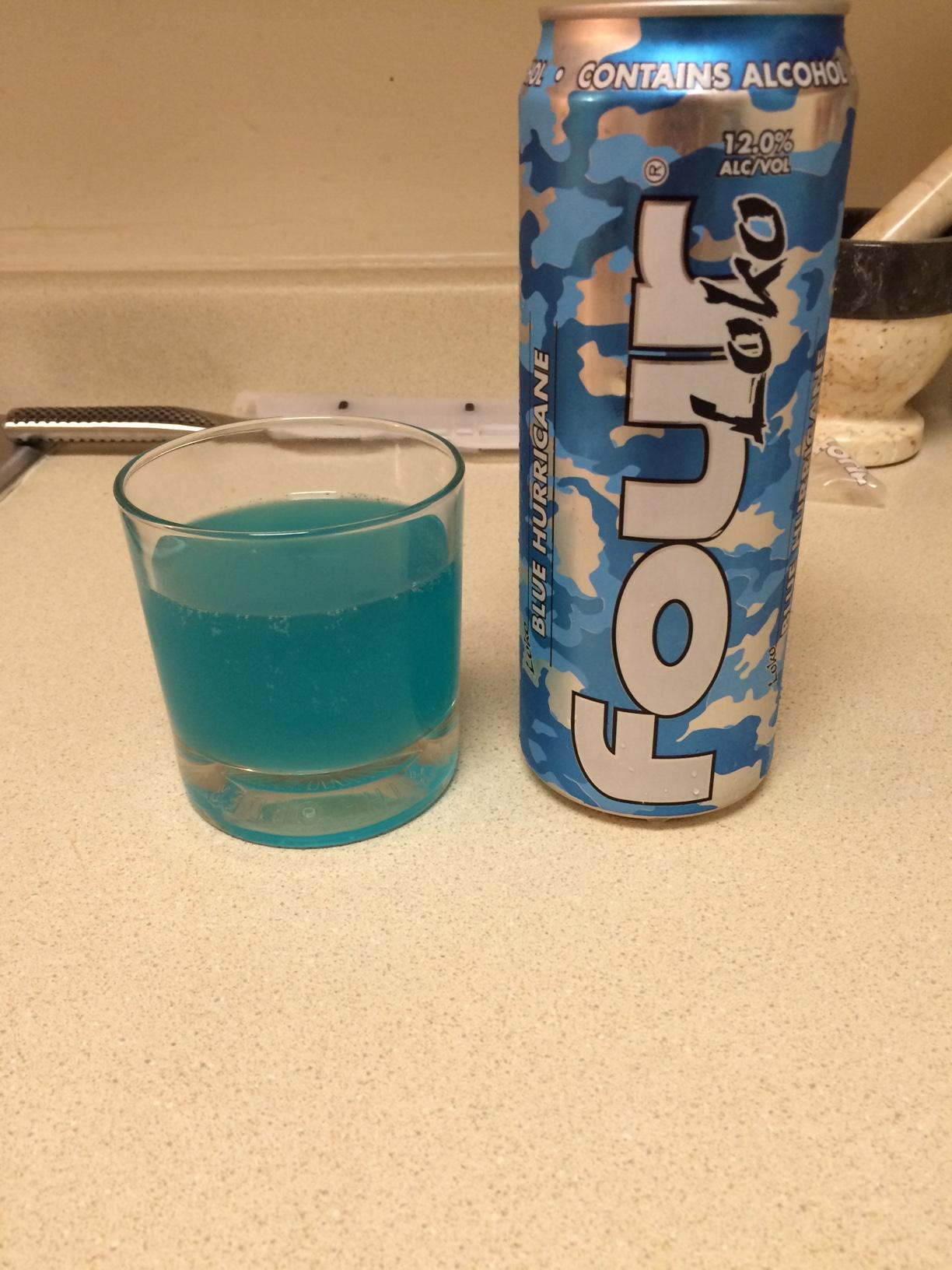 What it tastes like: My first taste was actually pleasant compared to what I was expecting.  By that, I mean, I didn't immediately spit it out.  It kind of tastes like a jolly rancher mixed into highly carbonized seltzer.  Of course, soon after I had my first taste, my stomach reacted like is usually does when I take a huge swill of moonshine - it literally convulsed.  Yes, my stomach objected physically to the presence of the Blue Hurricane.  While I did not vomit, my stomach did several flips in my stomach.  It stopped after the third or fourth sip.  After that, it really did taste like jolly ranchers in fizz.

WHAT IT SMELLS LIKE: I'm adding this because it was necessary.  Just having this in the room in an open glass immediately stank up the room.  Not just in a "hm what's that smell" kind of way, but in an overpowering "ugh gross" kind of way.  Luckily, you're drinking high grav candy-beer, so you don't notice after a little while.

What it reminds me of: Remember when you're a kid and you just try random food combinations just for fun?  It's like that.  It's like someone said, "I wonder what happens when I put 200 blue cranberries into soda".  Only they added alcohol somehow.

Perfect for: Anytime you feel like acting like a manchild.  Nothing quite says "I'm an adult, but I refuse to accept that" like drinking candy flavored beer.

Rating: 2/10.  It honestly could have been much worse.  I've had Coors Lights that have tasted worse than this.  Pabst is considerably worse.

You can find previous editions of our King Can Taste Tests here:

The King Can Taste Test (Part I?)