Hey, a win over a ranked team counts for something right? It's #23 (in FCS) Charleston Southern at Vanderbilt for Homecoming!

It's homecoming, and that means that a throwaway game against Charleston Southern will get a little extra meaning for Vanderbilt this weekend. You know what else will make this FCS matchup meaningful? The possibility that Vandy could lose.

There are plenty of similarities brewing between this game and September's matchup with UMass. Massachusetts is currently ranked 173rd by the Sagarin Ratings. Charleston Southern is 174th. Both teams will walk on to Dudley field as three touchdown underdogs. Either team could turn an upset win into a fireable offense for a first-year coaching staff.

If you've already chased the memories of the Minuteman game away with party liquors, here's a pair of reminders of what Vanderbilt needed to win that game:

So, forgive the lack of optimism that plagues a game that had been penciled in as a "W" back in February. The Buccaneers are the lowest-ranked opponent on the Commodores' schedule, but Vandy is in no position to take any team for granted. Derek Mason doesn't have much to gain by beating Charleston Southern, but losing to the Bucs would skip this team past the Franklin and Johnson eras and throw the skipper in the Woody Widenhofer tier of Vanderbilt coaches. That's not a hospitable climate that can sustain coaching life for more than a few months.

Can Vandy topple CSU on homecoming? Let's get to the predictions.

Christian D'Andrea: Charleston Southern looks like a potential cinderella thanks to a 5-0 record and a national ranking, but a closer look reveals a bakery schedule behind that undefeated record. CSU has:

That's not exactly a murderer's row of opponents. As bad as Vanderbilt has been, the Commodores will be a major step up in competition for the Buccaneers.

Unlike Kentucky, the CSU pass rush won't be vicious enough to keep Wade Freebeck from planting his feet in the pocket. That means that Saturday is going to be our first real chance to see what the freshman looks like in extended time behind comfortable blocking. If Freebeck is for real, he'll be able to cut down the swashbucklers through the air. We saw flashes of his accuracy against South Carolina. Now he has to prove that he can spread this team's offense out beyond his tight ends and make the Bucs earn their paycheck for making the trip to Nashville.

Derek Mason has told the press that he won't be changing up his defense to specifically stop Charleston Southern's triple-option offense. Navy's athletic director read that and immediately called David Williams up to schedule a home-and-home series "in perpetuity, or until Mason leaves the program." Vanderbilt has struggled with the read option and mobile quarterbacks in the past, and the new coach's attitude towards CSU's running game could be taken two ways.

If Saturday's results prove that it's #1, then we have something to build on. James Franklin showed us that a little swagger can go a long way in Nashville. Stopping the Buccaneers isn't a resume-quality achievement, but it's something that will boost these players and should expand Mason's comfort zone with the press.

If it's #2, then the Bucs will find a way to move the ball efficiently and show us that a defensive guru has failed to shore up the biggest hole in the Vanderbilt defense. That would be a huge problem for the Commodores and but another bullet in the chamber for Mason's detractors. If Charleston Southern is able to put up big points on Vandy - and remember, UMass did - then this team is in more trouble than we'd ever imagined.

The SEC Upset Pick of the Week: Louisiana-Monroe (+21.5) to cover over KENTUCKY. I feel a let-down game coming on for the Wildcats. The Warhawks's three wins have come against some terrible teams, but three touchdowns is a lot to lay down for a team that only beat Vandy by 10 despite draping Wade Freebeck in so much blue that he looked like the Cookie Monster every time he dropped back to pass.

Andrew VU '04: I'm not going to pretend I know anything about Charleston Southern. I know their nickname is The Chiefs and they're a minor league hockey team, but that's about it. [Editor's note: confirmed.]

I also won't rehash the "they're 5-0, but have played the Campbell Camels and such" point that will be made continuously and rightly.

What I do know, however, is the triple option.  They run it.  We should be scared.

Triple option teams have been slinging rocks at Goliath for ages, and currently, we're closer to the claymation dog version than the biblical one.  Mason seems to be extremely confident we can stop it.  Me?  I don't know, Davey...

Let's delve a little deeper into exactly what the triple option is.  Basically, on each play, the QB has three running options: 1) Hand it to the up-back running through the A-Gap.  2) Keep it himself.  3) Pitch it to the RB tracking him laterally.  I ran this offense in high school and have the two concussions to prove it.  I threw all of 2 passes in 3 games.  I think.  Again, two concussions.  With one of them, I saw streaks every time I moved my head and forcefully vomited my entire stomach lining at halftime before my coach told me to rub some dirt on it and get back out there.

The reason triple option teams can be such giant killers is it forces defensive players to play assignment football.  Go rogue, get killed.  You'd be surprised how many college football defenders can't hold down their gap or stay in their lane.  Schematic-wise, Mason should be able to shut it down.  In theory.  In theory, communism works.  In theory.  In practice, players tend to want to make the big play, and when they attempt this, a triple option offense will eat your lunch.

Charleston Southern runs a shotgun set triple option (which is the same, but with read-option principles).  I'll let VandyTigerPhD explain that, as I've got eleventy billion essays to grade right now.

This should worry us.  Army game worry us.

The SEC Upset Pick of the Week: ARKANSAS (+10) over Ramajama.  Pawwwwwwwwwl!!! 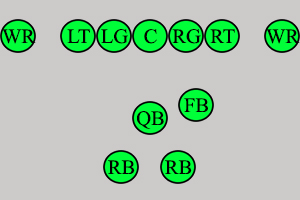 Look at this formation.  Does it look familiar? It should, unless you are very new to college football, or, you don't care about anything other than Vanderbilt football.  If the later of those options is the case, I suggest you check yourself into a mental ward immediately.  Most college football fans know that some 1-AA schools run gimmicky offenses like the flexbone or something to overcompensate for a lack of talent.  If you watched Florida get run over by Georgia Southern for 430 yards, you're used to that (their QB threw 0/3 times that game).  That said, you PROBABLY know this offense best from when Oregon used it a while back.

Yeah, you forgot about that didn't you?  Remember a few years ago when Oregon made the national championship?  Remember how they ran for over 200 (and often more than 200) yards against virtually everyone that year?  This is why.  The Ducks, LOVED this set.  Sometimes, they'd have a back line up like a receiver, and then motion into position.  Another variant that you may know (but I'm too lazy to see if Oregon did) is replacing the FB with a TE up front and moving the RBs to be even with the QB.

The essential function of this kind of offense is simple - take advantage of inexperienced and impatient college kids.  The plays develop quick, and your QB damned well better be able to read the play well.  As VU04 said, a general way this plays out in a triple option is that you first *can* handoff to one guy (who can go up the middle, or maybe to the an edge).  The QB is supposed to read the defense and figure out which way they are "keying" and make a split second decision to actually hand the ball off to the first back, OR to keep it himself and run in another direction with the second back.  From there, he must again key on unblocked defenders and either elect to keep it himself, or hold onto it until the last moment before pitching it to his other RB.

Oh, one other fun thing to add to the mix, those WRs aren't there just for fun, and at any point, you throw it over the top as the defense is blitzing the house to try to stop the run.

Suffice to say, I was not pleased with how lightly Mason seemed to take preparing for this.  To defeat a triple option, you need a ton of discipline.  That is, you need guys who are going to key to the right player no matter what.  You also generally need 3 unblocked defenders on every play... who can tackle.  I would not take it so lightly, even with it being a 1-AA school.

The one thing I'll argue we have on our side is that our defense is actually improving and is not our problem.  Say what you will about the scores, but I'm not blaming the defense for being left out there all damned game.  The defense has been doing a ton to put our offense in the place to score, but they're not.  That said, we do have more talent and *should* win.

The PIck: I'm going full doom and gloom.  Vandy 38 - CSU 35 (OT).  I want to be clear here, I think our defense can handle this task.  I am not, however, convinced that our offense can move the ball, and a few 3-and-outs, combined with a rushing deluge is going to cause problems.

SEC UPSET OF DA WEEK: Bama lost last week, and despite the "blowout", Florida was taking the ball at will (4 takeaways) from Bama.  I'm going with VU04 here and saying that Arkansas (+10) does us all a favor and shuts up Ramajama's PLAYOFF PAWWWL for the season early.  SOOOOOOOOIEEEEE!

The triple option is my friend.  The triple option is something I used to use on Bill Walsh College Football for Sega Genesis to just run the ball down the throat of opponents while milking clock forever.  I grew up in Alabama during the golden age of the wishbone and therefore was in high school before I learned how to throw a spiral. I watched Gerry Dinardo win SEC Coach of the Year for going 5-6 at Vandy using the same I-bone triple option he used as OC at Colorado to win half of an undeserved national title (because five downs).  And obviously, Navy. And Georgia Tech (undefeated at present).  And Georgia Southern basically nuking Florida last year and stepping all over our moment.

I say that to say this: I am scared as hell of the triple option.  Scared. As. Hell. I am more scared as hell that Mason seems to think he can just show up and stop it.  If we lose this game, the frightening thing won't be that we couldn't stop it, it will be that the coach didn't think he had to be ready to stop it.  That would probably be enough to tip me out of the "fire Dorrell" camp and into the "somebody tell Derek about the rabbits" camp.

SEC UPSET OF THE WEEK:  There are some ridiculous picks on the board.  Aggie laying 2.5 against Ole Miss? Florida and a point and a half against LSU? Is homefield really that valuable?  Instead, give me CLANGA (+3) over Auburn.  The football gods will smite the WarTigerPlainsRabbits (seriously, the Jordan "Hare"??) for demonstrating the temerity to bring their own cowbells. #Blessed