James Franklin made history as the first coach to lead Vanderbilt to back-to-back season-ending top 25 rankings. Now, he may be taking his high-energy leadership to Penn State.

#Vandy coach James Franklin has emerged as the clear frontrunner for the vacancy at #PennState, per source

Penn State was originally rumored to have Franklin, Miami coach Al Golden, and former Titans coach Mike Munchak in their top three candidates. While Munchak has become more available due to his recent firing, Golden has rebuffed the Nittany Lions and confirmed that he will be staying in South Beach. Franklin, who played college football at Pennsylvania's East Stroudsburg State, would give PSU a rising star with local ties, a strong history of recruiting, and the demonstrated ability to turn a program around as head coach.

If Feldman's source is correct - and the CBS Sports reporter is typically very reliable - Franklin is expected to leave Nashville for Happy Valley this winter:

If Vandy's James Franklin is the clear favorite for Penn State, as @BFeldmanCBS says, those who know him expect him to take the job.

The team's staff threw additional intrigue into the mix when the Nashville Post reported that coordinators Bob Shoop and John Donovan began following PSU recruits on Twitter this morning. In news that may also be tangentially related, linebackers coach Brent Pry recently turned down an offer to become Georgia Southern's newest head coach. Pry cited his loyalty to Franklin as a big reason why he wanted to stay with the Commodores.

Franklin's players don't seem to know much about their coach's upcoming decision, but they are hoping for resolution to come quickly: 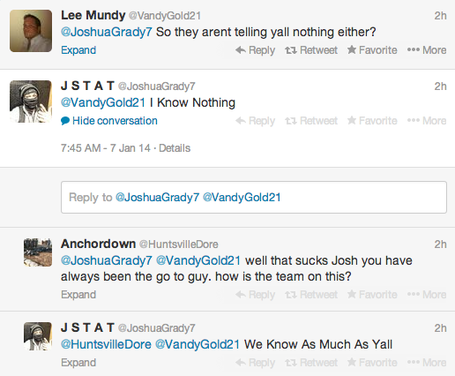 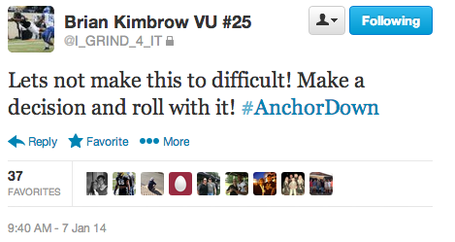 There's no official news from either school or the players involved in this story. It's possible that these rumors go nowhere, or that Franklin is named Penn State's top candidate but turns down any potential offer they bring him. However, the way the winds are blowing suggest that James Franklin's tenure in Nashville may soon come to an end. We'll have more updates on the story as it develops.

UPDATE: AD David Williams tells CBS Sports that he's ready to open up the check book for James Franklin for the third year in a row and expects to keep his coveted head coach:

When asked about Franklin re-upping contractually to stay at Vanderbilt -- which has revised Franklin's deal in each of his first two offseasons there -- Williams said he's expecting as much.