Vanderbilt's coaching staff under Derek Mason is nearly complete, and there's no lack of high-level experience on this squad. The former Stanford assistant has pulled names from across the NCAA and into the NFL with the hopes of improving on last year's nine-win season in 2014.

One of Mason's biggest hires was former UCLA head coach and Texans/Dolphins quarterback coach Karl Dorrell, who will take over John Donovan's role as offensive coordinator. He'll be joined by another NFL mainstay now that Brett Maxie will join the Commodores as a key defensive assistant this fall.

Here's every member of Mason's staff so far. The teams underneath their photographs are the NFL and BCS teams that had employed them before they came to Nashville. 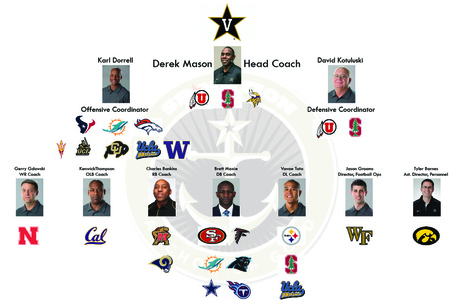 As you can see above, the Commodores' coaching staff features at least nine members who have worked for teams that played in either the NFL or a conference that automatically qualified for BCS bowls. That includes seven Pac-12 programs (Stanford, Utah, Arizona State, Colorado, UCLA, Washington, and California) and three Big Ten teams (Iowa, Nebraska, and Maryland). Coaches like Gdowski and Thompson also have coaching experience at FBS schools like Ohio, New Mexico State, and San Jose State. Keven Lightner, the team's new offensive line coach, has 18 years of coaching experience, but has yet to coach for a BCS program.

That's a wealth of coaching talent for a Vanderbilt program that had struggled to attract high-profile candidates to its head coach position just three years earlier. These veterans will work with a Commodore roster that is more stacked than ever before thanks to a pair of record-setting recruiting hauls in 2012 and 2013. However, they'll have their work cut out for them on a team that is replacing it's starting quarterback, All-American wide receiver, and entire defensive secondary in 2014.