James Franklin Takes Out Ads in the Hustler, Tennessean to Thank Vanderbilt Fans

James Franklin made one last move to win back Commodore fans this week. Half-page ads with the coach's image and a thank-you to the university ran in the Tennessean as well as Vanderbilt's student newspaper.

Share All sharing options for: James Franklin Takes Out Ads in the Hustler, Tennessean to Thank Vanderbilt Fans

Vanderbilt fans got their last bit of James Franklin PR on Thursday when they opened up their daily Tennessean. There was Franklin's smiling face, thanking Commodore fans for his three-year tenure at the SEC university. 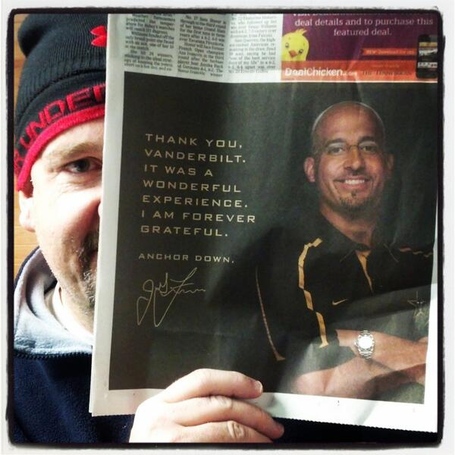 The gesture comes one day after the coach ran the same ad (albeit a bit differently laid out) in Vanderbilt's student newspaper, The Hustler. 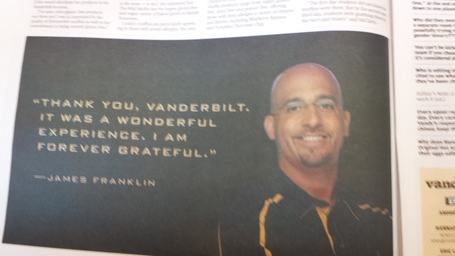 The move could be one of two things. It may be a genuine statement of appreciation from a coach who poured himself into a program and used an opportunity to build Vanderbilt and his own coaching prospects to new heights in three short years. Or, depending on where you stand, it could be a last-gasp effort to save face with a fanbase that has turned on him after he strung along players, fans, and administrators while he played both sides of the coin in negotiating with Penn State.

You know what would have been a better thank you? Not poaching Vanderbilt's goddamn recruits.

Franklin took the Penn State job last Saturday, and since has reached out to several Commodore recruits with scholarship offers in Happy Valley. According to Rivals.com, three players - Brendan Brosnan, Lloyd Tubman, and Chance Sorrell have all picked up anchor to follow the coach to Pennsylvania. Their departures, along with other decomimits who have left VU's Class of 2014, have dropped the Commodores from a fringe top 25 recruiting class to outside the top 50.

While Franklin's gesture is a nice touch, it rings hollow as he actively works to sabotage the team he left behind. With less than a month to go before signing day and no replacement yet to fill Franklin's spot, building this team's incoming class back up will be a tall task for whoever David WIlliams pegs to lead this team into the future.