The Commodore Review: How Vanderbilt Really Looked in Their 38-3 Win Over Austin Peay

Vanderbilt got a gaudy win behind a 35-point second quarter against Austin Peay on Saturday. However, a few mistakes left questions about how that victory will translate to Saturday's game against South Carolina.

Share All sharing options for: The Commodore Review: How Vanderbilt Really Looked in Their 38-3 Win Over Austin Peay

Should Vanderbilt fans be worried about this team's play in the first quarter? So far the Commodores have been outscored 10-3 in that frame this season - and half of those games were against Austin Peay.

Vandy overcame that slow start against Ole Miss to take a lead into the fourth quarter and came back to blow APSU out of the water, but the 'Dores have had little to show from their opening possessions. While that could be chalked up to opening day jitters against the Rebels, their inability to move the chains early against an overmatched Governor team is reason to be concerned.

Consider this: Austyn Carta-Samuels has completed just seven of his 18 passes in the first period this season, totaling only 66 yards through the air. Vanderbilt's tailbacks have run the ball 18 times for 52 yards. That's an anemic offense that would rate as the worst in the SEC if you extrapolated that over two full games. If the 'Dores start that slowly against South Carolina, they won't have a chance to come back against a top 15 program with one of the SEC's stiffest defenses.

However, it might be too soon to bemoan the troubles of Vanderbilt's offense just yet. The 'Dores exploded for 35 points in the second quarter on Saturday, and they would have had even more if Carey Spear hadn't uncharacteristically pushed a midrange field goal wide left late in the quarter. One week before that, they dropped 35 points on a very athletic - if a bit raw - Ole Miss defense.

So, the Commodore offense is capable of hitting top speed, but acceleration has been a problem so far. Vanderbilt came out in a big way in the second quarter on Saturday, but it's difficult to know just how much of that explosion will carry over against an SEC foe. Some features - like Carta-Samuels's picture-perfect deep ball to Jordan Matthews - will be successful against any Commodore opponent. Others, like ACS's touchdown-scoring scrambles, won't be as efficient against more athletic defenses.

It'll take one superlative performance to drag this team out of their first quarter funk against Carolina this week. That could mean a big showing from Carta-Samuels, Matthews, or Jerron Seymour out of the gate. The 'Dores will need someone to drop the hammer in the first quarter and set the tone against a very good Gamecock defense.

There's not much else to apply from a big victory over an undermanned team. The Commodores did everything that they needed to do to run the Governors off the field, and the defense shone with a mix of starters and role players in the first half. Vanderbilt will have to run that defense back on Saturday if they fail to create any offense in the first quarter once again. Otherwise, it'll be a long day in Columbia for the 'Dores. 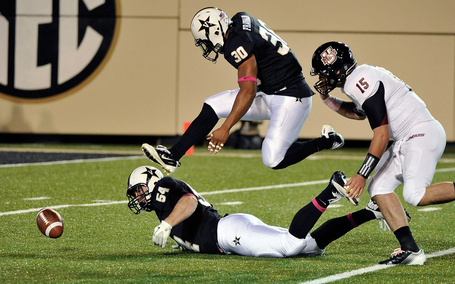 The PiBB ICE Player of the Week: Jimmy Stewart

Technical issues kept us from awarding last week's PIPotW, but that went to established All-American Jordan Matthews. This week, a player who wasn't even considered first-team All-Vanderbilt stepped up in a big way to take home player of the week honors. Jimmy Stewart sits at the far end of the defensive end rotation behind players like Kyle Woestmann and Stephen Weatherly, but he made a big case for more playing time this fall. The redshirt sophomore played an athletic game against APSU, tracking down quarterback Andrew Spivey for a pair of big sacks in the first half of last week's game. However, Stewart also came up big in 2012 against teams like Presbyterian and UMass. He'll have to prove that he can roll one big performance against a low FCS program into a supporting role through the SEC portion of Vanderbilt's schedule if he's going to be an impact player for the Commodores.