The University of Southern California needs a coach. Speculation suggests that the Trojans will take a long look at the guy who has turned a perennial SEC doormat around. Will Pat Haden give James Franklin a call this fall?

Lane Kiffin might have found a way to stick it to the Commodores one last time.

The former Tennessee coach saw his embattled tenure at Southern California end last night, opening up one of the highest-profile coaching positions in the country. Kiffin helped take the Trojans from National Championship contenders to Sun Bowl hopefuls in just four years on the job. Now, the traditional football juggernaut in Los Angeles will be looking to make an impact hire to wash the taste of two lackluster seasons out of boosters' mouths.

Franklin has only been a head coach for two-and-a-half seasons, but he's quickly emerged as one of the hottest up-and-coming leaders in the NCAA. He's been the most successful recruiter of all time in Nashville, bringing a litany of four-star players to a school that whose two-win seasons once far outweighed their bowl bids. Franklin led Vanderbilt to their first nine-win season since 1913 last fall, and he's made the Commodores - who boast a combination of the SEC's toughest academics and worst football legacy - a top 25 recruiting program in a short amount of time.

Franklin's star has been rising fast, and that's set the spotlight directly on his shoulders. It was only a matter of time before some of the country's biggest programs came calling, and USC looks like they may be the first to dial up the Vanderbilt coach in 2013. Here's what Los Angeles Daily News Staff Writer Scott Wolf had to say about the Trojans' coaching search: 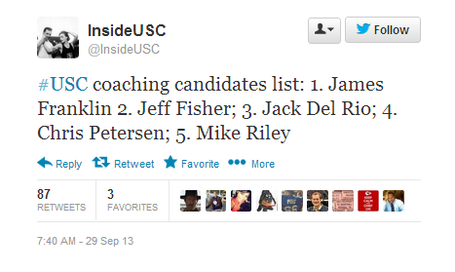 Wolf isn't the only writer who sees Franklin and the Trojans as a natural match. The always-excellent Bruce Feldman suggests that USC could look at the Vandy coach - and that Franklin would jump at the opportunity:

Vanderbilt coach James Franklin, a brash, energetic 41-year-old who has turned a dismal Commodore program that went 2-10 before he arrived into one that finished in the Top 20 one year after he took over. Franklin's a big personality, who like Northwestern's Pat Fitzgerald has thrived in a high-academic environment while in an underdog program. My sources say if offered, Franklin would jump at the job.

Feldman is a respected writer who is a trusted source; as such, Vanderbilt fans can't be too happy with his ultimate sentence. It's easy to understand the advantages that coaching in LA would give Franklin. He'd be able to sell a program whose legacy far outshines Vanderbilt's in a location that few schools can compete with. It's not a stretch to suggest that his recruiting classes would jump from the bottom of the top 25 to the top if he were selling USC to west coast high school players.

That would be an enormous disappointment coming from a leader who has energized Vanderbilt football around the idea of creating a new legacy and building a tradition from the ground up. Franklin has rebuffed advances from interested programs in the past, but he also leveraged that interest into pay raises and promises rebuilt locker rooms and other facilities around the Commodore campus. After two years of increasing their commitment to Franklin, Vanderbilt may no longer have enough to give to their rising star head coach to keep him in town.

This kind of interest was inevitable. Franklin's success has made him a household name in college football circles, and that's something that was previously unheard of from a Vanderbilt head coach. Now, he'll have at least one of the NCAA's five-star football programs gauging his interest in taking the reins this winter (with Texas looming in the background). USC has several advantages that the Commodores can't match, and this summer's recent rape scandal - along with the unfounded accusations that Franklin weathered related to that awful event - may have made a new destination even more tempting for the 41-year-old coach.

But Franklin understands that he's building something special in Nashville, and he's still got two years to go before his first recruiting class can graduate from Vanderbilt. Will that be enough to keep him at the helm of the SEC's biggest turnaround story? Or will the Commodores be looking for a new coach of their own in a few months? Kiffin's firing, and the state of the Southern California coaching search, could end up having a major impact on Vanderbilt football this fall.