The Commodore Review: How Vanderbilt Really Looked in Their 24-7 Win Over UMass

Vanderbilt won, but they didn't inspire much confidence by letting a bad UMass team stick around for three-and-a-half quarters. What did we learn in the Commodores' 24-7 win over the Minutemen?

Share All sharing options for: The Commodore Review: How Vanderbilt Really Looked in Their 24-7 Win Over UMass

It was supposed to be a morale-boosting blowout win. Instead, Vanderbilt found a way to make a 17-point road win something to be concerned about.

Vanderbilt let a bad UMass team hang around for entirely too long, allowing the Minutemen several opportunities to pull off a program-defining upset in Foxboro on Saturday. Fortunately for the Commodores, a defense led by a combination of first and second-team players got the stops they needed to avoid an embarrassing defeat.

The 'Dores struggled to put away a FBS bottom feeder, failing where Wisconsin and Kansas State had been so efficient before. UMass had been giving up 323 rushing yards per game and 7.2 yards per carry headed into Saturday's matchup. Vanderbilt managed just 166 yards on 4.3 yards per rush. The Minutemen had also given up 41 points per game to FBS opponents. Vandy tied FCS foe Maine by scoring 24 points at Gillette Stadium.

Vanderbilt was better on both sides of the ball. Their roster had more talent, more size, and more athleticism than their still-transitioning-to-the-FBS opponent. You wouldn't be able to tell any of that in the first three quarters, though. The UMass defense held strong early on, and the Minutemen used a conservative gameplan to slowly move the chains against a Vanderbilt team that seemed to swarm to the ball a split second late. If a team with a 1-15 record at the FBS level can do that against the Commodores, Florida, Texas A&M, and Georgia must all be licking their chops right now.

Fortunately, the 'Dores have another week to tune things up against an overmatched foe. They'll get Alabama-Birmingham at home this Saturday, and the 1-2 Blazers will give this team a rare mulligan when it comes to exorcising some of the mistakes that allowed UMass to hang around last weekend. However, if they play like they did at Gillette Stadium - a win that bordered on the rare "moral loss" - then the Vanderbilt bandwagon will stand to get a little lighter in 2013. 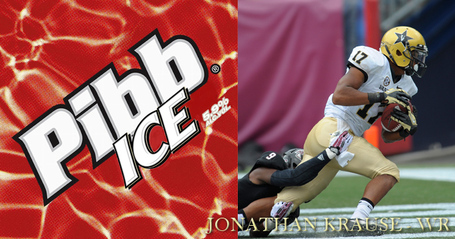 The PiBB Ice Player of the Week: Jonathan Krause

Krause hauled in the first touchdown pass of his career on Saturday and proved that he can fill the role Chris Boyd vacated as this team's #2 wideout. He finished the game with six catches for 105 yards, and he's on pace for about 49 catches and 783 yards this year. Boyd, the guy he's replacing, had 50 catches for 774 yards last year. He hasn't shown that he can match Boyd's intangibles yet, but he's looking like a solid statistical replacement this season.