The Commodore Review: How Vanderbilt Really Looked in Their 35-25 Loss to South Carolina

Vanderbilt came from behind to cover the spread against South Carolina, but their defense never really caught up after being gashed early by Carolina's running game. Can the Commodores be a top-half SEC team with a defense that can't stop the read option?

Share All sharing options for: The Commodore Review: How Vanderbilt Really Looked in Their 35-25 Loss to South Carolina

Vanderbilt has some trouble finishing games - but that's not nearly as troublesome as the team's inability to start them.

Another slow start doomed Vanderbilt on Saturday, as South Carolina ran out to an early 28-0 lead and hung on to fend off the Commodores in a 25-35 loss. The Vandy defense never caught up to the Gamecocks' running game and showed off a continued failure to stop the read option that has haunted this team since 2012. The 'Dores were playing their first SEC game without senior captain Chase Garnham (lower leg injury), and his absence was felt almost immediately. The team's linebacking corps looked disheveled and often trailed behind plays rather than making stops early against USC.

The 'Dores simply couldn't contain the Gamecocks early, and that helped chase fans from Williams-Brice Stadium early in the second half when things seemed to be getting out of hand. It wasn't until Vanderbilt switched over to a wildcat-driven offense that suddenly found holes in what had been an impenetrable South Carolina defense minutes earlier. Wesley Tate, who didn't see any playing time in the first half, proved to be the perfect change of pace back to wear down a tired defense. His strength, patience, and ability to run between the tackles put SC on their heels as he led the scoring drives that turned this game from a blowout into a competitive contest.

And it could have been even more that that. Tate and a pair of special teams fumbles kept the Commodores alive, but Austyn Carta-Samuels and Jordan Cunningham had a chance to make this a three-point game with just under nine minutes to play. Facing third-and-goal at the SC five-yard line, Carta-Samuels never questioned his decision to throw a quick slant to the true freshman in the slot. However, Cunningham was matched up against senior Jimmy Legree, and the veteran saw the play coming from the start. He bumped Cunningham off the line, turned him away from the pass, and then made a difficult catch in the end zone to snuff out the Commodore rally.

Just like that, a potential game-changing drive turned into a game-ending possession for the Gamecocks. It's possible that a Vandy touchdown would have made no difference in the final outcome - South Carolina took the ensuing drive to run nearly eight minutes of game time off the clock to seal this one anyway - but it erased an opportunity for this team to prove themselves on a national scale for the second straight SEC game. This team deserves its props for never giving up, but that can't stem the tide of criticism that a defense that allowed USC to spring for 7.2 yards per play in the first half.

Carta-Samuels and Cunningham can run over that play in their heads a hundred different times this week, but they shouldn't do more than a fraction of the worrying that Defensive Coordinator Bob Shoop must be. South Carolina struck right at Vanderbilt's Achilles' heel and the 'Dores were almost powerless to stop it. This team can win games behind a one-dimensional passing game and adequate rushing attack thanks to Jordan Matthews's ability to lead this team downfield, but they won't have a chance if they keep allowing SEC foes to drop 30+ points on them. Until Vandy fixes that, they can't be a top-half team in the country's toughest football conference. 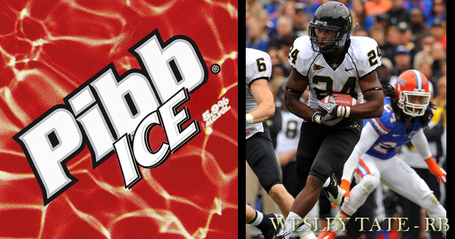 The PiBB Ice Player of the Week: Wesley Tate

Darrius Sims was the favorite for this honor after a terrible first half from the Vandy offense, but it was Tate who led this team back from a 35-7 deficit thanks to his play out of the wildcat formation. After sitting out the first half and allowing Brian Kimbrow and Jerron Seymour to take carries, the senior came in and showed off an extra gear that he had lacked in games against Ole Miss and Austin Peay. Tate looked every bit a featured back, combining the power to run between the tackles and the speed to avoid defenders in traffic. He's a valuable veteran presence who almost single-handedly willed his team's offense back into the game on Saturday.