When Vanderbilt travels to South Carolina this Saturday, the loser of that game will drop to 0-2 in conference play and likely kiss a shot at the SEC Championship goodbye. So what do Vandy fans need to know about the Gamecocks headed into this matchup?

The School: The University of South Carolina

Conference: SEC East (you knew this)

In the past 10 years vs. Vanderbilt: The Gamecocks are 7-3 against Vandy in the last decade. Three of those wins were by a touchdown or less. USCe has won the last four meetings between these two teams.

The Last Time We Saw These Guys: 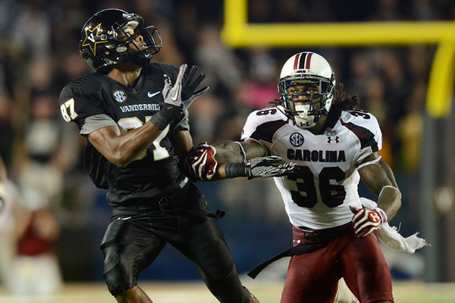 Looks like totally legit defense to me. 17-13, Gamecocks win the 2012 season opener.

Most Potent Offensive Threat: Mike Davis. The sophomore tailback is a compact, explosive runner who already has a pair of 75 yard runs to his credit this season. He had nearly 200 total yards of offense against Georgia thanks to some improved pass-catching skills that have complemented his running ability. His versatility could be the key to opening up Carolina's other home run threats - receiver Shaq Roland and eighth-year junior Swiss Army Knife Bruce Ellington.

Additionally, quarterback Conor Shaw has proven to be elusive when he steps out of the pocket. If the Gamecocks decide to implement the read option against the Commodores, South Carolina could become the latest team to exploit Vanderbilt's biggest weakness.

Most Potent Defensive Threat: Jadeveon Clowney. Clowney had only four tackles against Vanderbilt last year, but they included a sack and another stop behind the line of scrimmage that cost the 'Dores 13 yards in all. His impact, however, goes far beyond the stat line. There's no doubt that James Franklin and his crew have been developing an offense that minimizes the number of plays that even strafe into Clowney's tackling range. The freakishly athletic junior has the strength to push opposing linemen around and the speed to chase down tailbacks from behind. He's the player that could single-handedly swing this game in USCe's favor with a big defensive play.

Matchup to Watch: Clowney versus Wesley Johnson. Clowney is the best defensive end that college football has seen since the days of Bruce Smith at Virginia Tech. Johnson is the rock that has held together a duct tape offensive line and played every position in the trenches for the 'Dores. Johnson will have to use his wealth of experience and skill to keep the more athletic Clowney at bay, but if any lineman in the SEC is up for it, it's the senior captain.

Interesting Fact: Vanderbilt held South Carolina to 17 points last season, primarily due to an injury to quarterback Conor Shaw. After taking a big hit in the first half, Shaw could barely lift his throwing arm over his head thanks to a bum shoulder. Shaw played through this to lead Carolina to a comeback victory, running for 92 yards to offset a 67-yard passing performance in the win.

Bonus Fact!: Bruce Ellington has combined to gain -4 yards against the Commodores in his two games against Vanderbilt. This differs greatly from his tenure with the Gamecock basketball program, where he has rung up the 'Dores to the tune of 14.5 points per game in his career.

If South Carolina wins, we: Sigh disappointingly. South Carolina is going to be a significant favorite on their home field, but Vanderbilt has to feel good about their chances after playing the 'Cocks tough in a sloppy affair to open last season. Vandy has also pulled off some meaningful upsets over USCe in the past. James Franklin and his crew will be looking to regain that magic on Saturday knowing that a loss will drop the team to 1-2. However, getting beaten by a top 15 team with the consensus top pick in the the 2014 NFL Draft roaming the trenches won't be anything to be ashamed of.