After a tumultuous offseason, Vanderbilt will turn to its seniors to guide a ravaged team out of basketball purgatory. Can Rod Odom and Kyle Fuller rise to the challenge and provide the veteran leadership this team desperately needs?

If Vanderbilt basketball has ever had a worse offseason, I haven't heard of it.

After the books closed on a 2012-2013 campaign that ended with a promising flourish, the wheels fell off of Kevin Stallings's team in Nashville. First, little-used freshman shooting guard AJ Astroth announced that he'd be seeking a transfer in April. Weeks later, Sheldon Jeter, who had emerged as a force at the wing for the Commodores, declared that he'd be leaving Memorial Gym to play for a team closer to his western Pennsylvania home. Then, on one awful Monday in late July, Vandy lost two key starters when Kevin Bright and Kedren Johnson announced they were leaving the program on the same day.

Bright, who had returned to his native Germany to care for his sick mother, decided to stay in Europe and turn pro in order to be able to support her financially and emotionally in the coming year. Johnson's departure was more ambiguous and less noble. He was removed from the roster as the result of an unspecified rules violation and is no longer enrolled at Vanderbilt. He'll have the opportunity to work his way back into the school's good graces after a year away from the program.

In a matter of months, Vandy lost its best player and two exciting, emerging wings. An entire recruiting class was wiped off the books as though it had never happened. Now, Vanderbilt can't get through a practice with enough scholarship players to play a proper five-on-five scrimmage. This is the darkest timeline for Commodore basketball. Only two players can make it right.

The two beleaguered seniors will be the heart and soul of the 2013-2014 Commodores, and the success of this team will rest directly on their shoulders. The duo had filled supporting roles in their three years in Nashville, and now the spotlight will shine on them when Vanderbilt opens practice in October. Two guys who have heard their share of criticism will have the chance to shut everyone up this winter, because this is their team - and Vanderbilt basketball isn't going anywhere without Odom and Fuller at the helm.

There's something to be said about experience, even if it comes with some caveats. A look at the pair's stats paints an underwhelming picture, but it also fails to grasp the intangibles that they bring to this team. They'll bank on the experience of playing with and against NBA stars, making a run to a SEC Tournament title, and learning the lessons of a program that has turned middling preseason predictions into NCAA Tournament appearances. They'll have to use that cache of knowledge to not only improve themselves, but to make every other player on this young team better.

For Fuller, it means redemption. After an up and down first two seasons in Nashville, he showed that he holds value as a change of pace guard off the bench. Now that Kedren Johnson's 2013-14 season has been be erased, he's set to absorb more minutes, but the emergence of Tulsa transfer Eric McClellan suggests that Fuller could retain that microwave role as the team's first sub.

When he has embraced that role, he's found room to flourish. His 25-point explosion helped Vandy upset Xavier on the road early in the season. A 19-point performance in the first round of the SEC Tournament brought the 'Dores a key victory over Arkansas - a team that Kevin Stallings has consistently struggled to beat. However, those two performances came three months apart. Fuller had his share of clunkers in between, including a five-game stretch in SEC play where he shot just 18 percent from the field and scored 11 points total (also it should also be noted that Vandy went 4-1 in these games).

Even if the Californian's offense struggles to run at peak efficiency, he can use his bulk and quickness to be a beastly defender. The senior plays like a bull in a china shop, and he is a disruptive presence against opposing backcourts. While his offense fluctuates from night to night, his pressure defense can be the most consistent part of his game. Tapping into that will be the key to his leadership in '13-14. When paired with athletic shooting guard Dai-Jon Parker, he can help the Commodores produce the toughest defensive backcourt in the SEC. 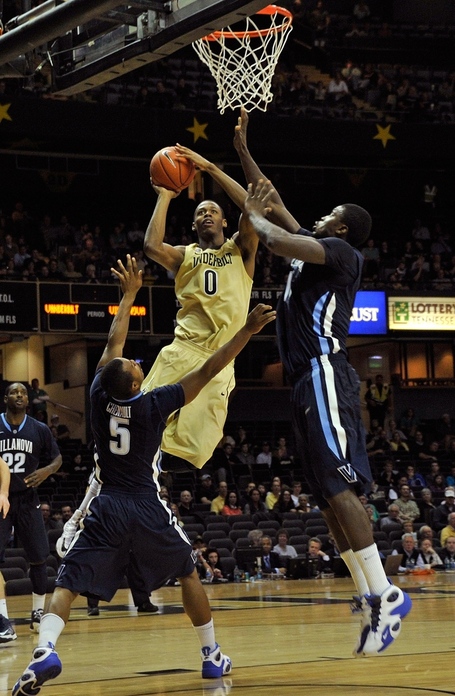 For Odom, it could mean ascension. He was a four-star recruit that showed flashes of promise in his three years with the Commodores, but his needle has pointed more towards "frustrating" than "eye-opening" during his college career. This was especially apparent in 2013, where his affinity for long twos led to an awful 36.5 field goal percentage. Despite his 6'9" frame, the lanky forward does little damage in the paint, and while this fits in with the stretch forwards who have helped Vanderbilt thrive under Kevin Stallings, his lapses as a shooter and rebounder have prevented him from being an effective piece of the Commodore offense.

Odom had never been asked to be a #1 guy in the past. Now, he'll have that role thrust upon him. He'll also have some additional frontcourt support behind him thanks to a healthy Josh Henderson and four-star recruit Damian Jones. That pair will take some of the pressure off of his shoulders when it comes to getting in the paint and playing where he's uncomfortable. It should also keep opposing big men tied to their assignments, which will lead to fewer double teams inside the arc, more of an incentive to drive to the basket, and fewer blocked attempts for Odom.

If the senior is going to be an efficient offensive player, he's going to have to prove that he can score around the basket. His perimeter game is no problem. Even with opposing teams defending against his propensity to shoot, he still managed to make 35 percent of his threes last year and has made about 37 percent of those shots overall. He'll have more room to get that deep ball off if he can dribble into the paint without turning the ball over or having his shot erased by a help defender.

Vanderbilt languished on offense against strong teams last season, and fans were treated to possessions that featured 25 seconds of passing around the three-point line when the 'Dores couldn't get near the basket. Now, they'll roll into 2013-14 without the two players that were the most effective at getting into the paint off the drive - Johnson and Jeter. That means that Odom is going to be responsible for initiating this team's offense in the half court if Fuller, Parker, or McClellan get stonewalled at the perimeter this fall. He'll have to find a way to score from inside the arc beyond the ineffective 20-foot jumpers that torpedoed his scoring efficiency in the past.

If Vanderbilt is going to be successful this season, it's going to take a lot from their senior leaders. Fuller and Odom have proven to be hard-working players who lead by example, but it's going to take more than just that leadership to guide the 'Dores through these troubled waters. Both players will have to work on skills that are outside of their comfort zone and make them a consistent weapon in their arsenal. That's a tall task, and it's not something that you'd expect from an underclassman player.

But Fuller and Odom are seniors. They know Vanderbilt basketball. They know the SEC. They've paid their dues, and now this team is theirs. How that team turns out will depend on the work they do in the gym this summer and on the court this winter.