With Kedren Johnson and the Class of 2012 Now Gone, What Does Vanderbilt Basketball Look Like?

Vanderbilt didn't lose a single senior to graduation last year, but they'll head into the 2013-2014 season without four key players thanks to transfers and disciplinary action. So what does this team look like headed into the fall?

Share All sharing options for: With Kedren Johnson and the Class of 2012 Now Gone, What Does Vanderbilt Basketball Look Like?

At the end of the 2012-2013, things were looking up for Vanderbilt basketball. That team ended their rebuilding season with a 6-2 stretch that included a key win over Kentucky. A senior-free roster meant that this team would lose zero players to graduation. Hopes for a return to the NCAA Tournament in 2014 were high, and not all that far-fetched.

And now, five months later, Kevin Stallings is looking at four holes on his roster where talented players used to be. Holes that may sink this team's postseason chances before the season can even start.

Four players - A.J. Astroth, Sheldon Jeter, Kevin Bright, and Kedren Johnson have all announced that they won't be playing for the Commodores next season. For Johnson, his absence is a matter of disciplinary action. The other three players all decided to leave Nashville on their own volition. Here's the story behind each player's departure:

Astroth - After failing to crack the Vanderbilt rotation in 2012-2013, Astroth was the first Commodore to announce his intention to transfer. He recently declared that he'll be playing his college ball at Towson University next fall.

Jeter - Jeter emerged as one of the Commodores' most talented young players last year, and he was primed for a big role in 2014. However, he decided that he wanted to play in a setting closer to his Beaver Falls, PA home and announced his intention to transfer to the University of Pittsburgh. That didn't sit well with Coach Stallings, who blocked his transfer amid rumors of tampering. Where he'll continue his college career is still unclear. You can read up on that entire saga here.

Bright - Bright returned to Germany earlier in July to take care of his sick mother. After discussing the issue with his family, Vanderbilt's starting small forward decided to remain in his home country for the foreseeable future. He signed a contract with the Fraport Skyliners in Frankfort on Monday, which ended his NCAA eligibility and began his professional career.

Johnson - Johnson threw Vandy fans a curveball when he announced on Monday that he was no longer enrolled at the university as a result of "some very poor judgement." He'll miss the 2013-2014 season, but also made it clear that he can return to the team once he serves his time.

Instead of having a deep, experienced team this fall, Vanderbilt will boast a roster that has only six players that played more than six minutes total for the Commodores in 2012-2013. The addition of Tulsa transfer Eric McClellan, who sat out last year due to NCAA restrictions, will give the Commodores seven returning scholarship players for 2013-2014. After losing more than 90 percent of their production from the 2012 team, Vandy will now have to replace players that took up 39.6 percent of the team's floor time and 43 percent of its scoring. The addition of McClellan and four-star freshman center Damian Jones will help, but they'll have to be able to log big minutes almost immediately to keep this team afloat. 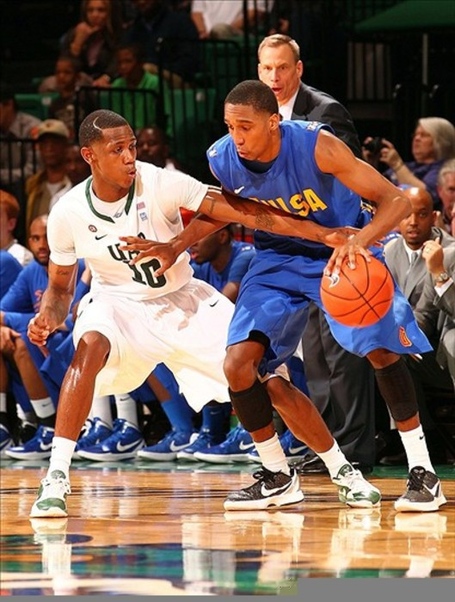 Here's how Vanderbilt's lineup will shake out, with returning players earning precedence in this very early depth chart projection. Walk-ons and non-scholarship players have been excluded from this lineup:

It looks like those walk-ons are due for some minutes in 2013 - particularly in the backcourt. Guys like Carter Josephs, Alex Gendelman, and Nathan Watkins could see some meaningful playing time off the ball since Vanderbilt now looks more like a camp for budding big men than a Big Six basketball team right now. Only one player on the bench - Siakam - has earned playing time for the 'Dores in the past, and he will probably be stretched between the 3 and 4 as as undersized combo forward.

That will put a ton of pressure on Vanderbilt's two seniors. Kyle Fuller and Rod Odom have struggled with consistency in the past, and they'll have to put those up-and-down seasons in the rearview mirror to keep this team hovering around .500 in 2013-2014. Odom has been the more consistent of the two and gives Vandy a steady scoring presence thanks to a jumper that started to come around late last spring, but Fuller may well be this team's most important player when the season tips off at Memorial Gym. The headstrong veteran was a key component in Vandy's late surge thanks to his play off the bench, and he may have the most raw scoring potential of anyone on the team. When you combine that with his physical defense, you've got a solid two-way player - on the nights when Fuller can put it all together.

Behind those two, Dai-Jon Parker, Shelby Moats, and Josh Henderson will have to prove that they are ready for a big jump in playing time. Parker and Henderson had their minutes clipped in 2012 by suspension and injury, respectively, while Moats had some trouble adjusting to SEC basketball. As a trio, they combined for about 65.6 minutes per game last spring. This fall, pending the development of freshmen like Damian Jones and Luke Kornet, they'll have to push that number closer to 90 minutes.

That brings us to the newcomers. Jones was the jewel of Stallings's 2013 recruiting class. He's a four-star big man who can play center at 6'10" and 230 pounds, and his athleticism and ability to play defense in the paint should make him an instant addition to the rotation. He could provide some nastiness to counter Henderson's finesse offense in the paint. Kornet is a bit more raw as a player, but he's a solid shooting power forward who can bring a Steve Tchiengang presence to this team. However, he'll need to add bulk and polish his defensive game before he can be a consistent contributor.

McClellan, the former Golden Hurricane, may be the most important player to make his Vandy debut in 2013. The 6'4" point guard brings the length to cover both backcourt positions, and he's earned high reviews from teammates for his play in practice. He wasn't a high-volume shooter during his one season in Tulsa, but he's primed for a much bigger offensive role this fall. He'll be tabbed to handle immediate minutes in Nashville as one of only three scholarship guards on the roster.

Kevin Stallings's 2013-2014 roster is a pretty big departure from what it had projected to be only five months earlier. Losing a young, dynamic core will undoubtedly hurt this team, but there are pieces in place to keep the wheels from falling off. The pressure will be on this team's veterans to lead this team through the hardship and keep Nashville as a desirable destination for incoming recruits. If they can't do that, then Vanderbilt could be in for an extended dark period.