Vanderbilt's offensive line has been a point of weakness in the past, but Herb Hand's boys have shown tremendous growth over the last two seasons. Can they block well enough to let new QB Austyn Carta-Samuels get comfortable in the pocket?

Vanderbilt's offensive line has taken its fair share of criticism in the past few seasons, but one thing that even the staunchest critic can't blast the 'Dores for is a lack of growth.

The 2011 edition of Commodore offensive line began play with the consistency of cheesecloth and was best known for sending Larry Smith running towards his own end zone on third down, but they finished out the year by giving Jordan Rodgers just enough time to find receivers downfield in a six-win season. Things weren't as bad to start the 2012 season, but a growing line that featured plenty of question marks transformed into a dynamic unit that helped run the 'Dores out to a seven-game winning streak to close out the year. Now, in 2013, they'll look to continue that growth and become one of the SEC's best lines.

That's a tall task in a conference filled with massive blockers, but Vanderbilt is primed for a big season under the tutelage of positional coach Herb Hand. The Commodores will be led by preseason All-SEC tackle Wesley Johnson, who was one of three 'Dores to represent the team at SEC Media Days last week. The three-year starter has emerged as Vandy's most consistent lineman while filling in at every position in the trenches. He'll be joined by junior Joe Townsend and redshirt sophomore Jake Bernstein to provide the core of Vandy's dynamic O-Line. From there, returning players like Andrew Bridges and Chase White will battle rising stars like Andrew Jelks and Kevin McCoy for the chance to build up the Commodore offense on the gridiron this fall.

In terms of talent alone, this may be the deepest group that Vanderbilt has fielded up front in over a decade. Let's take a deeper look at who will be protecting Austyn Carta-Samuels, Wesley Tate, Brian Kimbrow, and Jerron Seymour in 2013.

Wesley Johnson (RT) - Butkus Award watch list member, All-SEC player, and a starter at every position on the offensive line, Johnson has been the foundation for this line's renaissance. His versatility and durability will make him one of the most important members of this team's offense in 2013. He's solid in both run and pass protection, and he'll be counted on to lead this offense from the trenches as a senior captain. With a big season, he could be the 'Dores highest drafted lineman since Chris Williams was a first round pick for the Bears in 2008. 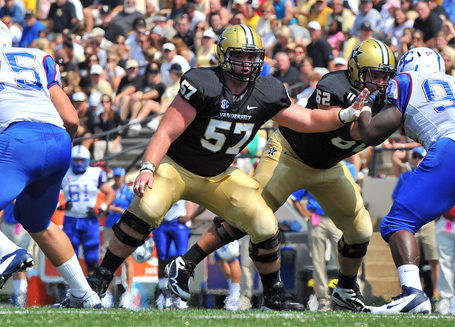 via cdn0.sbnation.com
Joe Townsend (C) - Townsend's season hit a high point when he was named the SEC lineman of the Week after he paved the way for Zac Stacy to break the Vanderbilt all-time rushing record against Auburn. That came only three games into his career as a SEC starter, but the sophomore proved that he could maintain that pace as he finished up the season as one of the team's most consistent blockers. "JTown" has good size at center, and he's got all-SEC potential in a conference filled with future NFL linemen. He's not going to blow anyone away with his athleticism, but he's a strong, hardworking player who can pancake opposing linemen and create holes for his tailbacks. He's primed for a big season in 2013.

Jake Bernstein (LG/RG) - Bernstein's rise as a starter coincided with Vanderbilt's seven-game winning streak to end last season, and he'll have the inside shot at earning one of the starting guard roles in 2013. The redshirt sophomore has an aggressive streak that makes him a good run blocker, and he's well suited on the interior of the line. He may not have the flexibility to seal off the edges at either tackle slot, but Bernstein is a steady guard who should improve considerably in his remaining three years of eligibility.

Andrew Bridges (RT) - Bridges began 2012 as a starter at right tackle, then ceded playing time when Wesley Johnson was moved to that slot. The redshirt junior is undersized at just 255 pounds, but he's a solid athlete and a strong blocker downfield. That makes him a good fit in Franklin's screen-heavy offense. His combination of strong hands and quick feet will make him an asset for the 'Dores, and he'll also pick up some snaps at tight end in the team's jumbo packages. 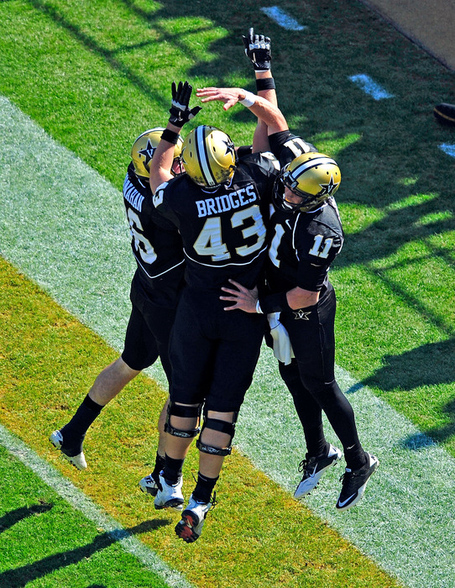 Andrew Jelks (T/G) - Jelks is best known in Commodore country for being a touted in-state recruit with major Volunteer family ties...and then picking Vanderbilt over UT anyway. Jelks redshirted as a true freshman last season, but he was a constant presence on the team's depth chart, where James Franklin slated him as the next big thing at right tackle. The Paris, TN native has excellent height (6'6") and his athleticism has earned him praise on the practice field despite his relative rawness. He gained 15 pounds this offseason and could be making a major run at a starting role at one of the tackle positions this summer.

Chase White (T/G) - White has the experience edge when it comes to filling Josh Jelesky's spot at guard, and those extra reps could also put him alongside Wesley Johnson at tackle in 2013. White began his redshirt freshman season in 2011 as a starter, but was replaced in the overhaul that eventually led to Jordan Rodgers being installed at quarterback. He's been a background player since then, but he's still a young player with the chance to make an impact as the season draws near.

Spencer Pulley (C) - Pulley started 2012 as the team's center, but was replaced by Joe Townsend five games into the season. With Josh Jelesky and Ryan Seymour leaving starting roles behind, Pulley will have the opportunity to regain a spot with the first team at a different position. If he remains at center, he'll provide key depth for the team in 2013, especially with Adam Butler moving to the defensive side of the ball.

Blake Fromang (T/G)- at 6'7" and nearly 300 pounds, Fromang has the size to make an impact, but his lack of experience may hold him back. The second-year player has displayed a mean streak and finishes his blocks well, but he may still need time to adjust to the speed of SEC play. Even so, Franklin hasn't been shy about throwing young players into the fire at offensive line, and Fromang could be the second member of the class of 2012 behind Jelks to see action.

Kevin McCoy (T/G) - Like Fromang, McCoy is another redshirt freshman who has the size and talent to make a splash from the first game of the season onward. The Floridian showed off some explosive blocking on the practice field, and his ability to recover quickly could be a key factor in vying for one of the open spots amongst the starting OL.

Barrett Gouger (6'4", 285) is a developing in-state talent that could contribute in his first year of eligibility at one of the interior positions. Will Holden (6'6", 302) has the length to be an effective tackle, but may need more seasoning before making a splash for Vandy. Delando Crooks (6'5", 290) and Sean Dowling (6'6", 280) are true freshmen are both in need of some time in the weight room before taking on SEC defenses. However, Crooks could make a splash as a run-blocker on the interior if Vanderbilt needs more depth. Ryan Brockway (6'5", 290) isn't a young gun, but the senior walk-on could see some snaps in an expanded role this season.