It's been around for more than a century, but no one under 35 drinks it. Behold, the latent crappiness of Michelob, a beer that was originally brewed for connoisseurs and now marketed to "Cool Dads" across America.

Share All sharing options for: Schadenfreude Fridays: Michelob Beer; Defining the Parameters of Brewed Mediocrity Since 1896

Schadenfreude Fridays were instituted during the Robbie Caldwell era in an effort to make Commodore fans feel better about the 2-10 trainwreck that occupied their Saturdays. Based on the German loanword of deriving joy from the shame of others, these articles explore some of the world's most spectacular failures in hopes of making the Chris Nickson era look good by comparison. For more Schadenfreude Friday articles, check out our archives.

Michelob beer has been a fixture of the American brewing landscape for over a century. Created in 1896, this pale lager was either branded for its namesake, esteemed brewmaster Michelob Michelob, or for a Czechoslovakian town that conspicuously changed its name from Michelob to Mecholupy some years after the beer's popularity began to grow. It's been a member of the Anheuser-Busch family of brews since the 19th century and has developed from a spotlight beer into a background player in bars, taverns, and saloons across the country. The brand has grown from a single brew to a line of several different tastes, branched out to adapt to the dynamic tastes of the adult beverage market, and even sponsored athletes and sporting events for decades.

And, despite all that, most beer drinkers under the age of 35 couldn't tell you how it tastes.

Michelob is a relic of years past that increasingly only gets mentioned at the bar during long-running games of "Categories." Their ads have dropped from television rotations and their product has faded away from tap lists over the past decade. You'd be hard pressed to find the original label on draft outside of its St. Louis home base. Despite being the beer of choice of a time-traveling Captain James T. Kirk, Michelob has failed to catch on with a new generation of drinkers.

Michelob has suffered considerably as the craft beer movement has expanded the suds market to a whole new level of quality and diversity. Sales of the flagship lager dropped by 72 percent from 2006-2011, decreasing from 500,000 barrels to 140,000. The numbers for Michelob Light were nearly as bad, dropping by over 66 percent in the same span. Part of this was due to a rise in sales of their new brand-diluting product Michelob Ultra, but the overall trend of declining revenue painted a sad picture for what was once a flagship beer.

The company's social media sentries were apparently the first to be scaled back. The brand's Twitter handle hasn't tweeted since February 2011, and at under 1,500 followers has made less of a viral impact than the fake account made for Kevin Ware's broken leg during the NCAA Tournament. The first official Google result for "Michelob facebook" returns a blank page hosted by the social media empire - though it does have 824 likes.

Much of the brand's capital has instead been devoted to keeping the 95-calorie Michelob Ultra afloat. The brand's marketing has manifested itself by targeting active adults - cyclists, marathoners, triathletes, and other responsible individuals who are terrified of wheat. Ultra solves a first-world problem for people who don't want to drink a beer but also need a bottle handy to take awkward pulls from when they run out of things to say at a party.

Michelob occupies a rare spot in the bad booze hierarchy. Bartles & Jaymes's wine coolers may not pack a punch, but they go down like sugary goodness poured through a rainbow. Steel Reserve tastes like seawater that's been triple-filtered through Kid Rock's trilby, but it'll give you the courage you need to fight the police. With a watery taste and less alcohol per volume than most light beers, Mich Ultra hits the rare alcoholic combination of being both bad tasting and unable to get you drunk. The impotent brew tastes like grass and won't get you silly enough to do anything fun, but the company has bet hard that this product that will carry the brand through another 100 years of existence.

That is, if Ultra even has the 4.2% alcohol content printed on its label. The brand was one of many targeted in a suit brought against Anheuser-Busch in February for having less alcohol by volume than officially listed. This revelation could further hurt the stock of a product that's being threatened by an expanding market of low-calorie, low-alcohol beers. Beverages like Miller 64 and Bud Select 55 have made inroads on Ultra's burgeoning market of beer drinkers who don't like beer, and this competition could be enough to squash Michelob's most promising line.

Ultra isn't the only new product that Michelob unraveled in order to boosting lagging sales. Anheuser-Busch executives doubled-down on the line's success by expanding it with fruit flavors in the mid-2000s. These bold twists on alcohol ranged from standard bath soap smells to exotic desert plant life.

The first additions to the Ultra label were flavors like Lime Cactus and Tuscan Orange Grapefruit. When the latter failed (spoiler alert?), it was replaced by Dragon Fruit Peach. Centuries of Trappist brewing secrets and family-guarded brewing traditions had finally ascended to its zenith, and this peak was a four-percent monstrosity that finally unlocked the awesome power of the cactus. Even the pomegranate, a fruit coveted by cultures across the Mediterranean for its natural, beer-enhancing flavor (citation needed), found a place in Michelob's master blends. The quest to create a beer delicate enough to replace the Fuzzy Navel had arrived.

This revelation led to a 10 percent boost in Ultra's sales, but it'd be unfair to pin that improvement on these new extensions alone. As a brand, Michelob has developed a reputation as a key sponsor of some of the shittiest sporting events in America. While Coors Light handles NFL duties and Bud Light drapes their logos across the UFC, Aldophus Busch's creation was the driving force behind women's golf events like the Michelob ULTRA FUTURES Players Championship and the Michelob ULTRA Open at Kingsmill. In a shrewd bit of marketing designed to cover all facets of ESPN8's eventual launch, the beer also sponsored events like cycling's Tour of Missouri, the World Poker Tour, and several teams in the U.S. Rugby Super League.

Michelob built on this sports marketing success by reaching out to celebrity sponsors. In 2002, they branded golfer Sergio Garcia with Michelob Light logos and watched the steam of a potential-laden rise to PGA stardom slowly evaporate from the Spanish duffer. After top 10 finishes in every major event of 2002, Garcia kicked off his new pact with the brand by missing the cut in four of his next nine big tournaments. Michelob celebrated their star athlete by casting him as James Bond and showcasing him in an ad where he throws garbage into the belly button of a shapely lass laying next to him at the pool. Needless to say, none of these spots had a goddamn thing to do with Michelob.

While Garcia went on to be a respected professional on the PGA Tour, he didn't carry the name recognition and championship carriage that the brand was seeking. In 2003, the brand devoted a series of magazine and television ads to 45-year old master's swimmer Paul Carter, who responded to the news by saying "no, I haven't heard of me either." That's when Michelob turned to a can't miss superstar who fit in perfectly with their target audience of runners, cyclists, and triathletes: Lance Armstrong.

Michelob Ultra signed the endurance athlete to a long-term deal one year into his underwhelming comeback attempt in 2009. As a result, the brand had the privilege of being a key sponsor for Armstrong's 23rd place finish in the 2010 Tour de France - his worst showing in the event since 1996 and his last major ride as a respected cyclist. Fortunately for the brewers, they were able to catch the icon at the height of his powers as a triathlete. Armstrong won a pair of half-Ironman events in 2012 and showcased a bright spot for the connection between Michelob and Armstrong before things took a terrible turn for the worse.

The quest to sell triathlon beer for triathlon people started off with good intentions, but Armstrong's reputation as a self-described "arrogant prick" put him closer to Barry Bonds than Bob Uecker in terms of customer relatability. After allegations arose that his body was 95% shark testosterone, the cyclist's contract with the company was not renewed. Michelob's last promotion with Armstrong - a contest in which winners earned the opportunity to pedal futilely as the seven-time Tour de France winner left them in his dust - turned out to be the Texan's last major sponsorship to date. 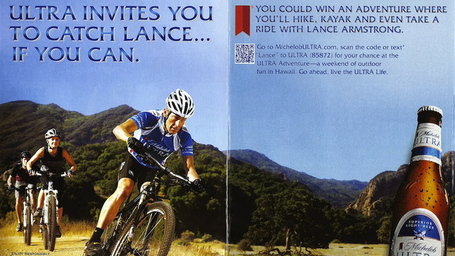 These lackluster campaigns were a turn from the brand's earlier ads that celebrated drinking, nightlife, and losing vast swatches of time thanks to the magic of beer. The Ultra lifestyle was a significant departure from slogans like "Weekends were made for Michelob" and "The night belongs to Michelob" - campaigns that enlisted Phil Collins, Eric Clapton, and...Steve Winwood to turn the beer into an upscale party lager. Over two decades, Michelob went from being the beer that fueled 48 hours worth of bad decisions into the only beer with the essential cactus taste to quench your thirst after an ultramarathon.

The brand also abandoned something called Michelob Oily, which probably was a good thing in the long run, but certainly deserves mention here: 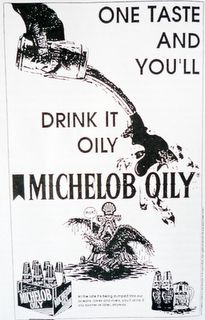 On one hand, Michelob bucked the stereotypical beer cliches when it came to their recent advertising. They weren't pushing a beer that was manly, or tough, or even pleasant tasting. On the other side of the coin, the brewery was clearly running with a fad, and while exercise and athletic endeavors are a noble cause to cater to, it seems as though the executives behind Michelob Ultra have forgotten that 1. they're still selling alcohol and 2. the American beer market will always be dominated by the sedentary. Even so, the brand is delving deeper into the "healthy drinking" movement, starting with a new line of gluten free ciders. For Anheuser-Busch, the future of a 117 year old beer is to move Michelob as far from its namesake lager as possible.

In summary, Michelob has seen sales of its regular and light beers fall by more than two-thirds since 2006. Over that span, they've introduced terrible flavors like pomegranate beer and sponsored events like women's golf and semi-pro rugby in America. They worked to pioneer the ultra-low calorie beer market only to have their thunder stolen by Miller and Coors in recent years. Their sponsorship deals with athletes led to prolonged slumps and came just in time for the awful parts of Lance Armstrong's career. Then, they got sued for overstating the alcohol content in even the lightest of their light beers.

But Michelob isn't dead yet, and one of America's oldest lagers is hoping to find a Pabst-style revival in the coming years. They're betting hard that fruit flavors and low calorie counts are the infusion that a tired brewery needs to chug on for another century. That's a long time to hope that most triathletes double as closet alcoholics, but it's comforting to know that someone's looking out for the endurance athlete in all of us.