Editor's Note: This is a sponsored post from Sportsbook Bonus. 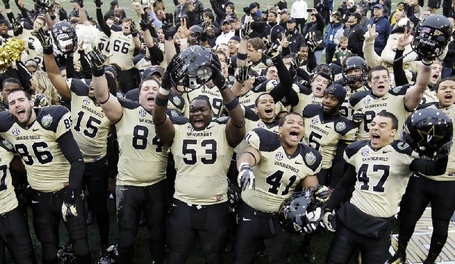 Though founded in 1890, and currently sitting with a 582-584-50 overall record, NCAAF Bowl Games were relatively few and far between for the Vanderbilt Commodores in the early days. That said, with postseason appearances in three of the past five seasons, the Gold and Black certainly appear to have turned the corner. Sitting with a 8-4 record during the 2013 NCCA Football season, has guaranteed Vandy their first three-year bowl appearance streak in school history. Thought the Bowl Game has yet to be announced, online sports bettors who visit a site like Sportsbook Bonus would be wise to back the Commodores, as they are 3-2-1 straight up in their previous six NCAAF Bowl Games. With this article we take a look at the best Bowl Games in Vanderbilt school history.

One of the most memorable NCCA football games in Vanderbilt school history occurred way back in 1955 when the Commodores appeared in their first ever-postseason contest. The setting was the Gator Bowl in Jacksonville, Florida, on New Years Eve in 1995. An estimated 36,000 fans packed the seats as the 8-3 Commodores faced the #8 ranked Auburn Tigers who came into the contest with an 8-2-1 record. Vandy head coach Art Guepe took a leap of faith and started Don Orr at quarterback – though not entirely sure he had recovered from a dislocated right elbow suffered five weeks earlier. The move turned out to be perfect as Orr tossed an 8-yard TD pass to Joe Stephenson in the first quarter and then had a 3-yard TD run to put Vanderbilt up 13-7 at halftime. Vandy would hold the powerful Tigers to second and fourth quarter touchdowns to complete a 25-13 upset victory and Orr was named the Gator Bowl MVP for Vanderbilt.

Following appearances in the Peach Bowl in 1974 (6-6 tie versus Texas Tech) and the Hall of Fame Bowl in 1982 (36-28 loss to Air Force) the Commodores broke a streak of 54 years without a Bowl victory as they captured the 2008 Music City Bowl. Playing less than five miles from their home campus, Vanderbilt battled the Boston College Eagles at LP Filed in Nashville on New Years Eve day as this contest kicked off at 2:30 PM ET on December 31, 2008. Underdogs once again, the Commodores entered the game with a 6-6 record while the Eagles were 9-4 and looking for their third straight 10-win season. Vandy would get three Bryant Hahnfeldt field goals, plus a Sean Richardson TD on a fumble recovery in the end zone; to post a razor thin 16-14 upset NCAA Bowl game victory.

While their previous five NCAA Bowl appearances were nail-bitters, the Commodores finally bowled a team over in the NCAAF postseason during the 2012 Music City Bowl. This contest kicked off at 11:05 AM ET on December 31, 2012, with the 8-4 Commodores facing the 7-5 North Carolina State Wolfpack – again at LP Field. Vanderbilt came into this contest with the 17th ranked pass defense in the Nation but it was the offense that did all the damage. Led by QB Jordan Rodgers, who passed for two scores and ran for another, the Commodores entered the fourth quarter with a 31-17 lead and the rout was on. A late NC State TD made the score look respectable but this was, for all intents and purposes, a blowout as Vandy registered a 38-24 win and covered the -7.5 point spread.

Being as Bowl Gane appearance is now guaranteed for the 2013 NCAAF season - we will most likely visit Sportsbook Bonus and back the Commodores! These are exciting times in the Vanderbilt football program and we are looking forward to the Black and Gold keeping it rolling in the 2013 NCAAF Bowl Game – whichever one it may be!