The Commodore Review: How Vanderbilt Really Looked in Their 23-21 Win Over Wake Forest

Vanderbilt got vintage performances from a pair of seniors in their final game at Vanderbilt Stadium. Carey Spear and Jordan Matthews secured their All-SEC legacies as they led Vandy to a second-straight 8-4 regular season in a win over Wake Forest.

Share All sharing options for: The Commodore Review: How Vanderbilt Really Looked in Their 23-21 Win Over Wake Forest

November must be James Franklin's favorite month. He hasn't lost during turkey season since 2011.

Vanderbilt extended their November winning streak to eight games by rallying to topple Wake Forest at home on Saturday. The win ended Vandy's regular season with an 8-4 record and will give this team the opportunity to post back-to-back nine-win seasons for the first time in school history.

Like this month's sloppy wins over Kentucky and Tennessee, a hard-fought win swept some ugly play under the rug. The Vanderbilt defense kept Wake Forest's offense from sustaining drives in the second half and the 'Dores dominated the time of possession battle by a nearly 2:1 ratio, but the team's inability to find the end zone nearly resulted in an upset loss. Vandy pounded the ball into the teeth of a Wake Forest defense that packed the box to stop Wesley Tate and Brian Kimbrow at the line of scrimmage.

Fortunately, Jordan Matthews and Carey Spear provided all the playmaking this team needed to win their third straight game over Wake. Matthews had 11 catches for 125 yards, but no statistic could accurately gauge the senior's value to this team. His catch in double-coverage - a sure-handed haul that brought back shades of his performance late in the season opener against Ole Miss - converted a 4th-and-11 play that kept Vandy's final drive alive. From there, it came down to Spear, who blasted as solid of a field goal as you'll ever see through the uprights to give the 'Dores a 23-21 win.

The game was driven by two players who were wrapping up stellar careers at Dudley Field. Matthews and Spear will both graduate this spring (Matthews, as pointed out in the comments, will graduate in December), leaving behind a big void for James Franklin to fill. The 'Dores will also lose All-SEC lineman Wesley Johnson, quarterback Austyn Carta-Samuels, their entire starting defensive secondary, standout linebackers Karl Butler and Chase Garnham, and defensive end Walker May. However, it's the loss of Matthews and Spear that could be the most troubling for this team in 2014.

There have been times in 2013 where Matthews and Spear have looked like the only reliable options in the Commodore offense. The senior wideout has combined with the also-graduating Jonathan Krause to provide 47.6 percent of this team's total offensive yardage. Add Spear to that mix, and you'll account for nearly 40 percent of the team's scoring this fall. That's a huge burden for this team to face this spring.

Vanderbilt will return talent at running back next season, but the results of the last four weeks have shown how opponents can shut down the Commodore offense when Vandy is forced to rely on its tailbacks. Jerron Seymour and Brian Kimbrow can provide a potent punch, but they'll need Patton Robinette (or Johnny McCrary) to find targets downfield to make them effective. A talented group of young receivers, led by true freshman Jordan Cunningham, will step into that void. Unfortunately, asking them to replace the production of Jordan Matthews and Jonathan Krause in their first year of significant action is a heavy request.

James Franklin will get one more game with Matthews, Spear, Krause, and Carta-Samuels leading this team's scoring attack. The date, location, and opponent have yet to be determined, but it seems likely that it'll be either in the Liberty or Music City Bowls. That'll be a special game. Not only it is Vanderbilt's first opportunity to get one class of athletes to three bowl games in their careers, but it'll represent a changing of the guard for the most successful Commodore football players of all time.

Enjoy it while it lasts, Commodore fans. Jordan Matthews and Carey Spear gave the Vanderbilt faithful one last reason to erase the bad memories of "Same Old Vandy" in their final home game on Saturday. And while Coach Franklin has this team in excellent shape to replace their talent on the depth chart, it may be years before anyone can duplicate the impact either of those two players have had on the field. 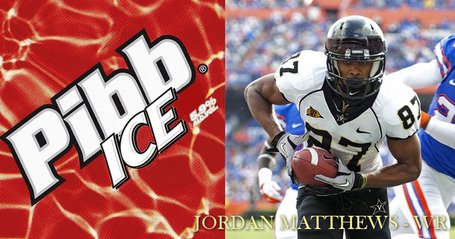 The PiBB Ice Player(s) of the Week: Jordan Matthews and Carey Spear.

We might as well name this one the PiBB Ice JMatt Award for the 2014 season. Matthews recorded the first 100-catch season in SEC history with an 11-reception performance on Saturday, and his double-covered fourth-and-11 haul gave Vanderbilt the juice they needed to drive for a game-winning field goal against Wake. That doesn't happen without Spear's efforts, however. The senior kicker nailed all three of his field goal attempts (41, 25, and 38 yards) to lift the 'Dores to victory in a game where they needed every point they could get.