Vanderbilt can erase 25 years of history with a win at Florida this weekend. What do Commodore fans need to know about the Gators with their SEC East showdown looming?

Share All sharing options for: Better Know a SEC Opponent: The Florida Gators

The School: The University of Florida

In the Last 10 Years vs. Vanderbilt: 10-0. Heh. Yeah. Vanderbilt hasn't beaten Florida since 1988, when America was riding out the final months of the Reagan administration. Average score in the past decade? Florida 37.3, Vandy 16.8. On the plus side, the Gators are only a 10-point favorite on Saturday.

The Last Time We Saw These Guys: Jeff Driskel did something that not even Tim Tebow had done before, exploiting Vanderbilt's inability to defend against the read-option en route to 177 rushing yards and three touchdowns. On the plus side, Vanderbilt held the UF offense to just 77 passing yards and a mere 9.3 yard-per-carry average. Florida 31, Vandy 17.

Most Potent Offensive Threat: Tyler Murphy. Murphy, who came on in relief of injured quarterback Jeff Driskel this fall, is the headliner on a Gator team that doesn't have their usual roster full of weapons. Leading rusher Mack Brown is on pace for a sub-1,000 yard season and has a 3.7 YPC average so far in 2013. Solomon Patton and Quinton Dunbar are high-level wideouts, and they've struggled to produce under Murphy in the last three weeks, combining for 234 yards in their last three games (for comparison, Jordan Matthews and Jonathan Krause have 563 in the same span against similar opponents).

That leaves Murphy as the most dangerous threat to a Vanderbilt defense that can look great one week and awful the next. The junior hasn't been great, but he's been passable at QB for the Gators. Unfortunately, a caretaker quarterback isn't what Will Muschamp (or almost any coach) needs to survive in the SEC, and that's led to three straight losses for UF. Still, Murphy has the experience and composure to outplay a redshirt freshman making his first start in Gainesville, and he has the wheels to pick up first downs on the ground. That could be enough to produce a familiar outcome in the Swamp.

Most Potent Defensive Threat: Dante Fowler, Jr. Vanderbilt got a break two weeks ago when Georgia's Ray Drew was ejected from an eventual Commodore upset thanks to a ridiculous targeting call. They probably won't have the same luck against an equally disruptive end in Florida's Fowler. The sophomore has been ferocious for Muschamp's defense this year, working through double teams to apply pressure in the pocket and stop running plays before they can get to the line of scrimmage. He can keep Patton Robinette on his toes all afternoon - and for a young quarterback that hasn't yet figured out his timing, that's a scary thought.

Matchup to Watch: The Vanderbilt offensive line versus Patton Robinette's timing. Robinette will make his second start in place of the injured Austyn Carta-Samuels on Saturday, and he's still learning the quarterback position on the fly. While his arm and accuracy have been sharp, he's missing windows of opportunity to get the ball downfield for big plays. A big part of his inability to settle into a groove last week was the fact that he rarely had any breathing space in the pocket. Robinette would make his drop, look downfield, and then have an Aggie defender draped on him a second later.

The Commodore offensive line will have to improve from last week's performance to give Robinette an honest shot at leading this team to an upset in Gainesville. The freshman has the talent to lead this team, but he'll have to grow before he can get there. It'll be tough to learn anything - other than what the turf at Ben Hill Griffin Stadium tastes like - if he spends most of his Saturday on his back.

Interesting Fact: Since Vanderbilt last beat Florida, the Gators have played in 24 bowl games - including seven BCS bowl games, inducted eight former players into the College Football Hall of Fame, had two Heisman winners, and won eight SEC titles, 12 SEC East titles, and three national championships. Vanderbilt, in that span, played in the Music City Bowl twice and lost a Liberty Bowl. Other than that, these teams are virtually identical.

Bonus Fact!: Did you know this weekend is Florida's homecoming? Here's the flyer from their environmental engineering graduate program: 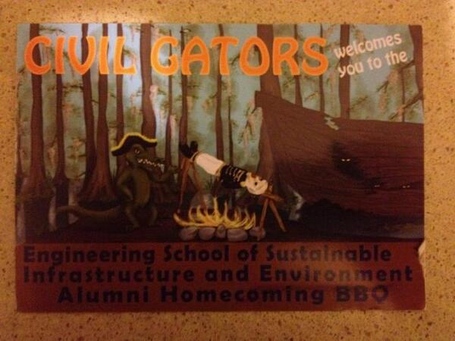 See? They're nerds too!

If Florida wins, we: go back to that trusted bottle of bourbon Vanderbilt fans all keep for Gainesville-related matters. 25 years of losing would be tough to take, especially with the Commodores facing one of the more vulnerable Florida teams they'll have the chance to play. James Franklin has a great opportunity to stake a claim for a #BrandNewVandy on Saturday. A loss, while familiar, would still be disappointing.