Vanderbilt is getting a state-of-the-art practice facility which includes the first indoor practice field the team has ever had. Here's how it looks, according to a Wesley Tate tweet.

Part of the renovation package that got football coach James Franklin to stay in Nashville is set to open soon, and Vanderbilt tailback Wesley Tate gave fans a sneak preview on Monday. 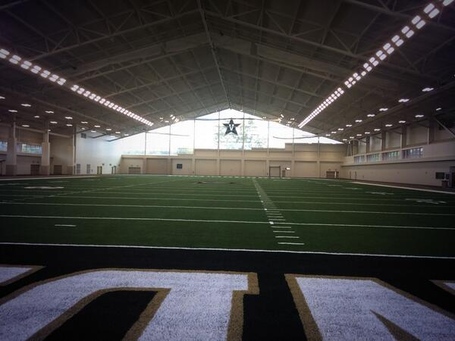 The Commodores will soon cut the ribbon on a multipurpose practice facility that includes an indoor football field and 300-meter indoor track. The athletics center had been scheduled for a November first ribbon cutting, but small delays pushed that original estimate back. Progress started on the building nearly 14 months ago in September of 2012. In addition to hosting football practices, the facility will also be home to the university's soccer, lacrosse, and track programs as well as various club and intramural sports.

The development of the building, as well as the renovation of existing facilities like the student recreation center and student-athlete locker and weight rooms, were spurred in part by the university's commitment to keeping James Franklin comfortable as head coach of the Commodore football ball. These facility upgrades won't just keep the school's existing athletes happy, but should also serve as a key recruiting tool for future 'Dores.

There's been no official announcement on a new ribbon-cutting date, but Tate's tweet suggests that the facility should be open to Vanderbilt's athletes soon.