The Commodore Review: How Vanderbilt Really Looked in Their 22-6 Win Over Kentucky

Vanderbilt earned bowl eligibility with an ugly 22-6 win over Kentucky on Saturday. However, the offense looked out of sorts and ineffective in the victory. Can the 'Dores figure out how to score points in time for this week's game against Tennessee?

Share All sharing options for: The Commodore Review: How Vanderbilt Really Looked in Their 22-6 Win Over Kentucky

Vanderbilt got the win on Saturday, but the Commodores didn't answer any of the questions that an underperforming offense had raised against Florida.

The 'Dores struggled to find a rhythm with the ball, running poorly and failing to sustain drives until late in the game in Saturday's 22-6 win over Kentucky. Austyn Carta-Samuels returned to the lineup, but the coaching staff's limited confidence in his ability to overcome a leg injury shone through in Vandy's playcalling. Most of ACS's work was limited to receiver screens and short passes, and while he completed 19 or 23 passes, he averaged just 7.67 yards per attempt in the win. He was gaining 8.49 yards per attempt on the season coming into this game.

That conservative gameplanning looked great last week when Patton Robinette's confidence needed to be built up and the Commodores were able to force turnovers that put Vandy deep in Florida territory. Against Kentucky, it made it seem like the 'Dores were slipping off the gas pedal. Was the team trying to softly break Carta-Samuels back into the lineup by taking some of the weight from his shoulders? Or did this team decide to rely on a formula that led Vanderbilt to their first win in Gainesville since 1945 a week before?

Maybe it's nitpicking to complain about a win in which Vandy's quarterbacks combined to complete 80 percent of their passes and the offense failed to turn the ball over for the second straight week. There were lots of great performances in the home victory. Jordan Matthews had a typically great game, while this team's defense - particularly along the defensive line and in the secondary - came up huge just like they had against Florida.

The problem with this weekend's win was that it left plenty of questions as a showdown with Tennessee looms. The Volunteers are 4-6, but a victory against their in-state rivals would keep their bowl hopes alive and serve James Franklin some humble pie - a request more and more SEC fanbases have been turning in lately. UT will be a much tougher test for these 'Dores, and they'll have the advantage of playing in front of a faithful fan base in Knoxville.

Vanderbilt converted on less than 30 percent of their third downs against Kentucky. The team's offensive line, which looked stellar versus Florida, got pushed around against the 'Cats and failed to clear lanes for Jerron Seymour and Brian Kimbrow. Was that a delayed adrenaline dump that was tied to a big win in Gainesville? Or was it a return to the inconsistent play that plagued this team earlier in the season?

If it's the former, then this team should have no shortage of motivation with the Vols looming. If it's the latter, then the Commodores will have plenty to deal with in Knoxville, especially against a team that's had two full weeks to prepare for them. Qualifying for bowl games is a big step at Vanderbilt. Beating Tennessee for a second straight year could be even bigger. 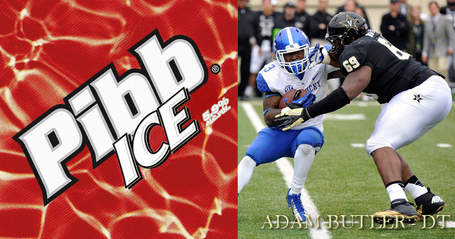 The PiBB Ice Player of the Week: Adam Butler

Butler had the game of his young career on Saturday, playing a role in seemingly every big defensive or special teams play against the Wildcats. He blocked the extra point attempt on UK's only touchdown of the game, leading to a Steve Clarke return that swung the momentum back to Vanderbilt's favor early. He then used the two tree stumps he calls arms to bat down a pair of Jalen Whitlow passes at the line of scrimmage, and even recorded a pair of tackles that led to a combined -7 yards of Wildcat offense. The redshirt freshman passed senior Jared Morse on the depth chart despite only switching over to the defensive side of the ball last spring. He's got a lot of room to grow, and it's scary to think about how good he could be if he can build off of Saturday's performance.