The Commodore Review: How Vanderbilt Really Looked in Their 34-17 Win Over Florida

James Franklin cemented his legacy in Nashville thanks to a win that Vanderbilt hadn't notched since 1988. The Commodores beat Florida in the Swamp to improve to 5-4 on the season and get one step closer to a bowl game thanks to a stout defensive effort.

Share All sharing options for: The Commodore Review: How Vanderbilt Really Looked in Their 34-17 Win Over Florida

Coming off of a 56-24 stomping at the hands of Texas A&M, James Franklin and offensive coordinator John Donovan had a full 13 days to find a way for Patton Robinette to lead this team to a season-reviving win. They did just that with a conservative, confidence-building gameplan and a superlative effort from a defense that severely needed a boost in confidence.

Vanderbilt never let Florida quarterback Tyler Murphy get comfortable in the pocket, sending constant pressure to keep the struggling quarterback from finding a rhythm. Donovan's offense was able to secure the opposite for Robinette. Two weeks after the redshirt freshman was battered by the Aggies, the Commodores leaned on short passes and a grinding run game to give this team the offense they needed to notch the biggest win of Franklin's tenure so far.

The Commodores were without the services of standout receiver Jonathan Krause, but it didn't matter for a team that never had to play from behind. Vandy used conservative playcalling and stellar field position thanks to three Murphy interceptions to earn their first win in Gainesville since 1945. After decades of playing the sacrificial lamb, the 'Dores finally gave the Gator alumni a little rain for their Homecoming parade.

Vanderbilt got strong performances across the field in the win. Robinette kept his cool in the pocket, preventing mistakes and failing to give Florida a chance to capitalize on a momentum-swinging turnover. Jerron Seymour continued to play bigger than his 5'7" frame, and while he only averaged 2.6 yards per carry, seven of those touches resulted in either first downs or touchdowns. Jordan Matthews caught 83 percent of this team's passing offense, but only accounted for 45 yards in a game where this team scored 34 points.

That's thanks to a stellar showing from this team's maligned defense. Behind them, Vandy accounted for 86 yards on interception returns and another 55 yards lost by Florida due to sacks. While the stat sheet suggests a dominant Florida win - 344 total offensive yards to Vandy's 183 - anyone watching the game saw a contest that was effectively over by the time the fourth quarter rolled around.

Of course, Vanderbilt fans have learned to never breathe easy before the final whistle, especially in Gainesville. Saturday's win will begin to change all that. James Franklin is pulling out the wins that Bobby Johnson couldn't before him. He's protecting leads as an underdog and avoiding the trap game upsets that kept the 'Dores out of postseason play for a 25-year span at the end of the last century. This year's season opening loss to Ole Miss notwithstanding, Franklin's 2013 team is giving fans a reason to be confident in this program.

Now, Vanderbilt will roll into the easiest stretch of their 2013 schedule. Back in July, the three-game lineup of Georgia, Texas A&M, and Florida looked like the toughest test of the year. The Commodores got through that stretch at 2-1, and while the Gators and Bulldogs have struggled this season, Vanderbilt's performance, especially without their senior quarterback, has been impressive.

The defense turns up. Florida may have passed for over 300 yards, but the Gators had twice as many turnovers as touchdowns in the Swamp this weekend. The 'Dores used interceptions to build an early lead and then got massive pressure from their linemen to keep Tyler Murphy from leading Florida to a comeback win. UF's penultimate drive reached the Vandy 41-yard line and faced a 3rd-and-10 with this game still in reach. They ended that drive two plays later, thanks to a turnover on downs, on their own 20-yard line. That's how you respond to pressure.

Patton Robinette, game manager. "Game manager" may be a cliche title for a quarterback, but that's exactly what Robinette did on Saturday. He executed the gameplan laid out for him and kept Vandy's momentum alive by avoiding mistakes and coming up big when this team needed him. His eight and 19-yard scrambles kept this team's opening drive alive and set the tone for the rest of the game. The same can be said about his 23-yard pass to Jordan Matthews and fourth-and-one run in the seven minute drive that ultimately decided this game. Robinette may have only gained 83 total yards, but his impact went far beyond that.

Jordan Matthews's usage takes a hit. Matthews may have only caught five passes on Saturday, but his value to the team went well beyond that. The All-SEC senior drew double-coverage all day and kept the Gators from selling out and fully committing to stop Vandy's grinding rushing game. While that strategy led to a win, it had a negative effect on Matthews's stats as he had just five catches for 45 yards in Gainesville. The senior leader will be the first to tell you that stats are meaningless, especially in the face of a key win. However, he's running a tight race for All-SEC and All-American honors, and he may need all the help he can get to sway voters for a first-team nod. It may not mean much to Matthews, but a legion of Commodore fans are pulling for him to bounce back in a big way against Kentucky and give this team another banner to hang at Vanderbilt Stadium.

Punting is still an issue. The box score suggests that Taylor Hudson finished the day with an average of nearly 50 yards per punt, but the first-year kicker gave fans plenty of reasons to believe the competition between he and Colby Cooke is far from over. Hudson had some bad kicks bailed out by Florida penalties and fortunate bounces in a game where the Commodores relied on field position to keep the Gators from finishing their drives in the Vandy end zone. The sophomore did a good job of keeping an opportunistic Florida team from blocking his kicks, but there is still plenty of room for improvement in that aspect of special teams. 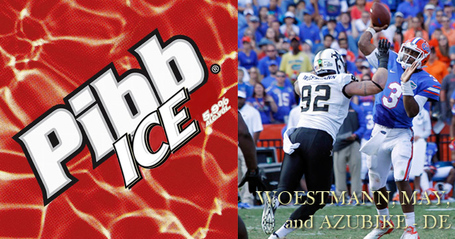 The PiBB Ice Player(s) of the Week: Kyle Woestmann, Walker May, and Caleb Azubike

It took months, but Vanderbilt finally got all three of their wild dog defensive ends on the same page on Saturday. Woestmann, May, and Azubike took advantage of a Florida line that has struggled with injuries this season, blasting through the trenches to make Tyler Murphy's day miserable. The three combined for four sacks (and -44 yards!), three quarterback hurries, and a forced fumble as their pressure led to Murphy's game-changing mistakes. Saturday's success was a team effort, but the Commodores' defensive ends set the pace early by showing that Vanderbilt had no interest in being pushed around in the Swamp.