Vanderbilt will travel to College Station for their first-ever game against Texas A&M. What do Commodore fans need to know about the Aggies leading up to this SEC matchup?

Ranking: 14th in the AP poll and 15th in the Coaches'. The formulas have them rated 17th in the Real Time RPI and 23rd in Warren Nolan's rankings. You'll recognize these rankings as being nearly identical to Georgia's ratings coming in to last week's game. Unlike Georgia, A&M still has their starting tailback and wide receivers intact for Saturday's game.

Mascot: Aggies. Much like Vanderbilt celebrates the status of its founder by adopting his mostly made-up nickname, A&M honors their land-grant heritage and agricultural roots by calling themselves the Aggies.

Conference: The ESS-EEE-CEE. Formerly the Big 12.

All-time vs. Vanderbilt: 0-0-0. Vanderbilt will get to experience Kyle Field, the most goddamn patriotic stadium in the SEC. 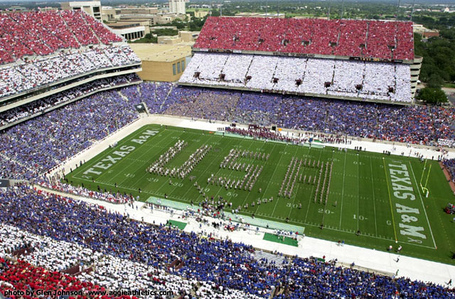 In the Last 10 Years vs. Vanderbilt: 0-0. Johnny Manziel's rise to Heisman Trophy winner peaked in A&M's 118th season without having to face the Commodores. Coincidence? Absolutely.

The Last Time We Saw These Guys: We just went over this. Come on.

Most Potent Offensive Threat: Johnny Manziel, quarterback. Mike Evans is a beast, but every Commodore fan understands just how badly an uber-mobile quarterback like Manziel can gash this team, even if he's nursing a sore shoulder. While a veteran-heavy Vandy secondary should be able to give Evans a challenge, this team's undermanned linebacking corps will have their hands full with a player who can routinely ring up more than 500 yards of total offense.

Johnny Football is running for nearly 70 yards per game, and Vanderbilt has yet to show that they can stop the read option or anything closely resembling it. Manziel can easily keep this team off-balance with his legs. When Vanderbilt's secondary has to creep up in order to take some pressure off of a Chase Garnham-less linebacking squad that opens up plenty of room for opponents to throw downfield. Don't expect A&M's 46.9 point-per-game offense to slow down next weekend.

Most Potent Defensive Threat: Darian Claiborne, inside linebacker. A&M's true freshman linebacker is adjusting well to the college game. In his last three games, he's led the Aggies with 26 total tackles and added 2.5 tackles for loss. TAMU hasn't been getting much from their defense, and even Sam Houston State was able to score 28 points against them. However, you can't fault Claiborne, a first-year player putting in work up the middle for the #15 Aggies.

Matchup to Watch: Whoever is playing quarterback for Vandy vs. the Texas A&M secondary. On the plus side, A&M is also giving up about 34 points per game, and their weaknesses through the air could be Vanderbilt's key to an upset in College Station. Ole Miss had 329 yards and five touchdowns through the air in their near-win two weeks ago. A.J. McCarron had 334 yards and four touchdowns in Alabama's win earlier this year. McCarron and Bo Wallace are a tier above Vandy's quarterbacks (although Wallace and Carta-Samuels are closer than you'd think), but this still suggests that the 'Dores can exploit the Aggie defense through the air. That will be a tougher task if redshirt freshman Patton Robinette is behind center, but it could provide a softer transition for the young quarterback than getting thrown to the wolves against some of the SEC's other top 25 programs.

Interesting Fact: Vanderbilt has played seven other Texas colleges in their program's history. This includes Texas, SMU, Rice, Texas Tech, North Texas, TCU, and Southwestern. Of these opponents, the only Lone Star State team to have an all-time winning record over the Commodores is TCU (3-1).

Bonus Fact!: College Station is home to the first Freebird's World Burrito restaurant outside of California. Freebird's offers a seven-pound Super Monster burrito, and their slow diffusion into non-Texas areas should be anxiously awaited and applauded by everyone looking for a new meat delivery system for their bodies.

Triple Fact!: Manziel is only a Texas strip club visit with Floyd Mayweather away from becoming the Football Beiber that Scripture had warned us about.

If A&M wins, we: take a long look at Vanderbilt's quarterback situation. The Vandy reaction will hinge on who is taking snaps for the 'Dores this weekend. If Carta-Samuels starts and looks healthy, but is ineffective in a loss, the rumblings for Patton Robinette to replace him will start to grow. If Robinette starts and gets flustered by a defense that has had the chance to game plan around him, then pressure will build on ACS to get healthy in time to lead this team to a bowl game. If the Commodores lose, expect the first reaction to be an examination of Vandy's quarterback situation and a potential competition between Carta-Samuels and Robinette going forward.