The Commodore Review: How Vanderbilt Really Looked in Their Upset Win Over #15 Georgia

Vanderbilt took advantage of the opportunities that Georgia gave them to post the biggest win of James Franklin's career. However, they wouldn't have gotten there if it wasn't for a big push from a vastly improved defense.

Share All sharing options for: The Commodore Review: How Vanderbilt Really Looked in Their Upset Win Over #15 Georgia

In the end, it was a James Franklin guy who delivered the biggest win of the Vanderbilt coach's professional tenure.

After three years of quarterbacking from Bobby Johnson recruits like Larry Smith, Jordan Rodgers, and Austyn Carta-Samuels [Carta-Samuels was never offered by Vanderbilt before transferring to Nashville after Franklin had been hired.], Franklin guided the 'Dores to their first win over a ranked opponent since 2008 with Patton Robinette, a member of the vaunted Class of 2012, behind center. The redshirt freshman, who was playing in relief of an injured Carta-Samuels, rallied his team from a 13-point deficit in the fourth quarter to stun #15 Georgia 31-27 on Saturday.

Robinette was thrown into the fire in his first meaningful action as a Commodore QB, but he passed the tests that a tough Bulldog defense threw at him. Though his timing was off - the freshman seemed to miss some big-play openings by a fraction of a second before throwing (or running) into rapidly-closing holes - he still managed to keep this team together and allowed them to capitalize on Georgia's mistakes in the win. He finished with 107 passing yards, one rushing touchdown, and one interception - that caromed off of tailback Brian Kimbrow's hands - to notch the first win of the Robinette era.

While the win could be the difference maker in a season where bowl eligibility was in question, we still need to view this upset in perspective. Lots of things had to go right for Vanderbilt to even have the chance to put together a fourth-quarter rally. The Commodores scored touchdowns on a pair of drives that were either stalling or dead to rights before questionable targeting penalties gave the offense new life. Fourteen more points came from Georgia's special teams mistakes. It's reasonable to suggest that 28 of Vanderbilt's 31 points could have been prevented if the Bulldogs had played smarter football.

Even so, Vanderbilt still had to take advantage of those opportunities - and they did. Jerron Seymour looked like a feature tailback by providing Robinette some breathing room with big runs in the second half. Jonathan Krause stepped up when triple-coverage schemes on Jordan Matthews left him with just one man to beat downfield. The offensive line, which fell apart at times in the first half, came up big to protect their rookie signal caller.

More importantly, this team's defense kept Georgia from capitalizing on opportunities on the other end. When Robinette was picked off in the third quarter, a Bulldog touchdown would have spelled disaster for this team. Instead, the maligned Commodore defense forced a three-and-out to erase the offense's mistake. When Georgia led 27-24 and had the chance to run out the final 4:44 of this game for the victory, the Wild Dogs came up big again, forcing the three-and-out that ended in UGA's game-changing fumbled snap.

In all, Vandy held UGA's high octane offense to 13 total yards in the fourth quarter. That came against a depleted Bulldog roster that was missing starters at almost every skill position except quarterback, but it's still a major step in the right direction for Bob Shoop's squad. Aaron Murray had thrown for nearly 300 yards per game against the Commodores in the first three years of his college career. On Saturday, Vanderbilt held him to just 114.

That's exactly the kind of growth that this team needed to show in order to get their season back on track. Last weekend, one team shot themselves in the foot with stupid mistakes and questionable penalties that eventually turned a big win into a crushing defeat. This time, it wasn't the guys wearing black and gold. 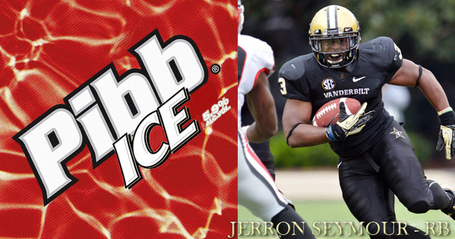 The PiBB Ice Player of the Week: Jerron Seymour

When the Vanderbilt offense needed someone to take the pressure off of Robinette's shoulders, Seymour came through. The redshirt sophomore rushed for 63 yards in the second half to give the Commodores the space they needed to make their short-range passing game work. That included his patient, game-winning dash off the left tackle for a 13-yard touchdown late in the fourth quarter. He's not Zac Stacy, but Seymour is proving to be a solid SEC-caliber tailback early in his career.